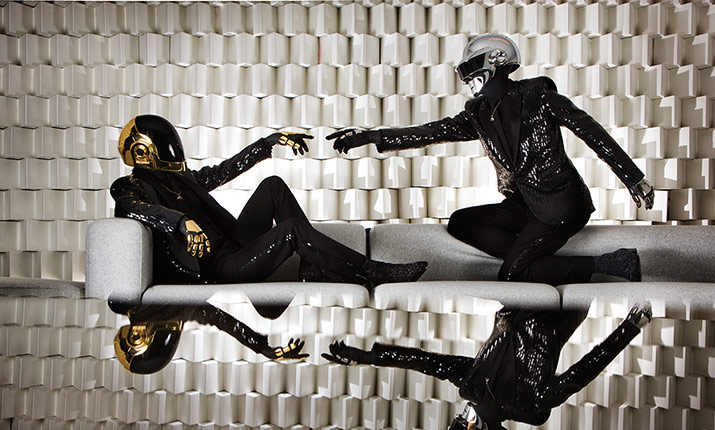 For those interested in getting a bite of the roots of what we rage out to, Chilly Gonzales has the session you’re looking for. In fact, he’s dedicating his first Beats 1 show to two musical pioneers: the shiny duo known as Daft Punk. And in addition to being a worthy dedication, it also makes sense given Chilly’s recent collaborations with the robots. His work on “Give Life Back to Music” and “Within” off of Random Access Memories straddled the worlds of EDM and melodic piano respectively.

But what goes deeper in this show on Beats 1 (which is at the head of Apple Music’s station offerings) is how influences get handed down from decade to decade, and what changes about how we perceive them. According to Chilly, one of the hardest things to do is to take some older style elements and merge it with what’s cutting edge and rebellious about the current musical climate. And this is what he values Daft Punk for doing. Largely with Random Access Memories, which was, for the robots, a record as groundbreaking in their development as perhaps Kid A was to Radiohead.

Boys Noize and Tiga even join the party for some minutes to discuss what Daft Punk’s musical DNA means to them. It’s interesting perspective given how influential the daft metal clad pair have been on Electronic Dance Music as a whole. The session ends with a fitting cover of “Something About Us” from Chilly Gonzales. Below you’ll find some segments of the session, with Chilly discussing the story of Daft Punk’s namesake as well as his personal connection to their music.

“Daft Punk’s first album came at a time when I didn’t really respect electronic music. I had made the mistake that many instrumental musicians make. I didn’t believe music made by machines was equal to playing music on a piano, but when I heard Daft Punk’s ‘Homework’ this album showed me that music could be conceptual and playful and almost a modern day equivalent of punk rock, and that’s where the name Daft Punk really hit me. There was a punk part, and there was a very musical easy listening reverent Daft side, and this combination of the slightly ridiculous and the conceptually bold is what Daft Punk means to me.”

“The subject for today is Daft Punk. Funky, sad, French robots who elevated music to the level of conceptual art. These robots know that they can never really be human, so their take on funk, disco, soft rock or 80’s pop never sounds nostalgic. It’s more like a dream of the future. In every Daft Punk song you can hear timeless musical techniques and for the next couple of hours I’m going to try to highlight some of those and connect them to the music before. There’s no mistaking the deep feelings behind those songs. Plus, I know what they look like without their helmets on…”