Your EDM Interview With EOTO, Headlining Avalon Hollywood This Friday

My first time seeing EOTO was last year at Serenity Gathering, a small transformational festival in Southern California. Their live improvisational style was at such ends with every other DJ on and off the lineup that I was wondering why they haven’t played bigger venues like the Hollywood Palladium, though they have played Red Rocks.

Still, it’s exciting to have them in an LA club like Avalon that has hosted a lot of live acts before like Modestep and Infected Mushroom. Before their show on Friday, we had to reach out to ask some questions about their methods around crafting the perfect show. (Note: these questions were emailed, otherwise I would have been smart enough to stop referring to their sets as “mostly” improvised.)

Check out our interview below!

How long have you guys been playing music collectively? How important would you rate experience against innate talent?

We’ve each been playing about 30 years each. Travis started on percussion and moved on to playing percussion and drums professionally, but has always played some keys, bass and guitar along the way. I started playing drums and percussion in clubs since I was 13.

Experience and talent account for lots of different things. I’ve seen lots of incredibly talented people at a really young age and take it for granted and they still play great but never improved to another. I think it’s easy to take it for granted when it happens too easy, too early.

Experience works out if it’s a constant sum of learning from experience. I’m so thankful for the different live and studio situations that I’ve been in with all different kinds of music. The confidence level to make every experience a positive one becomes better, because you take into account the possible roadblocks and always have other situations to back that up.

When the talent and experience push each other from an inspired place, you just see the artistry grow in leaps and bounds.

Playing in a club has to be different than on an open stage at a festival. What’s the biggest difference?

Clubs tend to be more intimate. Most of the time, you have your crowd that has come specifically to see you. If you have a solid club show, the atmosphere has an extra layer of something special that has just happened.

An open stage at a festival feels like you’re potentially reaching a wider audience. Sometimes it affects your play in a generalized sort of way – you do things in your trickbag within a shorter time since you have less time to make an impact. It can be good, but really, staying true to what you do is always going to come off best.

Where do you draw your influences from?

I know you guys do a lot of improvisation during your sets; how do you figure out where to start?

We only do improvisation during our set. It’s the thing that makes us different from any other musical act that we can think of. Lots of new people that come to see us think that we have songs that we’re recreating live, but there’s really nothing in the past that we’ve done before that we’ve rehearsed or tried to recreate. We don’t even rehearse, ha. We don’t have anything pre-recorded in our Ableton set up. No clips, no loops,…everything you hear is stream of conscience between me and Travis, listening to each other or feeding off of the crowd, and creating songs live in the moment. Our entire conversation at the beginning of the set is “how many BPMs do you want to start with?”. And then we start, and we finish 2 hours later. The band and the audience are going on an uncharted musical journey together. If I drop in and sing some lyrics from a song, I treat it more like an acapella being dropped into a new remix – completely different sound and beat that we’ve created underneath it.

There’s so much that goes into an EOTO set, between the live setup, the lights and your own sound. If you had to pick one element other than music that you need for your sets, what would it be?

Ableton software has been essential for us to pull this off. It allows us to record live into the computer and manipulate whatever music that we’re playing in a live setting. We can speed things up and slow them down in the moment. We can stutter them out. We can put all kinds of effects on our instruments live. And we can layer so many sounds and ideas in the moment. What takes producers days and weeks to do in the studio, we’ve found ways through the software to do in a live situation. It’s really another instrument that we’ve both gotten good at playing and we’re always pushing it and creating new ideas for it everytime we tour.

Every set is different, but you have to have some sort of “go to” when you feel in a groove, yeah?

We have some things that we used to fall into patterns of night after night, like, we would always be sure to do one middle eastern sounding groove, or something that involved a Sitar sound, but really our parameters fall into BPMs and styles of music. Throughout any performance we hope to cover Glitch Hop, Dubstep, House, Trap, with a drum jam close to the end of the set. But if we see a crowd latch on to a particular thing that we’re doing, we work it to a place where we can stretch out from there and take the music to other places. Or if it’s just the right thing to do for longer than normal, we’ll dive in and take that thing to another level.

Your sets are mostly improvisation, so how does that translate when you’re actually recording music?

Our sets are all improvisation:) Really the reason why we emphasize that so much is because as many live musicians that you might see playing alongside a lap top, they are always playing over tracks to a song, while maybe getting the freedom now and then to solo over a pre recorded section. It’s not good or bad or better or worse, it’s just that we’re probably the only ones doing an all improvised show every time we play. To hold improvising for a dance crowd for 2 hours at a time is something few musicians or producers would ever challenge themselves with. Too many opportunities to crash and burn and maybe not look so artistic or polished. Ha. It’s scary but we’ve probably done over 1000 shows by now so we go out there with a lot of confidence that we can hold it and throw down

The way that translates to recording is that we’ll set up like we do live, and play a groove in the moment for 10 minutes, instead of 3 minutes. Then we take the best 5 minutes of that and go back and clean up any volume jumps or pops or clicks, or straight up mistakes that might have happened. We might dial in a certain effect or EQ better or turn off microphones that were on but just picking up ambient noise.

We record all of our live shows (livedownloads.com). That’s the best way to see our progression after over 10 years of playing together.

If you want to see EOTO at Avalon tomorrow, you can buy tickets here! 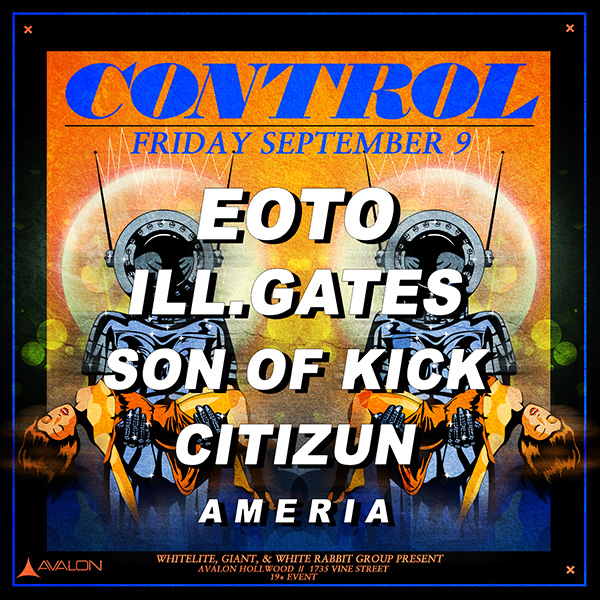 ZHU’s Indiana Debut Was One For The Books!

ZHU's Indiana Debut Was One For The Books!