The selective hunting and repositioning of certain elements of music into new contexts has been considered an art form for quite some time now, and rightfully so. The art of sampling has brought two of the most popular genres in the world today to fruition. Hip-hop, and of course electronic dance music, might not exist today if it weren’t for the invention of samplers. Although sampling now isn’t the novelty it used to be, what with sample packs coming out everyday, it’s still important to recognize the history that has built the foundation to he music we experience today.

Sampling became the most popular when commercially produced, cheaper samplers became more accessible to the general public. It was then that old funk and rock breaks were sampled to create completely new songs. While the list of sampled songs is very extensive, there are a select few that have been sampled hundred of times. As you can see from the chart below, the top ten most sampled tracks have been put into thousands of different songs, allowing artists to create thousands of unique interpretations of the original tracks. 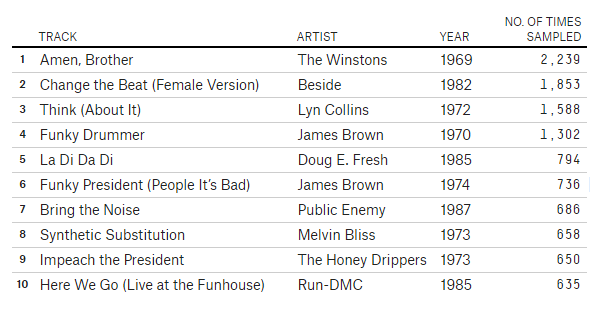 The first, “Amen, Brother” has almost single handedly built both electronic music and hip-hop. Now dubbed THE “amen break,” because it is used so much, is the foundation to drum n bass and incalculable hip-hop tracks. Artists ranging from Skrillex, to Tyler, the creator, to  Slipknot have sampled the track. Take a listen to one of the most sampled breaks in histroy below:

A recent example of the amen break being used in a track is in NGHTMRE‘s remix of RL Grime’s “Aurora.” It’s natural for listeners to think that NGHTMRE simply used a simple Drum n Bass sample at 0:51 in the track, but in fact the sample comes from the 1969 track. This only goes to show just how significant the amen break has been to the evolution of electronic dance music. Take a listen below and see if you can spot the sample:

The second most sampled track is “Change the Beat (Female Version).”

This one could be hard to catch if you didn’t know what to listen for. The sample is only a split second, but has you can see from the chart earlier in the article, has shaped hundreds of songs. Some of those songs have been sampled by some of the biggest artists today such as Justin Bieber, and Macklemore. The sample I’m speaking of is a famous record stop heard at 3:37 in the video provided below:

A lot of producers, artists, and DJs use the record stop to scratch with, allowing for the sample to pop up in countless tracks such, a chief example being at 0:57 of Pretty Lights’ “Finally Moving,” which also makes use of a few other samples to create an entirely new track:

It’s easy to find the samples most used in the third most sampled track, “Think (about it).”

As you listen to the original, you’ll hear multiple sections of the track that have been made famous in other monumental tracks. The first one is the small break at 1:22 which has an iconic drum break and yell featured in countless tracks. The lyric, “It take two to make a thing go right, it take two to make it out of sight” is also sampled in hundred of songs. Take a listen to the original track below and you’ll be able to recall a profusion of tracks that have used this song as a sample:

Some of the most famous artists to sample the track are J. Dilla, Kanye West, Jay Z, and Snoop Dogg, just to name a few. One of the most noteworthy, recent tracks that has sampled “Think (about it),” is Skrillex and Mr. Oizo’s “End of The World.” Right off the bat, you’ll hear the symbolic drum break. Take a listen for yourself:

The other seven songs of the top 10 most sampled tracks paint a similar picture. Multitudinous artists have used little snippets from the tracks “Funky Drummer,” all the way down to “Here We Go.” Many samples show up in electronic music, too, like the vocals found in the Doug E. Fresh song, “La Di Da Di,” which can be heard before a lot of drops in electronic music. Whether it be the “Hey” heard in “Funky President,” or the drum break introduced by “Synthetic Substitution,” the art of sampling has shaped the music we love today and sure is not going to stop.