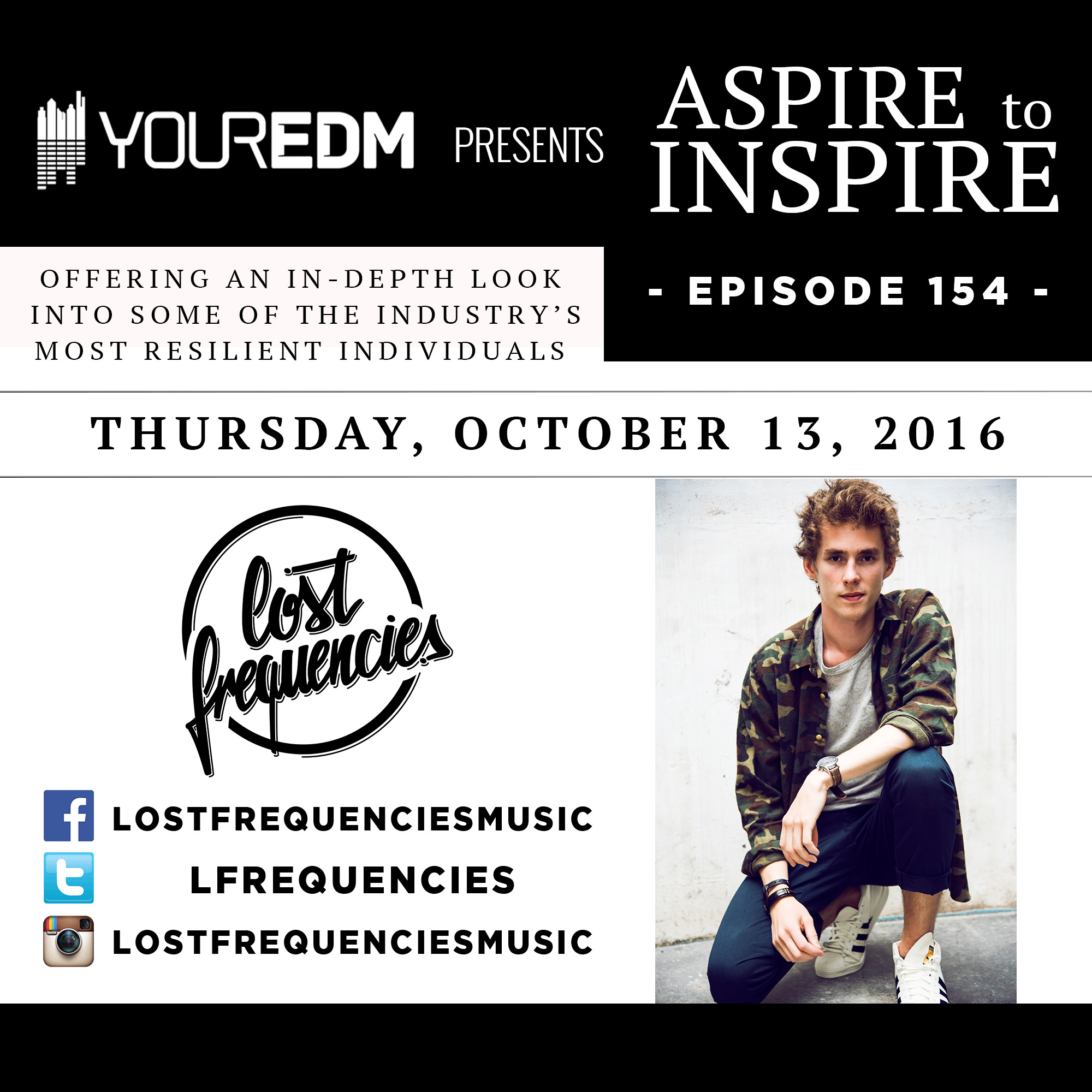 These days there are so many outside forces that try and deter us from chasing down our dreams. Whether it be from naysayers telling us it won’t work out, seeing others fail to achieve firsthand, or fear itself, we are often talked out of taking a risk. Chances are it comes from a place of wanting to protect ourselves, but where would we all be if no one took a chance?

Felix De Laet, Belgian artist better known by his producer/DJ name, Lost Frequencies, never let his fears or the negativity of others dictate his journey as he strove for success.

Growing up, Felix attended a boarding school— an upbringing he says wasn’t always the easiest. However, this was where he first discovered his love for electronic music. It wasn’t long until his future started to take the shape of a career in music.

“I really liked electronic music from the start. I was in a boarding school growing up and everybody was listening to that kind of music. I was really into it then, but when I got my computer I had the opportunity to produce things myself. Soon it was pretty obvious that that was what I was going to do. I had been listening to it through all of my youth.”

Soon enough, Felix found himself at a crossroads. With his highly successful single “Are You With Me” taking over the radio waves across the globe, the choice to either continue with school or immerse himself in the music weighed on his mind.

With many artists, support, or lack thereof, from family members has a major influence on choices such as this. Many feel pressured to finish their academics, as their parents want them to have something to fall back on, while others urge them to follow what makes them the happiest. Felix’s father was luckily among the latter.

“There was a point where one of my first singles “Are You With Me” came out. I was still studying in school at that point, and my father said ‘Why are you still studying? Why don’t you try to take a shot and see what happens?’ So yeah it was really my dad telling me to take a shot and see what happens because the scene was pretty huge in Belgium so I thought why not? That was about two years ago and I’m still here so it’s been a cool journey.”

Of course major lifestyle changes like this don’t come without their share of obstacles along the way. For Felix, as well as many other artists, the fear of not living up to the success of a previous project is a major hurdle to overcome.

“I was really scared to be a one hit wonder. It happens a lot in music. You have a lot of people coming up with one single and then you don’t hear from them again. I was really scared about that, but when my next single “Reality” came out it was a success so I started to let myself enjoy it and grow as an artist. Now I have an album coming out and it’s really exciting.”

As we start out in our respective career paths, we want so badly to be successful that we grab onto and take part of as many things as we can to stay afloat. What’s even more unnerving is that we often do so blindly. In situations like this, Felix’s best advice is to slow down and take your time with big decisions.

“Sometimes at the start when you get out there you rush into things with people that contact you and you just trust them. But sometimes you need to take your time and be sure of what you’re doing.”

If we take our time to grow as artists and make decisions that we feel will ultimately be the best for us, the rest will essentially figure itself out in its own way. In Felix’s case, he saw growth not only in his own journey, but the lives of others around him as well. A strong support system through family and friends will always be part of the bedrock of success, regardless of how long they have been in your life in a positive way.

“It’s really important to have good friends around you that support you. It really helps a lot. The funny thing is that now I get a lot of messages from my friends and even the guys who used to make fun of me saying that my music is really cool. After some time, people can grow up and realize that how they acted when they were younger wasn’t smart. I have learned to forgive them. We have all gotten past that. I see those guys now and we all chill together. It’s fun to see how people can change in five or six years.”

There are few examples quite as special when it comes to seeing music bring people together. Stories like Felix’s truly show how there is far more behind the music than what we hear captured in a song. He would like to see more artists revealing those backstories as well.

“With social media you can do so many things and share so much with people, but sometimes there are hidden stories behind music that you don’t know. Sometimes it’s cool to know how things were really created. In the electronic music world sometimes you don’t even know if the people make the music themselves. That’s something I would like to change. People who are really working on their own productions should be receiving the credit.”

With that, Felix would like to express just how thankful he is for all of the love and support he has received from fans along the way. Their support throughout the last two years has meant more to him than he could possibly convey.