A concerning report has come in from the Drugs Information and Monitoring System about the circulation of a new ecstasy pill in Europe. The pill is identical to the Superman Pill and is being passed off as MDMA. However, the pill is in fact PMMA, a drug with similar effects as ecstasy, but with a delayed onset. With ADE in full swing, The Trimbos Institute has issued a warning about the imposter pill.

“The difference between MDMA and PMMA is that the effects of PMMA occur much later, by which time the user may have an illusion of a low dose of MDMA. Hours after a dose of PMMA is ingested, severe physical effects such as increased heart rate and extremely elevated body temperature may suddenly occur.”

This means users may think they have taken a lower dose of MDMA and take more, increasing their risks of fatality. The main risk factors associated with PMMA are overheating, heart, liver, and kidney failure.

According to Mixmag, “last year, UK police seized 400 pills similar to the one described by Trimbos after they were linked to four deaths in Suffolk and Shropshire.”

Check out the flyer posted by Trimbos below and stay safe out there: 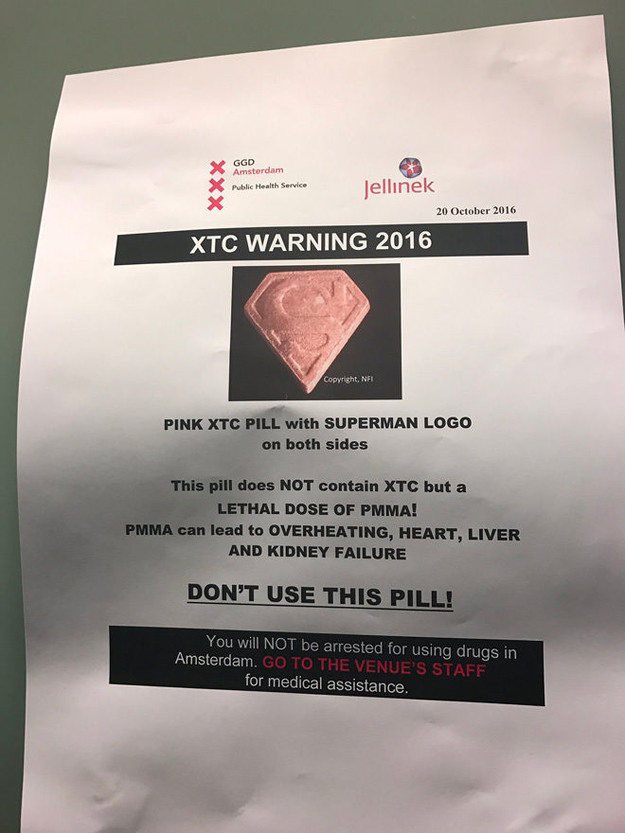