Festival Booking Agent Freaks Out On Deadmau5 Over His Political Commentary

In a small bout of political commentary yesterday, deadmau5 posted an image of the states that had voted for Hillary Clinton in the general presidential election and noted, “on a lighter note… just released my tour dates.” 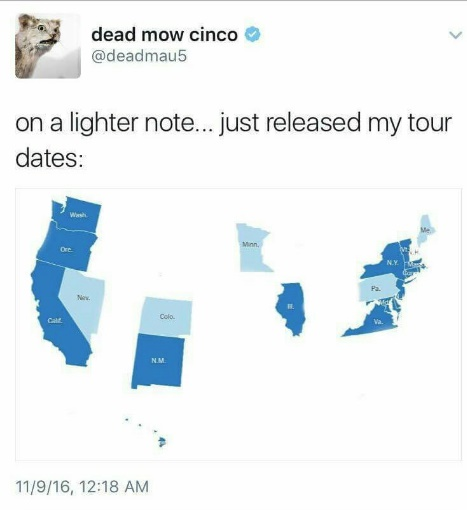 In our own coverage of the tweet, it was necessary to specify that it was satirical and political in nature, not an actual announcement of his tour dates. It seems that Decadence AZ wasn’t convinced however, since they immediately called Joel’s booking agent to yell at him about it.

decadence just called my boooking agent flipping ahit about me posting a map with blue shit on it.

An official announcement of tour dates for the album will likely come from mau5trap or deadmau5 with a slightly more legitimate design and appearance than the map shown above. His new album comes out December 2.

OIJ – Back To The Start ft. Gia Koka