Even though it’s winter has only just begun, summertime festivals have already begun to release details and hints about their lineups and tickets. This week, annual Tennessee event Bonnaroo released the first in a series of lineup-related clues ahead of its June dates.

In an image topped with the #RooClues hashtag, the festival posted a short line of dialogue meant to give fans a hint about who it might be referring to. After some quick detective work, fans discovered that the clue pointed towards Getter, judging by his iconic catchphrase “suh dude?” and his recent What The Frick EP with the monster truck image as its cover. 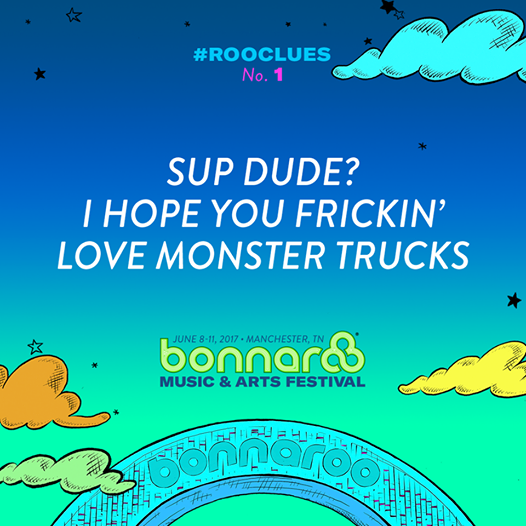 As his fan base waits for his June stop at Bonnaroo, however, Getter and his accomplice Nick Colletti have proved themselves to be busy working on something a little less conventional than a festival set. Today, they teamed up with popular Youtube Filthy Frank under his “Pink Guy” alter ego to create a hard-hitting rap music video called “Hood Rich.”

Each of the three of them dress in colorful full-body suits and ride around in an Audi with an enormous bag of weed during the video, with Getter making sure to include some video time pointed at his crotch.

Watch the music video below, and snag your tickets to Bonnaroo’s 2017 installment here.