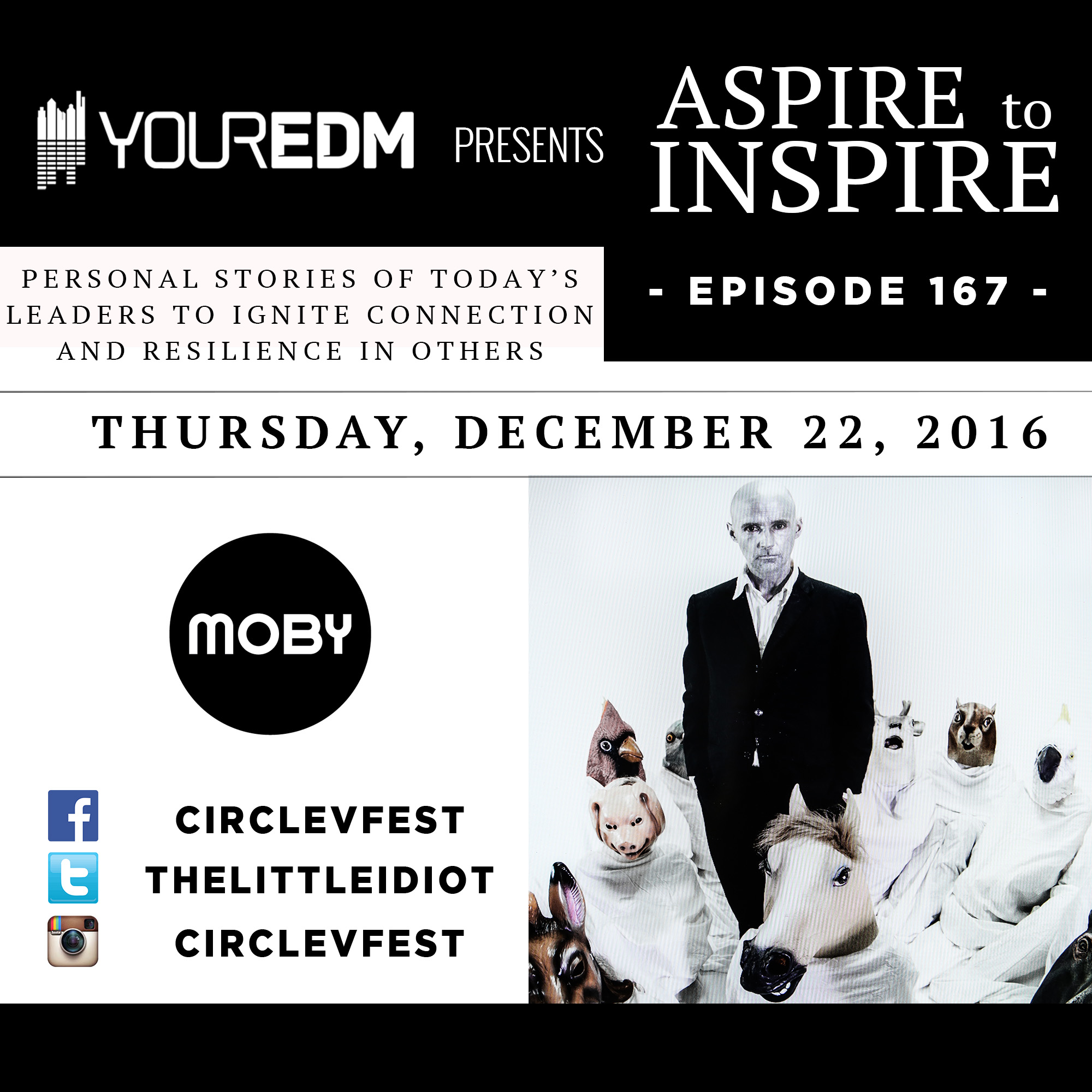 If you were to be an artist in the world, in varying stages of fame, even the most drastically different would have one common thread— they all started somewhere. As we see our favorite DJs and producers thrive in the limelight, we sometimes forget that there was a time when they were just starting out…a time when they had their own heroes motivating them to work harder…a time when they were a little more like us.

Moby has seen the music industry go through a number of changes and trends throughout his career, but as big names and sounds came and went his love of music never faltered, making him one of the most genuinely beloved artists around.

Born in 1965, Moby spent his early years with his family in a basement apartment in Harlem, New York. When his father passed only two years into Moby’s life, his mother relocated the family to her hometown in Connecticut before he eventually made his way back to The Empire City for the majority of his life and career.

Regardless of the location of his family, music remained a constant. With countless musicians that expanded beyond his immediate family, there was always something new to hear and appreciate.

“Almost everyone in my family plays an instrument of some sort. My mom was a pianist, my great grandmother taught classical composition, and my uncle plays guitar and flute. So I grew up in a very odd, eclectic, musical household. Everyone in my family always had really weird records. My mom dated lots of musicians too so I just really grew up around music and from a very early age I just accepted that nothing affected me as powerfully as music did. I loved books, I loved art, and I loved movies, but on an emotional level nothing else had quite the same impact as music.”

Moby started making his own music fairly quickly at the age of 13, but did not release anything until his high school punk rock band The Vatican Commandos put out their first single, which sold 200 copies. From that moment on he never looked back.

Thankfully, Moby’s family was a major source of support. It is all too often that families are hesitant to support their children in their pursuit of such a risky journey. Their hesitations are almost always out of concern for a successful and stable future, but can put a major strain on their relationships.

“Everyone in my family is a broke artist so they were all very happy to see me pursue a life in music. I think they would have been disappointed if I had gone on to be a doctor or a lawyer. I assumed, when I was growing up, that I would make music in obscurity and no one would ever listen to it. I thought I would teach community college and just work on music in my spare time for an audience of no one.”

Little did he realize, it would grow to an audience of millions.

For a long time, the success of Moby’s music didn’t feel real. For a lot of artists, thinkers, and creative minds, seeing your projects received in such high esteem can feel surreal, out of body, or even awkward sometimes. Self-doubt was one of the more prominent states of mind Moby found himself in as his music began to boom, but his ability to find a way to harness it became instrumental in his highly decorated career. By finding sobriety, shifting life situations into better context, and attending therapy, Moby was able to navigate his inner turmoil and channel it the right way—as motivation.

“Self-doubt has always been there. All of my bad decisions have come from a place of self-doubt and feelings of inadequacy. To an extent, it can sometimes be a helpful tool. In a very weird way, it’s like fire. It can help you cook your food, it can help keep you warm, but it can also burn your house down. Self-doubt can be a very powerful motivator, but it can also destroy you and inhibit you. I remember when my album “Play” started doing well, it was only after it sold a few million copies that I realized people weren’t just pretending to like it.”

Among some of his favorite career-memories, signing his very first deal is one that he cherishes most.

“I suppose one of the most remarkable moments was when I signed my first record deal. I never thought that I would have a record contract, and in 1989 I was signed to a tiny little dance label in New York called Instinct Records. I thought this was so exciting, even though when I signed the deal, they didn’t have an office, any employees, and they had never actually released any records before. I was still so excited to actually be signing a record contract.”

As for Moby’s views on the current state of music, there is a lot to be said. From changes in the music industry’s accessibility, production quality, to continuing to push boundaries, it seems to him that music is in a great historical moment. With so many advancements, music is on the cusp of something we have never seen before. That is, of course, if we are willing to resist complacency.

“On one hand I think the current state of music is remarkable because it’s so democratic and so egalitarian. There are no more boundaries to the world of making music. Any kid with a phone can now make music and you don’t have to speak English to have success. In terms of music production, it’s a remarkable time.

The other is with the software platforms. It’s really easy to make average music. So on a grading scale there is a lot of music out there that is a solid B. I feel like it’s super rare now when producers push themselves to reach A. Often times people become complacent – a producer makes something and it sounds okay and it might get played in the nightclubs somewhere so they release it without really pushing themselves, to make something remarkable. So the thing that concerns me the most is how comfortable people have become with good and how rare it is to encounter something that is actually excellent.

I hear so much music that is very good, but not transcendent.”

At this point in life, Moby continues to make music only because it is his first love. These days he has shifted this focus to animal and political activism. His hopes for the future include doing what he loves, staying of healthy mind and body, as well as continuing to understand the world around him better—all while being as effective as possible.

When asked if there was anything he would possibly want to change if he could, he left us with these wise words.

Every person that has walked this Earth has dealt with adversity in one form or another. Some addiction, some depression, others face it from outside forces. How we choose to handle and hopefully overcome such obstacles can potentially steer us on the paths of greatness or defeat. All you have to do is ask yourself— are you willing to do what it takes?