Insomniac has just unveiled the exceptional lineup of artists set to perform at the reimagined Beyond Wonderland 2017, and it’s promising to be nothing less than spectacular.

The two-day celebration is being transformed into a fantastical new dimension of Beyond Wonderland, The Endless Sea. The festival is returning to its original home at the NOS Events Center in San Bernardino, and the 7th annual edition of the beloved festival will take place on Friday, March 24 and Saturday, March 25, 2017. Over 70 artists will be performing across six intricately designed stages, including heavyweights Diplo, Hardwell, Yellow Claw, Alison Wonderland, and NGHTMRE, to name a few.

The industry-leading soundtrack to Beyond Wonderland will feature an extensive collection of genres including house, techno, dubstep, trap and bass. Making their Insomniac festival debut, Cheat Codes, Dombresky, Jax Jones and Borgeous will bring Headliners new sounds and unforgettable sets while the Insomniac Records team will showcase a handful of their incredible up and coming artists including Bot, Gladiator, JSTJR, Redlight, Rell The Soundbender and Sinden.

Additionally, Insomniac has thrown together an exclusive playlist to showcase the talent awaiting at Beyond Wonderland 2017. 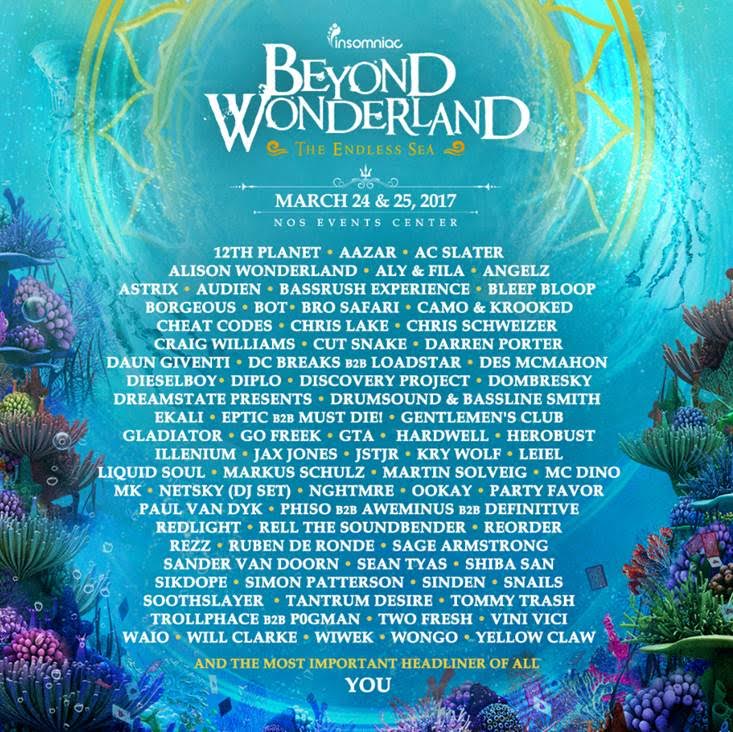