Lineup for the 3rd Annual Dirtybird Campout Is Out Now

Picture the good ol’ days, when sun-drenched hours flew by filled with outdoor adventures, and life was no more complicated than trying to win a game of dodgeball or to sneak off with a new friend after dark. Yep, summer camp was pretty epic, but if only there had been music…

This October, Dirtybird Campout returns for its third installment with a new and improved home in Central California. It’s a singular experience delivering three days of nostalgia-inducing activities, soundtracked by some of the world’s most cutting-edge DJs and live acts, all curated by Head Counselor and Dirtybird boss Claude VonStroke.

Today, VonStroke reveals the line-up of “Counselors” who will be joining him in October at Campout, Campout’s newly crafted second stage has allowed VonStroke to fashion the festival’s largest lineup yet, featuring the very best in contemporary house and techno, hip-hop and off-kilter beatmakers, alongside all the fan faves from the Dirtybird label family.

Joining the flock in 2017 will be Motor City techno icon Matthew Dear, the envelope pushing electronica of Danny Daze, Eats Everything’s Campout debut after his romping return to the Dirtybird label this year, and massive influencers of the Dirtybird sound DJ Deeon & DJ Funk. Special showcases will be provided by the influential Soulection crew, the Desert Heart’s party-starting brother duo Mikey Lion and Porkchop, plus a FK A Genre takeover by Mija. Unique live and emotive dance floor fun will be provided by dOP & Tennyson, plus a standout set from iconic electro hip-hop star Egyptian Lover. Drum n Bass will be repped by the Brazilian master, Dj Marky while Manchester’s Madam X will bring her sought after grime styling and BBC star Benji B will provide his extensive knowledge of excellent tunes. Geniously dark sounds will resonate from EPROM & Alix Perez as Shades, alongside Bleep Bloop’s insane beats and Barclay Crenshaw’s “futuristic 90’s” vibe. Trap-smith araabMUZIK will mesmerize with his live edits of some of the genre’s biggest tracks, while jackin House & Techno drives through the weekend from Jesse Rose, Gene Farris, Lauren Lane, Britta Arnold, Denney, Sonny Fodera, Cut Snake and Mike Servito and many more.

Add to this the core of the Dirtybird family, including Justin Martin, Christian Martin, Worthy, Shiba San, J.Phlip, Walker & Royce, Kill Frenzy, Will Clarke, Ardalan, Weiss and Sacha Robotti, and you have one hell of a Campout.

The only thing that could make this lineup even better is one very lucky Dirtybird super-fan DJ. By submitting a mix to the Dirtybird Campout DJ Competition, you could win a chance to open The Birdhouse Stage, meet Claude during the festival and receive two Backstage Party Passes, plus hear your mix air on an episode of VonStroke’s weekly BIRDHOUSE radio show! More details here: www.dirtybirdcampout.com/djcomp

Tempting as it may be to stay on the dance floor all weekend, however, it’s Campout’s other activities that help make it so unique. Swing by the Games Headquarters where fellow campers, artists, and your favorite Dirtybird Counselors will be picking sides for a range of down and dirty old-school favorites. Campers may find themselves shooting a bullseye at archery, munching on S’mores and swapping stories around the campfire, or stepping into the limelight with the Campout Talent show, Camper Comedy, Beat Boxing Competition and late night Karaoke. So grab that official color team bandana and jump in with some camp spirit – that Iron Bird Championship won’t win itself!

Claude scouted high and low for 2017’s new location, when he finally found sanctuary in the expansive hills of the San Antonio Campgrounds he knew instantly this land would be rightfully deemed “campout territory.” Located in Bradley, CA, Dirtybird Campout will be positioned right in the middle of San Francisco and Los Angeles making it easier for our northern campers to trek down. 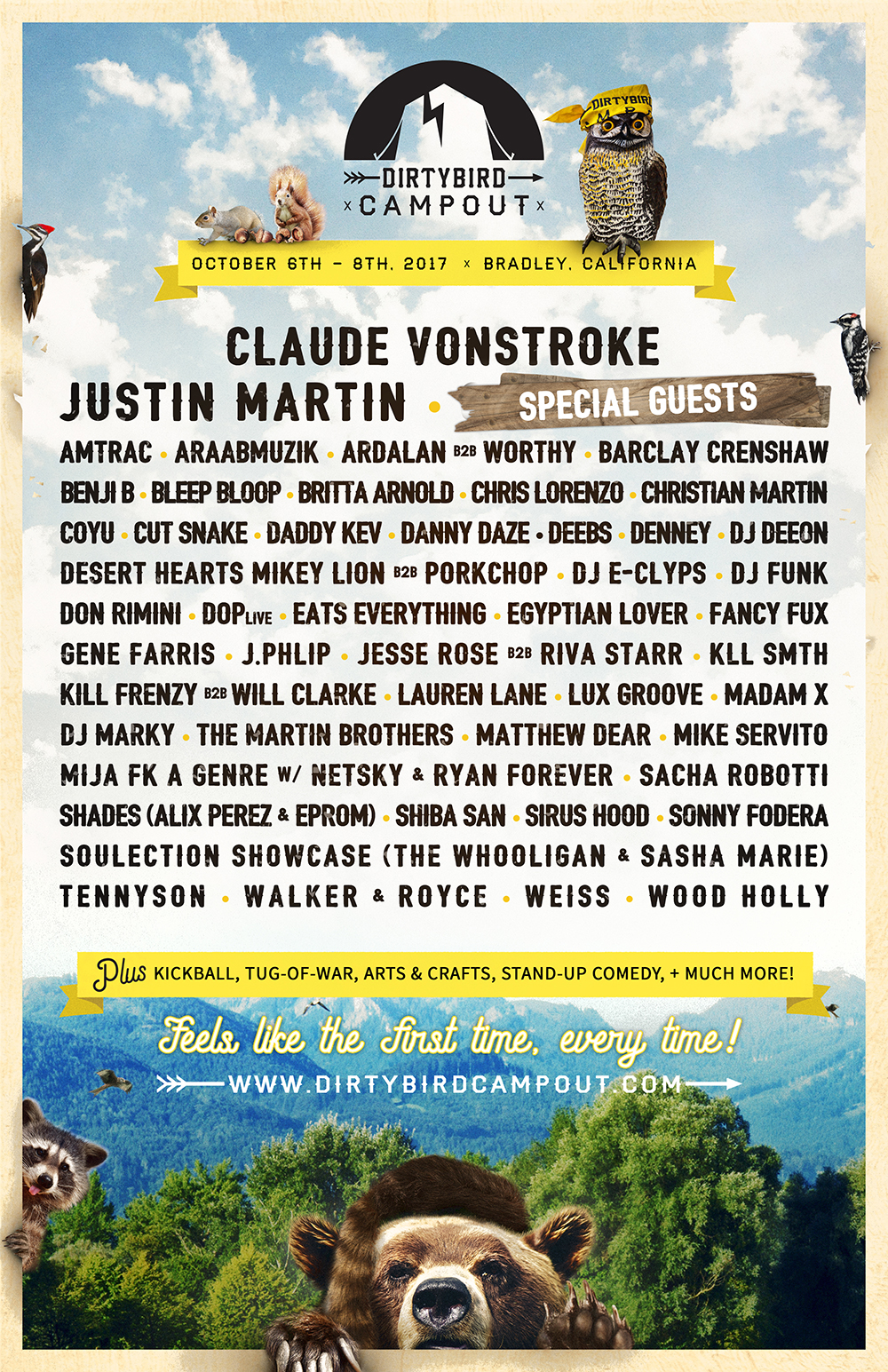 Your EDM Interview: Meet Hex, the Producer Behind DnB Dojo

Your EDM Interview: Meet Hex, the Producer Behind DnB Dojo