by Jeffrey Yau
in EDM News

Ironically, pharmaceutical titan Martin Shkreli who has since been convicted of two charges of securities fraud and an attempt to commit another might have suffered from one of the most embarrassing frauds in a while. Shkreli purchased the only copy of the last Wu-Tang album Once Upon A Time In Shaolin for $2 million, the most expensive record ever sold, but according to the Wu-Tang Clan themselves Once Upon A Time In Shaolin wasn’t even a Wu-Tang Clan album.

Instead, it was an album by the Wu-Tang Clan’s network, known as the Wu-Tang Killa Beez, but not a project of the original members. In fact, managers of U-God and Method Man, both members of the 8 original Wu-Tang Clan, have since come out to say that the album that both their clients recorded on was for a project by Cilvaringz in a statement to Forbes. Method Man’s manager confirmed that Method Man’s verses were done for a Cilvaringz project adding that “how it became a Wu-Tang clan album from there? We have no knowledge of that.”

Cilvaringz is a Moroccan producer affiliated the clan who supposedly led the project as that of his own along with Wu-Tang founder RZA. When questioned about the album, he was equally vague stating that “the album and its concept were an evolutionary process that spanned six years, too complex to explain in a soundbite…all participating Wu-Tang artists were paid in advance while RZA and I bore the financial risk of the project.”

Apparently, the entire process was borne out of Cilvaringz owning several years worth of recordings from the actual members of Wu-Tang for various projects before combining them all into one “album.” None of the Wu-Tang members realized they were recording for a  supposed Wu-Tang album. U-God’s manager Domingo Neris echoed that sentiment saying that “we would never have authorized anyone to put together a project and call it a Wu-Tang Clan record without us ever looking at it, hearing it, or being in the same room together. That’s just the way these guys work.”

Rapper Shyhelm Franklin who also appeared on the album’s credits confirms that theory telling Forbes that Cilvaringz had told him that the recordings were to be used for a big Cilvaringz project with a lot of various people on it, but not a Wu-Tang album. Same goes for rapper Rapper Killa Sin another Wu-Tang affiliate, who had a few verses appear on the album but was also told by Cilvaringz that the verses would be for his own project.

Killa Sin has since expressed his regret at the way the album, and its eventual sale to Shrekli played out. His verses would never be heard by any of the Wu-Tang’s fans while he also reserved some criticism for the way Cilvaringz handled the affair. “It’s like f— everybody else. I’m going to get mine. He probably thought, ‘We’re onto something. We can really get some money for this.’ But you got to stop and say, ‘How would my brothers feel?'”

The album was listed for bid at eBay by Shrkeli, but the listing has since expired after a winning $1,025,100 bid. 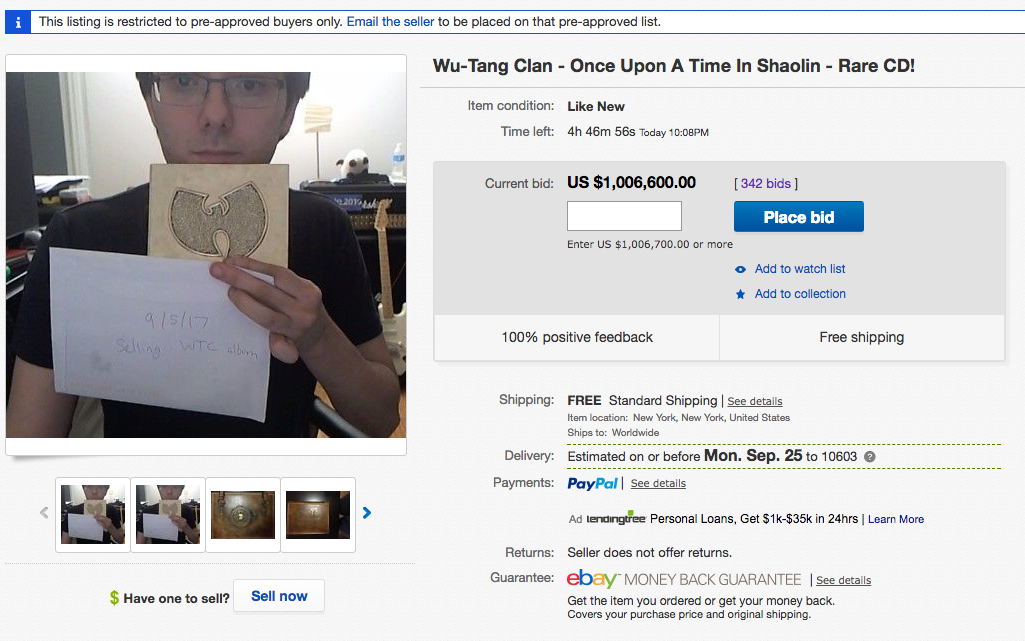