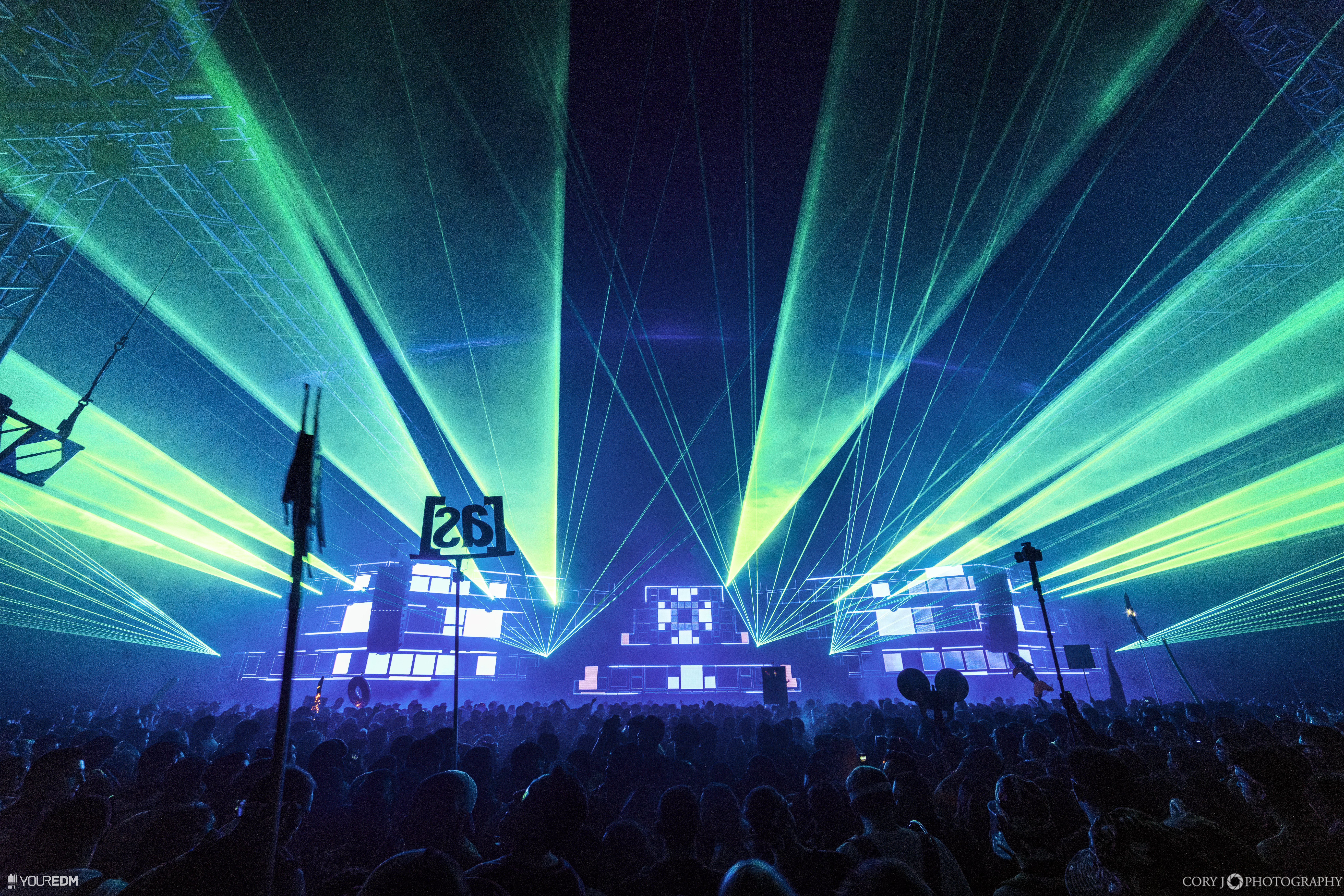 Insomniac Rings In 2018 with Epic Edition of Countdown

More than 78,000 headliners rang in the New Year at the 4th annual edition of Countdown. Held at the friendly confines of the NOS Events Center in San Bernardino, California, over New Year’s weekend, Countdown is the largest New Year’s Eve celebration on the West Coast. Headliners were treated to gloriously mild Southern California weather over the weekend and three massive stages of dance music. Insomniac seriously stepped up the production design of the Resolution stage (main stage) this year. Rows of light panels were stacked on each other creating a trapezoid of vivid lights and colors. Lasers were plentiful, confetti even more so, and the colors were sharp. The support pillars were also adorned with triangular LED structures that added a nice touch to the stage.

Unlike other Insomniac festivals where there is no headliner and the lineup drops at once, each night had a dedicated headliner announced prior to the rest of the festival lineup. Saturday night it was Porter Robinson, who is off to a blistering start to 2018 with his Virtual Self project. Sunday night it was deadmau5. This was significant as deadmau5 had not performed at Insomniac festival for over seven years, and he has had open Twitter beef with Insomniac head honcho Pasquale Rotella over the years. It appears that has been patched up for now, and Countdown’s headliners were the lucky recipients.

Porter and deadmau5 weren’t the only highlights, though. Saturday was more varied in the genres being showcased. We caught the end of Dombresky’s set at Resolution stage and immersed ourselves in the crowd for Mercer. The Pardon My French crew member started off with some pounding progressive to get the crowd started before diving into more deep and house-y sounds. We then decided to poke our head into the Continuum stage which was hosted by Bassrush for the weekend. At 8:30, this stage was absolutely packed to the gills for Etc!Etc! b2b JSTJR. The light columns mounted at the ceiling of the tent evoked Imperial star cruisers from Star Wars.

From there I headed over to the Infinity stage to check out some of Shiba San. It was his usual blend of Dirtybird style house and tech-house. The Infinity stage was essentially just a smaller version of the Resolution stage, it did have a central LED screen right behind the DJ booth, which was a nice touch. From there it was back over to Resolution stage for Alison Wonderland. She dropped a nice set of future bass, going between more uplifting and more filthy styles throughout her set. Next up was Galantis, and they blew the audience away. Opening with their live drum intro, the Swedish duo seamlessly weaved in and out of big room and progressive bangers along with their own catalog of hits, “No Money,” “Tell Me You Love Me,” “Love on Me,” and of course “Runaway (U&I)” to close it out with a massive confetti flourish. It was something special.

Porter Robinson came on the close out the night with amazing production flourishes and, of course, his trademark anime visuals. I wasn’t sure what to expect from Porter’s DJ set – would he play future bass, dubstep, more of the electro house style that originally got him noticed? He started out with a lot of progressive and several of his Worlds hits, but ended up segueing into…happy hardcore. Yeah, lots of happy hardcore from Porter. It was a great DJ set; obviously it can’t match his Worlds live show, but this was a good window into where Porter might be taking his music in 2018.

Original Photo by Cory J Photography for Your EDM

Day two brought even more revelers into the festival grounds. Anyone who attended last year remembers that day two was marked by a torrential downpour of rain, but the fair weather clearly brought out a bigger crowd this year. The Resolution stage was ground zero on Sunday as the other two stages were a bit lackluster in their counter-programming for most of the day. We arrived during GTA’s set, and the boys from Miami absolutely set the tone for the night playing a bouncy set and also dropping a new ID that bangs! JOYRYDE also delivered a fire set of his trademark bass house. Diplo took over the main stage next and he played a great set of current hip-hop hits, Diplo originals, and pounding bass.

After that, it was time for the moment everyone was there for, the mau5 ringing in the New Year. Joel played an enthralling set accompanied by his iconic Cube stage setup. The low-end was heavy as deadmau5 opened with two tracks off W:/2016ALBUM/ – “Three Pound Chicken Wing” and “Imaginary Friends.” Joel would go further back into his extensive catalog for “My Pet Coelacanth,” “Maths,” and the song that started it all so many years ago, “Ghosts N Stuff.” As the clock approached midnight, who should appear on the Cube but Rick and Morty? Joel, a huge fan of the Cartoon Network series, teamed up with voice actor Justin Roiland for a custom Rick and Morty countdown. A truly on-point moment, Rick Sanchez wished all the shitheads a happy new year, and acknowledged the shithead in the mouse helmet. Perfection.

Joel closed his set out with “Strobe” and I saw that it was a very cathartic moment for a lot of people. People seemed as if they had been relieved of a great burden, as though a weight was lifted off their shoulders. And then it hit me, why? Because the time on the clock changed, because the date on the calendar changed? I guess, for me I realized that if you’re happy with what you’re doing in life, don’t change a thing, keep doing what you’ve been doing in 2018, 2019, and beyond. In the spirit of that, I headed over to the Infinity stage for W&W, one of my favorite acts. I made my way to the middle of the GA crowd and raged my heart out as Wardt and Willem played an incredible set of new W&W IDs, classics like “Put ‘Em Up,” “Rave After Rave,” “Live the Night” and “Chakra” as well as a few old rave standards too. I guess that was my cathartic moment of the weekend.

Countdown was a resounding success and all it did was make me more eager for the next Insomniac festival in 2018. No matter what your resolution was this New Year’s, 2018 should be a very exciting year for dance music and on the festival circuit. Insomniac will return to San Bernardino in March for Beyond Wonderland. If you’re like me, festival season can’t come soon enough this year.