Awakenings Reveals a Massive Lineup for Their 2018 Festival

by Georgia Modi
in About, Editorial, Events, Lineup, Previews

Amsterdam’s seems to not know how to hold back when it comes to playing host to top-notch music events with the most recent announcement to come from that side of the pond. This past week Awakenings announced the full lineup for their 2-day festival, happening at the end of June, and it is nothing short of enticing.

Awakenings Festival has become one of the biggest and most well-known outdoor techno festival in Europe – nearly 80,000 attendee’s flock to the Netherlands to be able to revel in the music of some of the leading artists of the genre.

Boasting popular names such as Carl Cox, Adam Beyer, Chris Liebing, Dubfire, Maceo Plex, and Nina Kraviz Awakenings knows how to cater to many tastes. While those artists can hold a lot of weight for many attendee’s who would be satisfied with just seeing them it is important to highlight those who may not be as in the spotlight or well known by mainstream goers. Artists such as SNTS, AnD, I Hate Models, Rebekah, Paula Temple, Peggy Gou, Sterac, and Attention Deficit Disorder (AnD & Dasha Rush live) are acts that tend to tread more towards the underground but, to me and many others, are some of the best in the game as of right now. They all would definitely be “can’t miss” acts for myself. You can take a look at the full lineup below and decide for yourself who would be on your list of who to catch.

Tickets and hotel packages are on sale now, you can purchase them on the Awakenings website here. 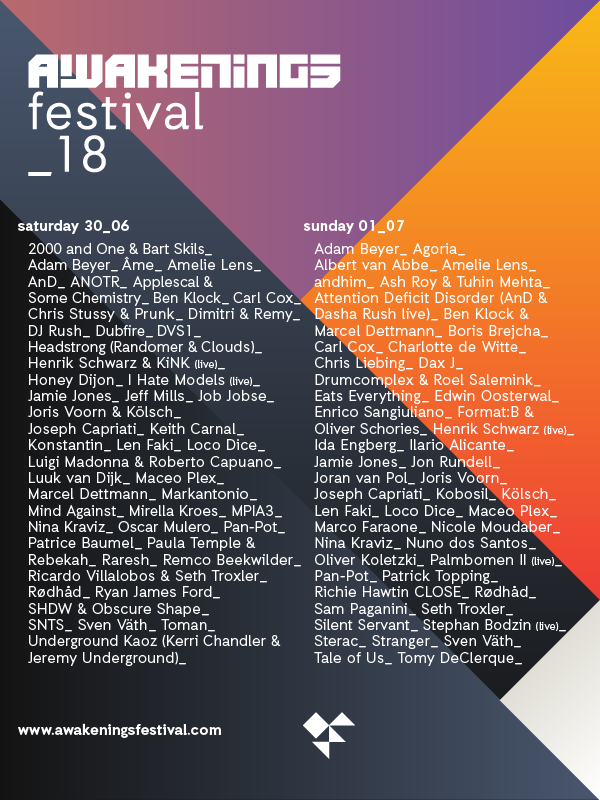 Madeon Clears The Air After K?D Takes Down Track Over Copycat Accusations

Above & Beyond Release New Song, “Always”

Above & Beyond Release New Song, "Always"