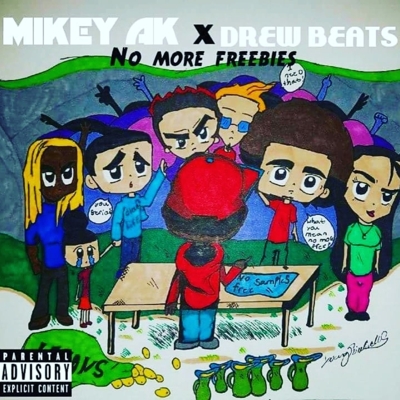 Maryland rapper Mikey AK has released a stunning 12 mixtapes since entering the music game in 2009, and if the title of his latest album is anything to go on, AK may have been working for free on a number of them. No More Freebies, released earlier this month, seems to be a declaration for AK of “no more Mr. Nice Guy,” and he has a point.

Especially in today’s climate and especially in the electronic-based genres like EDM and trap rap, it is far too easy to produce art and bodies of work for free or for “exposure.” While all artists have to put in their work and time before being successful, at a certain level if an artist isn’t getting paid it’s a cheapening of the art and an exploitation of the artist. While No More Freebies has a number of other themes, it would seem this is central to Mikey AK throughout the entire album.

While No More Freebies is musically trap-based, audiences will find no mumble rap from Mikey AK. The album is, in fact, an interesting marriage of modern musical styles and AK’s more classic, 90s-era lyrical styles. Even in the first single off the album, “Loose Change,” which is nothing if not trap and stoner rap, AK’s enunciation is clear and his verses are complex and well-syncopated. This is no easy feat with a trap beat.

AK is serious about the No More Freebies theme, as his last album was called, appropriately, One More Freebie. That mixtape had tracks with names like “Exposure,” “Movn and Shakin” and “Celebrity Caller,” and while it can be found on AK’s Soundcloud, No More Freebies is conspicuously absent and will likely stay as such. It’s a good message for modern musical artists and a declaration against devaluing music. Tracks like “Loose Change,” “Up a Check” and “Respect Me” on this mixtape are a further statement that Mikey AK will not be working for exposure anymore, and here’s hoping he inspires more artists to do the same.

Mikey AK’s new No More Freebies album is relevant to EDM not just because of its electro-inspired trap beats but also because of the current musical climate today. In a genre which is saturated by artists working on their own Soundcloud pages just trying to get exposure, Mikey AK will hopefully help some of these artists put aside the fear of never becoming famous and inspire them to stand up and declare their work’s worth. Mikey AK has done it, so here’s hoping more great artists follow suit.

No More Freebies is out now and available as a playlist to Spotify members and for purchase on iTunes and GooglePlay via Mikey AK’s website. His previous mixtapes are still available on his Soundcloud. We wish him good luck in getting paid.