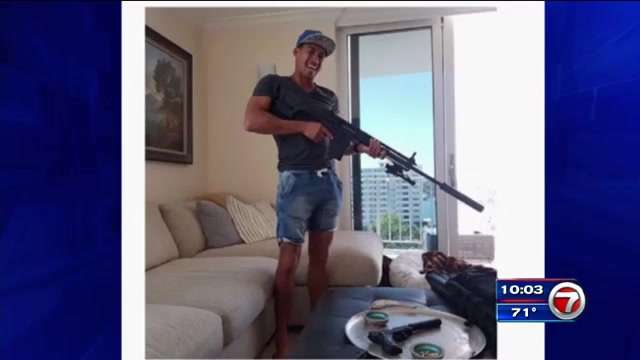 Authorities and police were on high alert this past week during Miami Music Week and Ultra Music Festival, keeping an eye on both local foot traffic as well as social media, in order to spot any threats. One social media post that caught their attention was made by Rayne Russell, a tourist in town from Jamaica.

Russell posted a photo on Instagram a high-powered rifle; on the table next to him was a handgun with a silencer clearly visible.

The picture was captioned “Ready for the weekend” and included the hashtags “#tgif,” “#ultramusicfestival” and “#mmw2018.” Russell has since turned his Instagram account to private.

Ray Martinez, the head of security for Ultra, had a team monitoring social media and was aware of the photo. Police tracked the man down on Sunday and immediately questioned him, after which they determined there was no imminent threat.

Nonetheless, the photo was considered in exceptionally poor taste and timing.

“It’s like madness, you know?” said reveler Kamelia Kargar. “It’s scary, and it’s freaking me out.”

“I’m very worried because, when there’s a big crowd, you don’t know what kind of person might do something crazy,” said Ultra goer Abdiel Garcia.

“I don’t know what his intentions were, but I hope that they weren’t bad,” said Eric Mack.

According to 7News, Russell was taken into custody hours after he attended the festival on Sunday.