It’s pretty clear both from his name and from his production style that Balatron doesn’t take himself too seriously. The name, loosely translated, means “one who talks a lot of nonsense” or more simply, “buffoon.” Similarly there is always a real sense of fun to Balatron’s tracks, and he definitely doesn’t get stuck on one particular style or genre.

This is very much the case on his most recent single release with MethLab. It includes two tracks from the Icalander: “Shock” and “Straight Thuggin.” While firmly in the wheelhouse of halftime, both tracks have a sort of light, fun feel while also including heavy, almost darkstep-like bass and sub bass. “Straight Thuggin” has a lot of funky and tribal syncopation, sort of like early Ivy Lab but more rooted in DnB than hip hop. “Shock” has an intro beat that almost sounds like chill R&B if it was put through a blender before more counter-beat syncopation is added in after the first break. These tracks are built like halftime, but they follow very few structural or sound design rules after that.

With momentum building for Balatron, he’s poised to be one of the producers who keep halftime going as a subgenre, and this will likely carry to the U.S. with his upcoming LP, also due out on MethLab. With all that in mind, Your EDM decided to ask the halftime hero a few questions about his style, why he enjoys halftime and how he sees his place in it. For “one who talks a lot of nonsense,” he gave some solid, straightforward answers.

How did you hook up with MethLab on this release?

Well Ihave been a fan of the label for some tI’me. Quality releases and great overall. Amazing artists and art team. They hit me up and asked if Iwas interested in doing a release with MethLab. Ijumped at the chance.

How did you decide these two tracks would work well with MethLab?

To me MethLab have always had an element of exploration so Iwanted to give them something they haven’t done before. Both tracks are hard-hitting but Ialways try to make my music very bouncy and groovy. Ifelt that “Straight Thuggin” and “Shock” would be a great start.

Speaking of the tracks, they not only seem different from other stuff you’ve done but they’re quite different from each other as well. Did you make them around the same time?

They are a couple of months apart. I’am always trying out different things when I’m writing. I tend to get bored if it sounds similar to something else. Same thing listening to other peoples music, I’m always looking for stuff I haven’t heard before but it’s hard these days. So many artists sound the same, same drums same samples same groove, most people are scared to find their own sound and stand out taking their time to find their own voice and style. But I try. I probably have tracks that sound similar to previous tracks I have done, but hey I’m human (laughs)

How do you like to work so that you’re coming up with different stuff and it doesn’t get stale for you?

It’s a lot of trial and error really. Endless sessions making stuff that goes nowhere. But then you get to a point writing where it all comes together, and you just go with it and see where you end up.

So did “Shock” or “Straight Thuggin” come together in that way?

“Shock” did, yes. I had been working on it for some time but never got to a point where it made jump out of my chair, but it finally happened in the end. “Straight Thuggin” I finished in like 2 days. I wrote that on a new laptop with just stock plugins. Sometimes taking all your toys away can be very refreshing.  It forces you to create differently. 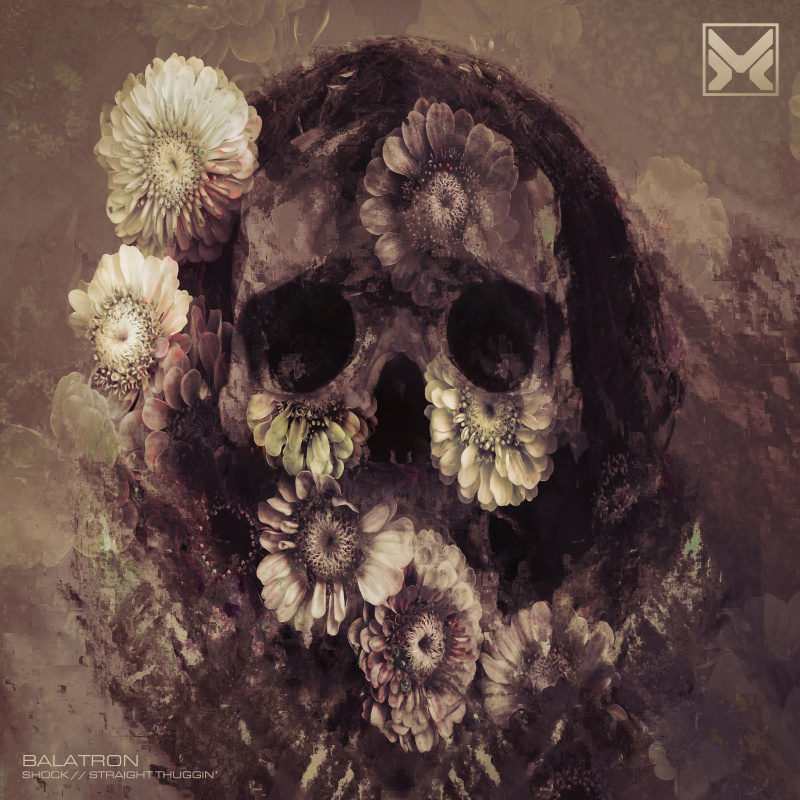 How did you come up with the beat structures and sub bass for these two? They’re quite different from really anything out there right now.

The groove of a track is very important to me. I had the privilege of growing up during the “golden era” of hip hop and music coming from the east coast U.S.A at that time is one of my biggest influences. DJ Premier and Pete Rock made some of the greatest beats of all time. My drums basically come from that. Hard-knocking but funky as hell. But yeah they (the tracks) are very different. “Shock” has a kind of a sluggish flowing rhythm while “Straight Thuggin” is in-your-face knocking and choppy. I think the bass has to compliment the sound and groove of the drums. It’s teamwork. The bass does act as a form of percussion in my tunes, adding that extra bounce.

That’s a good way of describing it. Is that what draws you to halftime in your production generally? The groove and the hip hop influence?

It is yes definitely. I’ve always loved drum and bass and hip hop, so when I heard my first halftime tunes I was blown away. It felt very freeing to me, and still is. It gives me endless possibilities to mix together my various influences. Making hip hop beats but putting ridiculous amounts of bass and sound design in it. Different rhythms, BPMs, melodies. I love it.

Do you get the urge to play around with other beat formats or is it halftime front and center for the foreseeable future?

I go where the music takes me. I never tie myself down to one type of music style. Last year I worked on a pop album for an icelandic artist called Páll Óskar and a rap album for an MC Called KILO. I’ve even worked on a Eurovision song for God’s sake (laughs)! I keep trying new things. Making music for other artists gives me the chance to grow as a producer.

That said, right now I am very focused on the halftime world. It’s blossoming as a genre.

Eurovision? Wow. And a lot of people agree about halftime. We don’t want to see it go down as only a trend.

No not at all. We all remember what happened to dubstep, though it seems to be coming back as well.

It didn’t happen that way in the U.S.! We can’t get rid of it now. Speaking of new stuff, what do you have coming up next in terms of releases and tour dates?

I’m currently working on my first LP. Very pleased about that. It will be released on MethLab and I will keep on working closely with them in the future. I’m also working on a couple of very cool projects .

No touring dates right now, but if anyone is interested MethLab for Europe or Rogue Agency for U.S.

Anything else you want to say to music fans?

Always remember to feed your producer, or cat. Preferably both. To the fans, thank you for the amazing support. I hope to see you at a show soon.

“Shock” and “Straight Thuggin” are out on streaming formats and will release on MethLab’s Bandcamp tomorrow, April 24. Worldwide drop is this Thursday, April 26. Check the MethLab website for purchase links and if you want your MethLab releases early, don’t forget to sign up with their Inner Core. Members now receive previews and opporunity to buy eight weeks before the full release.