Lil Xan and Noah Cyrus began dating 32 days ago. Lil Xan is 21 and Noah Cyrus is 18. They are both massive rising stars in the entertainment world. Today, they broke up because they each thought the other was cheating on them. If you didn’t see this coming, sit down and we’ll get back to you in a second.

While there is a so-called “straw that broke the camel’s back,” this rift in their relationship isn’t entirely new. It all apparently began when Cyrus sent Xan a photoshopped nude meme of Charlie Puth for no apparent reason. Somehow, Xan then assumed this meant Cyrus was cheating on him. In fact, Cyrus had the same idea about Xan, noticing during a Facetime that he had what appeared to be a hickey on his neck. Xan told her it was “just a bruise,” and she gave him the benefit of the doubt and ignored it, but obviously there was still a lingering thought in the back of her mind.

Xan then responded on his own Instagram story that it wasn’t the Puth picture that made him suspicious of Cyrus, it was a picture of her “all over some other dude.”

Remember that straw we mentioned earlier? Here’s the kicker: 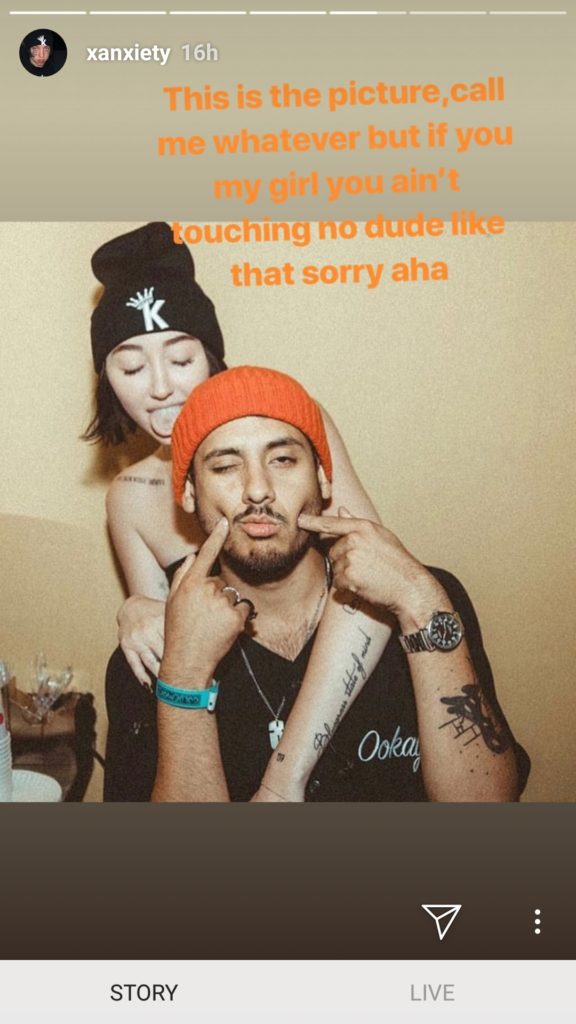 Noah Cyrus appeared as a special guest at Ookay’s show in Los Angeles this past Saturday, singing live for their collaboration together with Marshmello, “Chasing Colors.” This is obviously a situation of two collaborators and friends high on life enjoying their time together, but Xan saw it differently.

(Also, shout out Nate Vogel for capturing this historic moment.)

At time of publishing, Ookay has not commented on his involvement. 😂