by Georgia Modi
in Events, Lineup

Fresh off their successful winter edition this past November, World Club Dome is already at it again. This time; however, is for their June edition, the largest summer club in the world!

“A line-up that makes the national and international club scene shake. A line-up, as colorful and as diverse as you would expect from the BigCityBeats events. EDM, trance, techno and hip-hop. In the largest summer club in the world. In Frankfurt. 2019. In total, more than 150 acts of the world’s top league, each of which stands for uniquen sound in its own way.”

They’re not joking around when they say diverse because so far this lineup has a little bit for everyone with the likes of Sven Väth, Alison Wonderland, Armind Van Buuren, Boris Brejcha, and Marshmello, among some of the names announced so far. For the list of artists that they have revealed so far be sure to check out the flyer below. You can also keep up-to-date with the full lineup on the World Dome Website here. 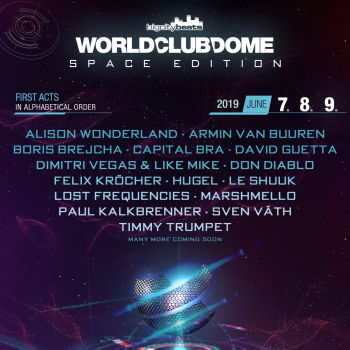