It’s well established that Deadmau5 and Marshmello haven’t had the greatest relationship over the years. The two have been at each other’s throats in the most contentious of ways, generally getting into it on Twitter. However, a new tweet from deadmau5 suggests that the two were able to find some common ground while at Ultra over the weekend and, here’s the kicker… they’re making a track together.

Sources tell us the two were spotted palling around in the artist area, though both of them kept their masks on as a sort of negotiation tool, perhaps to “mask” their real emotions. Though, it clearly went well and we’re excited to hear what comes of these two very polar opposite producers.

Deadmau5 isn’t entirely foreign to the pop world, though his more recent work has definitely leaned a bit more complex. As for Marshmello, while he certainly excels at pop, radio-friendly material, his skill as a producer is real.

More info on this as it becomes available. 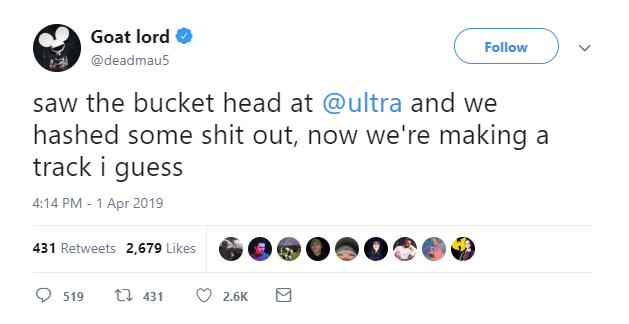 This tweet and this story are obviously made up. There’s no collaboration. Happy April Fool’s!