Two days ago, April 25, CHVRCHES called out Marshmello on social media for putting out a track with known abusers Chris Brown and Tyga, “Light It Up.” In their statement, the band wrote: “We like and respect Mello as a person but working with people who are predators and abusers enables, excuses and ultimately tacitly endorses that behavior. That is not something we can or will stand behind.”

CHVRCHES previously worked with Marshmello on their collaboration “Here With Me.”

Marshmello has not responded to their condemnation, but Brown has. In the comments of one of CHVRCHES’ recent Instagram posts, Brown wrote a volatile and hate-filled message to the group, wishing they “walked in front of a speeding bus full of mental patients.”

“BUNCH OF LOSERS. these are the type of people I wish walked in front of a speeding bus full of mental patients, Keep groveling over your own insecurities and hatred,” he wrote on Instagram. “IM BLACK AND PROUD. AND I KNOW ITS HURTS THAT U GUYS ARE STRUGGLING WIT LIFE OR PEACE SO U ARE FORCED TO SEE MY SUCCESS. You aren’t even #2 (REMEMBER 2nd place only means YOU LOST FIRST! TA-TA. GOODDAY PEASANTS.”

Compared to CHVRCHES thought-out and conscientious message of respect women’s safety, Brown’s comment reflects exactly the person the band accused him of being.

The band has not yet responded to Brown’s statement, but he’s likely done more than enough on his own. See the full comment below. 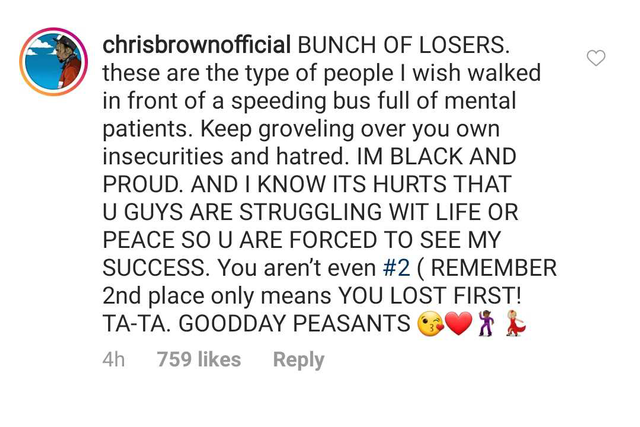 What if Martin Garrix or Marshmello made Fisher’s “Losing It”?

Tiësto Drops Another Sure-Hit Collab On Heels Of ‘Together’ EP

Tiësto Drops Another Sure-Hit Collab On Heels Of 'Together' EP