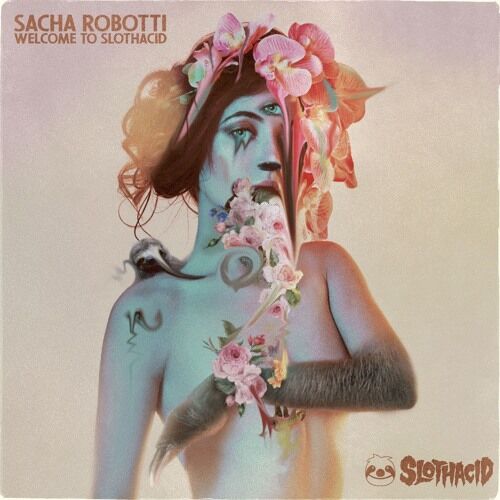 In 2012, Sacha Robotti built a home studio using a Core i7 920 PC with 12GB ram (think about that the next time you have to clear the photos off your iPhone because it’s out of space), Ableton, a Mackie Onyx 1620, Adam P11 monitors purchased second hand from a rock producer in Berlin, a collection of vinyl records for inspiration, and DIY acoustic paneling he built by hand with the help of friends. Simple, yet it got the job done. And now seven years later, Robotti’s sound, brand, and studio have slowly evolved to become: Slothacid Records. I got the chance to speak with Robotti about the launch of his new label and take a look back on how far he has come since our first interview at Nocturnal Wonderland, 2016.

“(The sloth is) my spirit animal because it’s so chill and is moving slow as opposed to the fast-paced life. It’s just smiling” – Sacha Robotti, Nocturnal Wonderland 2016

While Sacha Robotti’s fondness for the world’s slowest mammal has been known for a few years now, its meaning for the DJ has grown far beyond fun answer for a silly question like, “what is your spirit animal?” I hadn’t planned on asking that question if I’m honest, I was nervous and blanked on the actual questions I had planned and that was the first question that popped into my head. So how did Robotti’s “Spirit Animal” become the cornerstone of his “brand” and the mascot for his new record label? In my opinion, it was his fans who embraced it and made it possible. Robotti’s love of sloths and heavy social media presence made the DJ accessible on a personal level to all his fans, not to just the Dirtydbird fans, or the techno fans, or the house fans, etc. It created a fun common ground for Robotti and fans alike. Want to tell Robotti you love a new track but you aren’t sure if it’s a house track or techno and you are embarrassed for not knowing? All you have to do tweet him a meme of a dancing sloth and he’ll probably not only see it but get why you picked that particular sloth. That sloth can convey everything that needs to be said about the song, and you don’t even have to caption it with “tech-yessss.”

“I had my own label in Berlin in 2006 till 2009- a different one, different name etc. We released vinyl and stuff like that. Most people [start their own] labels to have their own creative control. You have your own platform that you can brand yourself. I think my brand, my slothy brand, is quite strong so I think it makes sense to do that step now and do my own label again.”

As a fan of Robotti’s, I think I’m most excited by what the new label could mean for the availability of his music. When I first started researching this article, I made a note that there wasn’t a single Sacha Robotti track available on his Apple Music page. Since the launch, Apple Music has both “Forget Tomorrow” and “Tail of a Siren,” the recently released singles from the imprint’s soon to be released debut EP, Welcome To Slothacid. And much to my delight, Your EDM was given the inside scoop on the 3rd single, “Miles From Home,” a deep, melodic track that’s going down even smoother than a Sunday Funday Mimosa in LA’s scorching heat today. Check it out below!

But in addition to the new tunes, there’s a whole treasure trove of Robotti’s singles, remixes, EPs and even tracks he released with fellow Dirtybird, Kill Frenzy, back in 2012. It’s not the largest catalog on Apple Music, but it’s a huge improvement. My hope as a fan is that by having his own imprint, Sacha will continue to diversify the platforms his music is available on so it doesn’t matter if you have a Verizon phone like me and ended up defaulting to Apple Music, a free Spotify account from your job like Starbucks Baristas, or even if you hate earbuds and think the compression on digital files blows and you only listen to vinyl. Just makes sure you don’t start bombarding his inbox with your demos just yet hoping to get a release on the label. For now, the only music he plans to release is his solo music and collaborations.

I think Robotti could be the just the Mr. Miyagi-like mentor that artists on the rise in the EDM scene need. Before releasing music under his name in 2010, Robotti was also a founding member of an electronic duo named Robosonic back in 2006. And if you look deep in the record stores in Berlin, you just might stumble on some of the vinyl Robotti self-released pre-Robosonic back in 2004. In a business as crazy as the music industry, longevity like that is a talent of its own.

“It’s not going to mean that I’m not releasing anywhere else. It’s going to mean that I ALSO can release on my own imprint. And [it means] I have more creative control, and I can release music whenever I want and whatever [kind of music] I want. Without having to follow a certain market or guidelines from other labels. It’s going to be curated by me, and we will have a tour also this fall that will mainly be me open to close.” !!

Robotti first spoke of me about why he prefers an open to close set in 2016 during an interview for Nocturnal Wonderland. While telling me about his experiences playing in Berlin vs a when he played in the US, he had said the one thing that he didn’t like about the US shows was that last call was so early here in comparison to Berlin that it would often leave him with an hour-long set time.

“Sometimes it takes me half an hour to an hour to warm up, so when I’m playing, I’ve warmed up for half an hour or forty-five minutes, and then I have fifteen minutes left. I’m in a groove and I’m like, ‘Okay, I have to stop now.’ So it’s sad. [Open to close] I get to play a longer set and actually tell a story and not just play bangers, which is great.” – Sacha Robotti, Nocturnal Wonderland 2016

Welcome To Slothacid: An Open To Close Trip