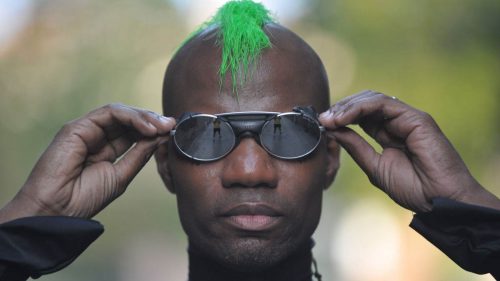 Insomniac recently hosted Chicago’s tech-house preacher of funk, Green Velvet, for a sold-out edition of the “La La Land” day party at Factory 93 in DTLA. This was one of my first times checking out the venue and I haven’t had a chance to see a Green Velvet set since he played the Cannibal Tea Party stage hosted by Factory 93 for Escape, 2017. One thing that I never knew about Insomniac’s “throwback” warehouse venue is they do not release set times for their events, which drove me a little nuts to be honest. I am normally the person who shows up early to check out every set, but this day I happened to be going with a big group of friends not being able to find out who I was missing while trying to herd my friends into various Lyft cars, and it was frustrating. I will say that security was quick and efficient and within 5 minutes of arriving my whole group was in and heading to the bar.

Once we got to our usual meet up spot on the dance floor I pretty much never left that spot again. Both because the music was amazing, but also because it was packed! Front to back, side to side, the dancefloor was just a mass of bodies grooving, fanning themselves, and occasionally trying to turn their fans into an instrument with various success in rhythm. As much as not knowing who was playing before I got to the venue bothered me, as soon as I got on the dancefloor I gave up worrying about the set times. The artists performing throughout the day included La La Land host and creator, Green Velvet, who was supposedly joined behind the decks by longtime friend and vocalist Dajae, Eats Everything, Eskuche, Gorgon City, and Mihalis Safras. I say supposedly because I was too short to ever see who was on stage. At one point one of my friends swore up and down to me Chris Lake was on the decks. And to be completely honest I almost fell for it. Green Velvet and Chris Lake are Holy Ship buddies and La La Land started on Holy Ship, so it seemed plausible Chris Lake would pop in just to play a song or two at La La Land. However, at that moment it happened that the crowd parted just enough for me to catch a brief glimpse of the stage and it was Gorgon City.

Since I could never seem to find out who was playing no matter how high on my tippy toes I got, after a while the sets all began to kind of bleed into one. Then right as Green Velvet began to play the crowd somehow reorganized itself leaving a perfect window between everyone’s shoulders for me to see Green Velvet. And if I was only going to get to watch one set that day, I’m so happy it was his. Once I could see that small strip of green cresting the tops of the heads of the guys in front of me, I was happy regardless of how many times I almost twisted an ankle trying to move aside to let people pass. I was there for some of that Green Velvet funk and nothing else really mattered at that point. Whether it was his new tracks like “WOW” with Prok & Fitch or Cajmere throwbacks like “Brighter Days” which featured incredible live vocals by Dajae, I was having a blast. As soon as she started singing the whole crowd instantly began to raise and their hands, phones, or butts to twerk a salute to the real Green Velvet. Star of LA LA Land!

Miss the show or missing the feeling of being in La La Land? Sets by Mihalis Safaris, Gorgon City, and Eskuche have been uploaded to on Factory 93’s Soundcloud. Check them out below! I sincerely hope Green Velvet returns next year and makes La La Land an annual party in LA but with a second show so the venue doesn’t get packed to capacity after the Facebook event page is overrun with scammers trying their best to trick the disciples of the “Deceiver” out of their money for fake tickets. I see your keys moving but what you typing ’bout?