Dirtybird Campout West returned to Modesto Reservoir Campgrounds in California last weekend from October 4th through October 6th. Founded by Dirtybird Records in 2015 and now in its 6th edition, Head Counselor Claude led his fearless flock over some bumps during the early arrival and marched them through a weekend filled with insanely good music, ridiculously silly/fun games, and a ton of debauchery I blush to even think about. Before the festival, Your EDM teamed up with Dirtybird to give one camper an unforgettable campout memory with VNSSA and much to my delight Dirtybird had me out to join in the grownup summer camp fun as well.

This was not my first Dirtybird Campout West and it definitely won’t be my last. Every year gets better and better, and somehow every year my campout bucket list of things I missed just keeps getting longer and longer. This year I crossed off checking out a live drag show, screen printing, and bingo. And added lap dance for your life, speed dating, and Claude’s new game show “How Long Can It Last.” One experience I will never forget wasn’t a scheduled event but should become one.  Dirtybird Storytime. Which was basically just a group of us talking behind the bass lodge stage on Saturday right before the Percomaniacs but should be moved to a campfire with all of camp to listen while making s’mores. Just a suggestion. While there wasn’t a campfire involved, I did get to sit backstage with Claude VonStroke, a bunch of the label’s artists, and a handful of my fellow campers as Counselor Claude told the story of the Dirtybird Campout festival, how he started as a DJ, and the history of Dirtybird’s very first event at Golden Gate park that had a total of eight people in attendance.**

I would say just get involved in everything that is available. The music is amazing. And then there is all this other stuff. You can listen to music for three days straight or you could take a break for one hour and just go do something silly. Which is what I like to do. I’m only good at one game. The water balloon toss. Baby hands.  One of the key things is that even if you’re really bad at stuff you should still like try to showcase it. Like on the bad on the silly stages and stuff like. You’re bad at sports just do the games if you’re really bad at comedy still go up there everyone will laugh anyway.

After that epic story from Claude during the press event, I knew I couldn’t miss out on playing bingo. So after the family set on Sunday, I rallied my crew and texted those who weren’t with me and forced them all to go to bingo with me. While I definitely did not get anywhere close to winning and might have gotten more ink on my friend’s faces than my cards, I unquestionably recommend playing bingo at campout if you attend next year. If you have bad bingo luck as I do it’s still a blast and if you have better luck or less ADD you can win some really cool shiz!  There was a really nice jacket from Claude’s closet that the host suggested but Claude would not confirm came from Snoop Dogg. And the grand prize was VIB ticket with parking for next year’s campout! Other random Campout highlights included getting a t-shirt screen printed by Sasha Robotti himself on Saturday and then floating on the lake after waiting in the screen printing line for about an hour in the sun. And that’s not even talking about all the amazing sets I heard over the weekend. 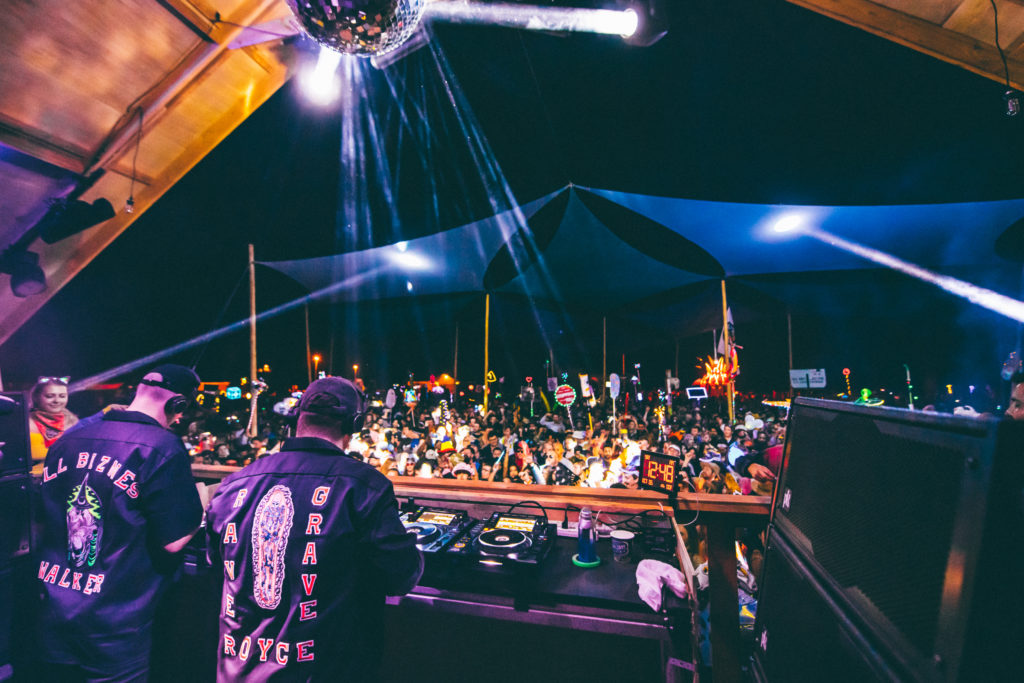 The lineup included a solid mix of Dirtybird favorites, drum & bass legends, hip hop sets, and new faces to Campout. Sasha got the techno rocking early in the day and made clacking momentarily festival acceptable even though outside of his new clack song I still firmly stand behind my own personal saying that clack is whack. Black V Neck rocked both the Bird House stage (which I missed) and the campgrounds (which I definitely did not miss but more on that later). Sherelle threw down an incredible drum and bass set with insane dancers (or maybe they were just her friends) popping and locking on the bass lodge stage. And I can’t leave out the Ardy Party parade, where Ardalan previewed his upcoming album Mr. Good which was played by so many artists during their sets such as Claude VonStroke, Justin Martin, and Walker and Royce who got his new song “Lifted” on everyone’s minds and facebook posts requesting for the songs ID. Mr. Good is set to come out on November 2nd and I look forward to posting more details when I share my Campout interview with Ardalan as well.

With only two stages that were relatively close together, I was impressed by the lack of sound bleed and thought that meant there wouldn’t be much conflict on the lineup. I didn’t account for all the other stages that definitely did not exist in the campgrounds and ended up missing quite a few sets because I was lost in the music back at camp. One set I missed, in particular, was Jhene Aiko’s 30 min R&B set. Pre-fest, I was really looking forward to seeing that set in particular because it was the first R&B set that I knew of being at Campout. Unfortunately, between the OG player’s club lineup going on at the Birdhouse at the same time and headliners playing undisclosed renegade sets back at camp, I totally forgot she was even there if I’m completely honest. Watching the videos that have been posted since I got home, I’m not mad that I missed her performance. I love her music, but the vibes I got from the videos I saw were completely different from Dirtybird. There were no friends (or birdies) with her on stage and it was very much her just singing to the crowd instead of playing with them – -if that makes sense? One of the things I love about campout is the idea of inclusiveness and there not being a barrier between the artists and the campers. I love that Dirtybird has slowly been branching out and booking artists outside their label and friends and I hope they continue doing so. But at the same time, when they do, Dirtybird needs to makes sure those artists know what they are signing up for and are willing to embrace the Campout concept by hosting a game and really getting down with the campers. Or maybe even host their own renegade. 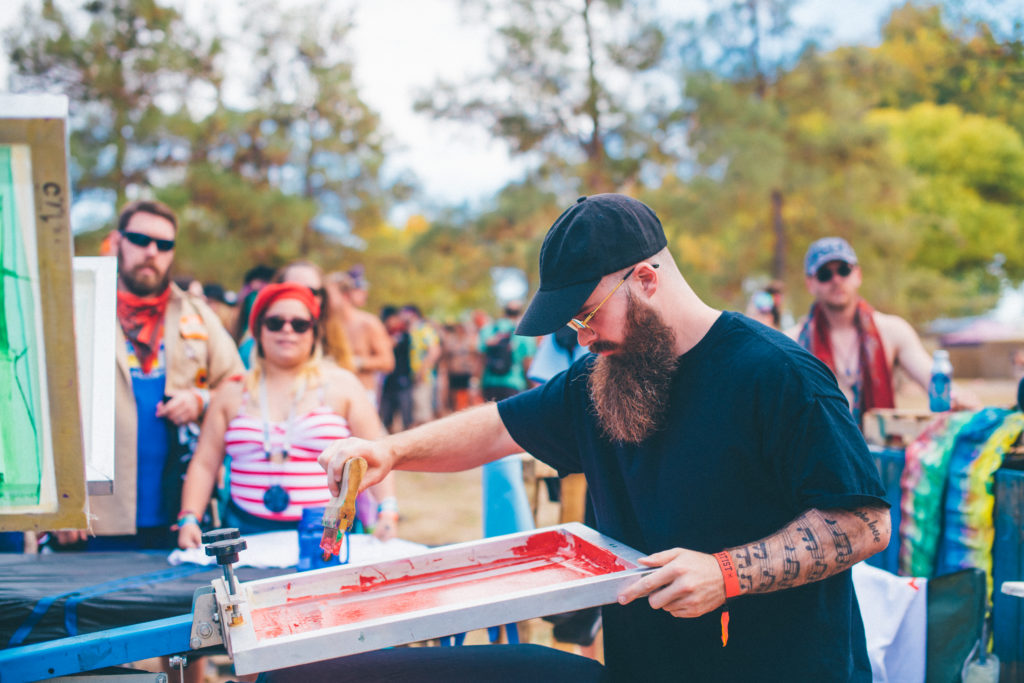 Now I know Dirtybird already has a lot of different events in their umbrella but I’m going to double down (see what I did there campers) and say: I want a Dirtybird Renegades tour! And I want it to include the Martin Brother’s Drum & Bass set that got shut down. Because we all deserve more than an hour of that magic. While there were several renegades that get honorable mentions from me: Camp Claw’d VonStroke Sharky Sea Snacks, Brickhouse which hosted Justin Jay’s Fantastic Voyages crew, Freddy Rules with the aforementioned shortened Martin Bros set, Camp Pho keeping everyone fed with both Pho and tunes from Omnom, and of course the renegade in the bathrooms that absolutely did not happen for the VIPee and VIPooers. But hands down the best renegade, in my opinion, was…

Camp Double Down! Thanks to some detective work on my part that would make the Olsen Twins proud (aka I got on Facebook) I got their full lineup before dinner time. Hosted by Zereticz And Kirros (Kaleidoscope), Scotty Wolf (Rock Bottom Records), Tadros And Zendlo (Cosmic Cactus), managed by Andy Kim and Tadros (and inspired by their friend Terry) in their own stage-like dome made by Nick Nendel the artists rocking the Double Down Dome were: Sage Armstrong, Justin Jay, Morelia, Wyatt Marshall, Steve Darko, John Summit, Black V Neck, Steady Rock, Luke Andy, Zendlo, Franklyn Watts, El Monk, Foolie, Jazzyuk, Luxo, Posse Sauce, Tadros, Kirros, Almost Famous, Minimize, Pillowtalk, Sirkea, Jaksan, Kivi, Nautilus, Muckmouth, Sammy D. (who happens to be one of the 8 people who attended the very first Dirtybird BBQ), Ben Dragon, and Zereticz. I salute you all! 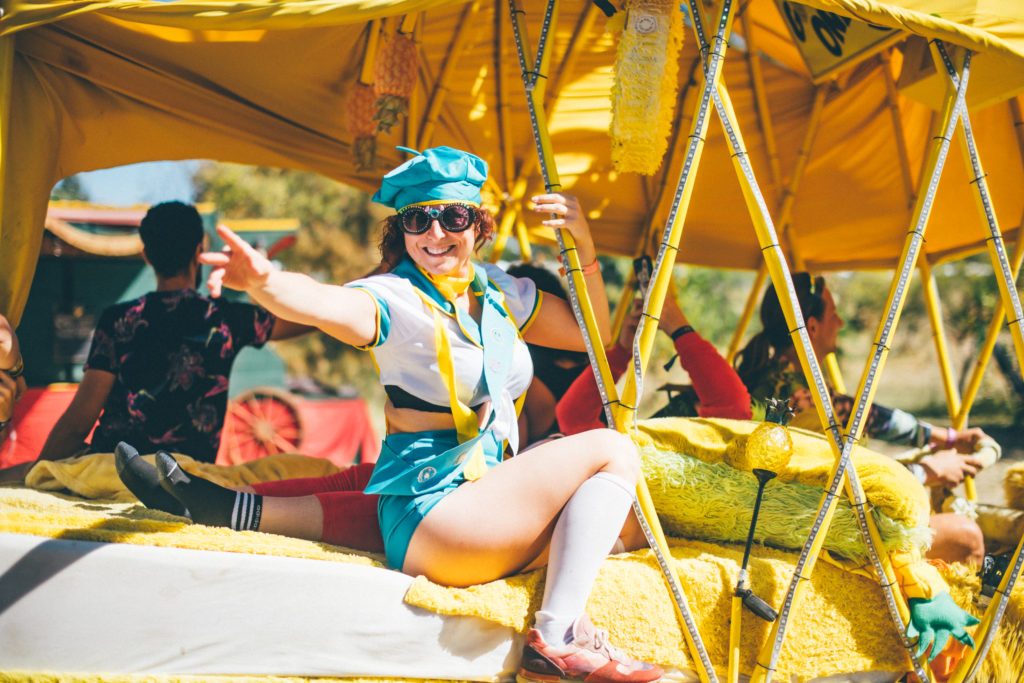 ** more on those stories to be posted soon!