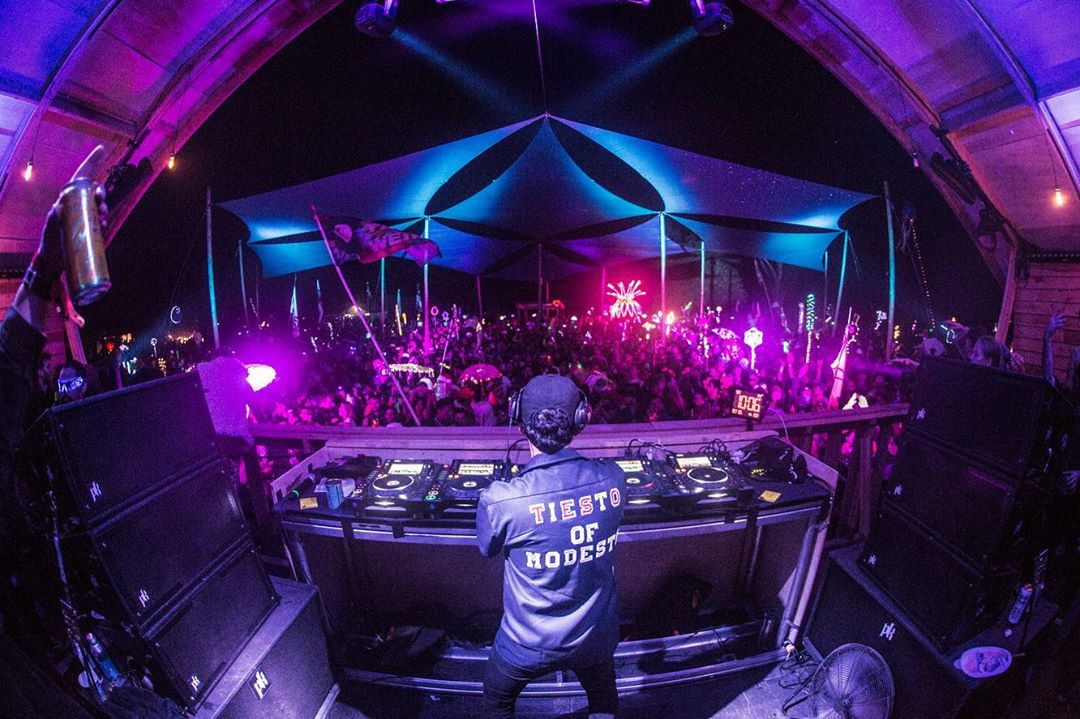 What do a parade float, Mardi Gras beads, and a masquerade have to do with camping? When you are at Dirtybird Campout West Coast 2019 in Modesto, they come together to create the perfect traveling stage for a surprise album listening party as DJ/artist Ardalan took to the beaten campground paths to share his upcoming album, Mr. Good.

And just a few short hours before the Parade embarked from the Dirtybird Games HQ, I met with Ardalan backstage to not only chat about the San Francisco DJ’s upcoming album.

Ardalan and I spoke about the meaning behind Mr. Good and the masks people wear through life. We also talked about going on Escapades with Walker & Royce through New York City, experimenting with a new sound for a future album inspired by his Persian heritage and childhood in Iran, attending his first Dirtybird BBQ at 17, and releasing his first Dirtybird track with Justin Martin at 19. Last of all, we talked about what it means to him that Mr. Good will be the final Dirtybird release ever made in the San Francisco home he shared with his label mate and mentor.

So excited to play The Great Northern on Saturday to celebrate my album release AAAAND my birthday! 🥳 Be sure to grab tickets before they're all gone!Tickets – https://bit.ly/2ps4mH0

You have an album coming out on November 1st. Can you tell me a little bit about it?

My album is called Mr. Good. I called it “Mr. Good” because I wanted to basically talk about the idea of how we as people always somehow wear a mask… hiding our mistakes or flaws. And this album is basically [saying] We all should just be ourselves. You know. And not give a Fuck. But be a good person. In some ways. It goes deeper than that but… that’s what it represents.

Is there any particular event that inspired that message?

I guess that what really [inspired the idea of Mr. Good] is just the fact that musically I had a period where I wanted to play different stuff but I felt like I couldn’t. And I felt like people didn’t know who I really was. What music I play or what type of music I make. So I feel like I had an identity crisis and this album I wanted to do something that was completely me. And I just wanted to accept [who I am] and make the weirdest music ever. And also the most musical music on the dance floor. Works for the dancefloor but also music so you can listen to it at home or anywhere else.

Is there a genre you would put it in?

I guess it is like house and techno. But I do have like a hip hop/drum and bass track on there that I made. Walker and Royce closed out with it last night. Which was really awesome. I [have trouble picking out one genre] But it’s between techno house with a little bit of breakbeat and drum & bass.

***the track Walker and Royce closed out with is “Lifted.” Check it out below. Know there was a lot of birdies hunting for this after Campout. Be sure to check out the rest of the album at the end of the interview.

My friend told me you got started with Dirtybird on Holy Ship. But I’ve heard a couple of different versions of that story. Which one is the real story?

I started with Dirtybird… I started way before Holy Ship actually. It was when I was 17 years old. I went to my first Dirtybird BBQ ever [at] Golden Gate Park 2007. I met Justin [Martin], Barkley [Crenshaw], Christian [Martin], and I met Fernando [Rivera].

Were you already making music at this point?

Kind of. That party changed my life. I was like I want to be a DJ but I want to be like this. That was my first ever experience partying. Because I wasn’t 21. So I’d never been to a nightclub. I started off with my own little rave experience with the Dirtybird BBQ. I’m like this randomly and you know everyone’s just got that awesome San Francisco vibe. And I started going to Sunset Parties at the same time as Dirtybird. And that really is who made me. I’ve learned it from those guys. I’m so blessed to be part of the experience of that… energy.

So you started young!

I started when I was 17. I had my first release when I was 19 with Dirtybird called “Mr. Spock” with Justin Martin. And then I moved in with Justin. He really did help me. In so many ways. And I’m really grateful to have him as like my brother.

Did he teach you more of the technical [DJing] stuff or like life lessons?

We were just working and [we had] our studios in our house. We were living on Church Street where he lived for 17 years. Where he made his two albums: Ghetto Gardens and Hello Clouds. That part of San Francisco has so many memories. So many good spirits. You know? I feel really proud [of making my album in that house]. It’s kind of symbolic in an emotional way [for me]. I ended living there with my album and no one lives there anymore. We all moved out. So Mr. Good is the last album coming out of there. It’s a kind of closure to that time.

A lot of Dirtybird artists have also gone on to create their own label. Is that something you are thinking about?

Eventually, I want to do that. But I want to focus on finishing the music and just releasing it on other labels and Dirtybird. And doing more music with friends. So that’s definitely the pipeline but I’m just waiting for the right time. I’m doing my own party right now. Ardy Party. Parties everywhere and some with Walker and Royce as Escapade. Now, this album is over the next step is some more experimental stuff as well.

Thanks everyone for breaking it down with @uniteamusic & myself at Mr. Good's Mardi Pardy Parade during @dirtybirdcamp!

What kind of music do you like to experiment with?

Well, I’m actually going to dive more into my Persian background. So it’s going to be more Iranian inspired music. Persian inspired music from Iran but with electronic/house and techno. I was born in Iran and moved to the US in 2006 [after] living back and forth from Tehra and the Bay Area. The album doesn’t mention at all my life, but I want to bring along a lot of the experiences [I had] before I moved to the US and put that into the music. Dedicate my music to my people in Iran. That’s what I’m doing right now. It’s a little bit difficult [at the moment]. My studio is not set up yet because I literally had to move out at the same time this album [Mr. Good] was due.

Are there any songs or sounds you remember from your childhood that makes you want to bring that feeling…[to the music]?

There is a lot of sounds. A lot of Iranian melodies. I’m going to do a lot of originally Persian melodies and a lot of traditional Iranian music. And a lot of ’70s Iranian disco-inspired music as well. And I’m just doing a little science experiment to try and get all that together. But I think a lot of it… I play a lot of melodies and I feel like I just remember being in Iran. I feel like I want to some more of that realm. I’m really excited [for the new music]. I haven’t finished it but I think it will be kind of cool to dive into that part of my life. I’ll have more free time [to work on the new music] now that the albums out.

Other than your album do you have anything coming up you want people to know about?

I’m doing some stuff with Walker & Royce as Escapade. We already finished one track and one edit. We’re going to do more new stuff for next year. So looking forward to doing more stuff with those guys. It’s been awesome! I love those guys so much. Gavin and Sam are just like brothers to me and they’ve helped me throughout. Sam really really helped me. I have to give a shout out to Sam Walker and Sebi from Maximono. They help me mixed down my album and without them… it would have been hard to do on my own.

Where did the name Escapade come from?

It actually came from the first time I stayed in New York for a long period of time. I would always just go in and out and Gavin [Royce] was like ” I’ll take you on a tour. I’m going to take you on an escapade”. We started off having amazing dumplings in Chinatown and then he took me to Central Park and there was like a deep house rollerblade party happening. New York house music. And we’re really vibing listening to this dope ass felt [music] that really old school. Yeah. And we’re like yeah “We should do an escapade.” You know I feel like that kind of inspired us that day. By day. Yeah exactly. So yeah when it escalated to a lot of different stuff.

Oh yeah. As a fan it’s… the first time I went to a “rave” before Dirtybird very real with when I saw Mark Friedman play at this rave. And as a fan, I was blown away. I was just 16 years old and then I went to Dirtybird obviously. And I was like man I want to make music. I want to hear my music on the sound system. I just love dancing. At the end of the day. I just wanted to dance. I just want to have fun and dance. I can’t dance. I’m not doing my job.

And most memorable fan experience? As a DJ.

Mannnn. My god, there’s so many. Especially at camp out. People here are so fucking awesome. I think it’s just been crazy. You know like I love being on the dance floor. Being with the crowd. They’re having the most fun. The fans inspire me so much. Like they make me feel so good. Especially in Dirtybird fans. They do such amazing awesome stuff. Make me so many gifts. This guy made me a Pokemon card. [It has] my face on it as Ardalan and then the tracks were the power-ups on it. Dj Pokedecks in Miami. So that was really cool. And then. I had some people from Unity make my album masks. Which we’re going to showcase on the Mardi Gras party. So it’s going to be a masquerade party.

What do fans have to do to get a mask or beads at the party?

I think we’re just handing them out. It’s a parade. Everyone’s welcome.

What’s your Halloween costume this year.

Listen to Mr. Good below and be sure to check out Ardalan’s Facebook for tour info: