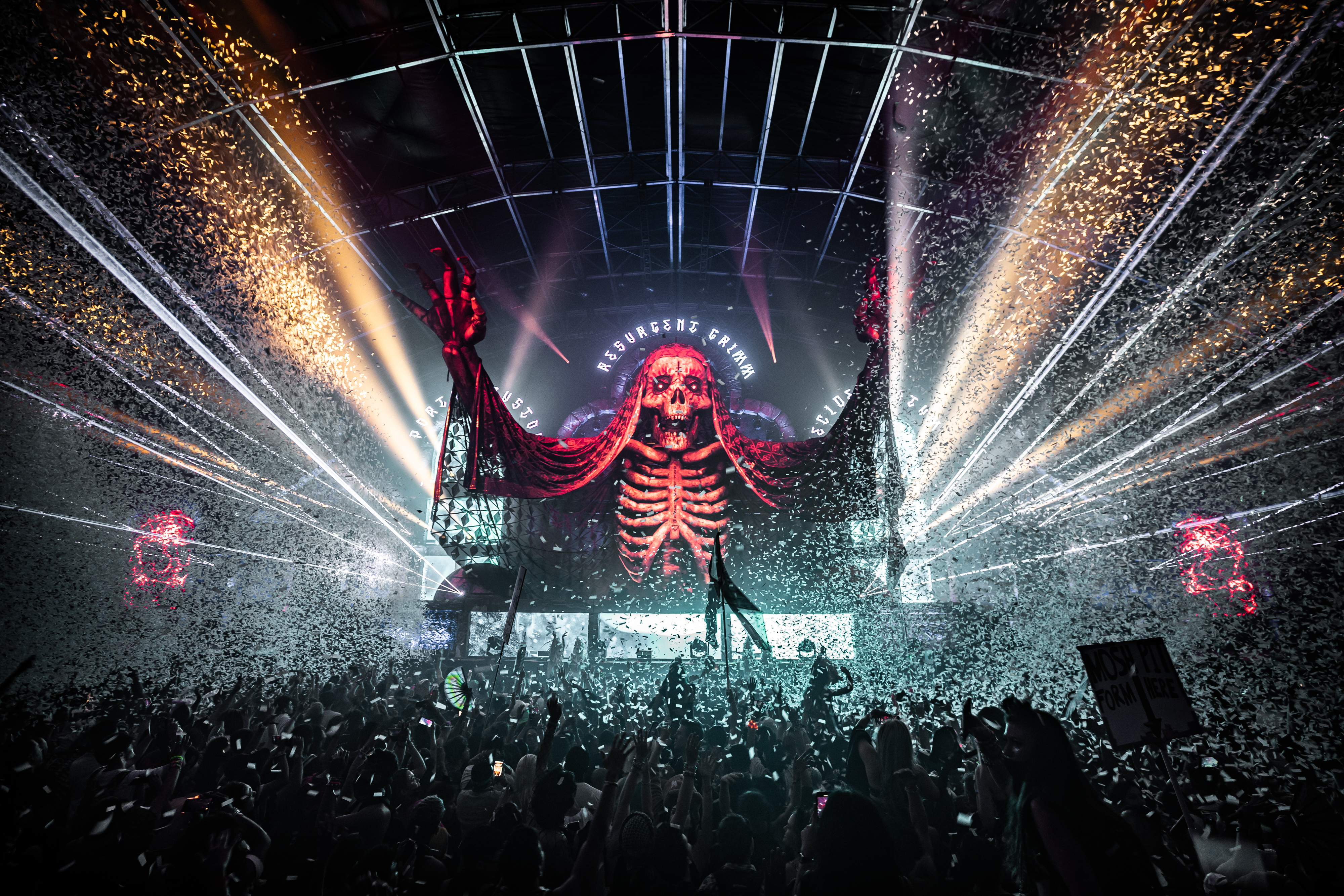 It’s that time of the year again; the leaves are falling, the sun is setting earlier, the nights are getting cooler, pumpkin spice abounds, and Hocus Pocus can be found on cable — it’s Halloween time! If you’re a Southern California raver, that means it’s time for the best festival this side of EDC, Escape Psycho Circus. Taking place at the friendly confines of the NOS Events Center in San Bernardino this past weekend, 170,000 headliners were treated to a completely redone and truly immersive Halloween experience. Insomniac has never cut any corners for their flagship Halloween festival, but this year’s Escape set a whole new bar as the festival was revamped top to bottom for it’s ninth edition.

The first thing headliners noticed when they walked was a huge new entryway, essentially a tombstone wall adorned with the Escape logo. You literally had to penetrate the walls of the festival to get in. Once you were in, you were treated to quite the sensory overload. There were tons of brand new photo ops, including a special scavenger hunt for those in VIP. Thoroughfares got specific names such as Boulevard of Bones and Haunted Hayroad. There was also the brand new Crazy Town where there were mazes, live performances from Insomniac performers, even a silent disco.The set design rivals anything you would find at Universal City Walk.

Oh, and then there were the brand new stages. Instead of the familiar Slaughterhouse, Ghoul’s Graveyard, Chopping Block and Cannibal’s Tea Party, the new stages were The Grimm, Psycho Circus, Sanitarium and Sewer District. Let’s start with the mainstage, the Grimm. Instead of the psychotic clown background of the stage, headliners were treated to the largest Insomniac mega structure ever! It came complete with a gigantic animatronic voodoo skull and skeleton.There were also hieroglyphic spears that moved up and down from the roof of the mega-structure. If you remember the Ancient Egypt zone in Sonic & Knuckles, you know what I’m talking about. Outside of EDC, this was the single best stage I’ve seen at an Insomniac fest ever.

The Psycho Circus stage had more of a theater aspect to it, at least when I went over for Eric Prydz‘s set. It had one large flat rectangular screen, but set further back on the stage. There were LED panels at the top of the support columns, and yes, there were lasers. The Sanitarium was one of those cool stages where the light panels form a half circle going backwards from the stage. There were also lasers here too, but the main feature of this stage was the smog machines. The lack of visibility of the stage was actually a really cool touch and helped keep up the theme of being locked in a sanitarium with crazy people. Finally, Sewer District was hosted by Factory 93 over the weekend. I didn’t catch a set, but it was also a very cool mega-structure with its own fair share of lasers.

As always, the lineup was top notch, featuring some of the biggest names in dance music including deadmau5, Alesso, Eric Prydz, Dillon Francis, RL Grime, Don Diablo and Duke Dumont. However, it was also a highly curated lineup. Bassrush and Basscon both had their own stages on Friday night, and Factory 93 had its own stage over the weekend as well. My journey started at the Grimm on Friday night for Said the Sky’s set around 7 o’ clock. It was what I expected as he played his sad boi melodic bass tunes. Timmy Trumpet followed and really got the evening going with his highly energetic set of hardstyle, all while he played live trumpet, danced like a madman and sipped Grey Goose. After that, Duke Dumont dropped one of the best house sets I’ve ever been a part of taking us deep into a UK warehouse.

Dillon Francis followed that with one of my favorite Dillon sets ever. I was bouncing up and down as he played all of his new hits like “Still Not Butter,” “Bomboclat,” and “DFR” going straight to his moombahton roots. After that, deadmau5 followed up with what was probably my second favorite set of the weekend. Joel threw down a vast and varied set with edits of “Monophobia” and “The Veldt” and dipping into the catalog of hits for “Channel 42,” “My Pet Coelacanth,” “Imaginary Friends,” and of course, “Moar Ghosts ‘n’ Stuff.” It was truly delightful to watch Joel do his thing while teasing both the crowd and the Grimm all throughout.

Saturday night got rowdy right away as I started off with i_o and his dark and groovy techno. However, I wanted to get more lighthearted before getting too deep into the evening so i went to the Sanitarium, which was the Auditotistic stage on Saturday. I caught the second half of Wuki’s set, and if you’ve ever seen him before you know it is an absolute party. Shrouded in the smoke of the stage’s fog machines, headliners danced into the night at this stage. After meeting up with a friend for some food, I returned to the Grimm for Alok’s set. The #1 DJ out of Brazil threw down a bruising set of Brazilian bass, big room, and house.

After that, it was time for Don Diablo, the Dutch future house stalwart never disappoints. He threw down a truly epic set, he set it up early with some house tunes before he went into the vault of hits for “Anthem,” “Momentum,” and his remix of the Chainsmokers’ and Coldplay’s “Something Just Like This.” RL Grime came up next and threw down a masterful trap set, with some of his newer hits off of NOVA like “Pressure” and “Feel Free” and his remix of G Jones’ “In Your Head.” RL also had the dopest costume that I saw over the weekend, rocking the flight suit from Top Gun. Not sure if he was Maverick or Ice Man though.

From there I finally left the main stage to check out Eric Prydz at the Psycho Circus stage. As I mentioned the stage had more of a theater feel to it, and it was the perfect showcase for Eric’s mind-blowing visuals and lasers. In typical Prydz fashion, the set was almost entirely new IDs. Setting a dark tone for the end of the night, the Swedish legend took the packed crowd on a journey combined with his incomparable visuals. Headliners got all the looks they wanted, the Pryda logo, the Mouseville logo, and what the crowd had been waiting for, absolutely insane lasers emanating from the stage while the Cirez D visuals flashed on screen. There is absolutely nothing like an Eric Prydz Halloween.

Suffice to say, I was quite impressed by this year’s edition of Escape. Despite completely redoing the festival, this was a flawless execution. Off all the Southern California raves, Escape remains the cream of the crop. From the stage and production design, the incredible work of the Insomniac performers, the attention to detail, Escape truly sets itself apart from not just any Halloween festival, but any music festival in general. Insomniac will return to the NOS Events Center to ring in the New Year with Countdown New Years Invasion 2.0. Get your tickets here.