So Bored with the USA: A Look into EDM Acts Outside the American Market

If you’ve read any of my posts in the past couple weeks, you will have probably noticed a certain level of, how can I put this, disillusion? Displeasure? Maybe even downright boredom? However you want to label the tone, my feelings about the EDM scene in the United States have gone from idealistic and interested to increasingly mixed and cynical. Now, don’t get me wrong, I still love the scene. It will always hold a special place in my heart for its unique sound and departure from the grunge and pop I grew up with in the 90s. It made me happy to see more and more people get into it, to see it boom into a nationwide phenomenon, until the same songs and sounds became cannibalized and recycled in circles of subgenres and in the mainstream.

So what’s the point of my ranting? Well suffice it say that I’m bored with electronic music in the United States. That being said, I’ve started to expand my horizons in a new weekly segment designed to look abroad for new sounds and styles. I know there are a lot of DJs popular in the US that aren’t nationals, but those acts aren’t what interests me so much. This week, I turn to Latin America. From Mexico to Brazil, the music scenes in the Latin world offer diverse dance music that are influenced by already established musical genres like cumbia, reggaeton, and ranchera music.

The first act I want to cover is that of Maga Bo. This Brazilian DJ has done quite a wide circuit, performing in countries all across Central and South America and even venturing into Africa. His sound is one that focuses much on the cumbia sound native to much of South America, and though he incorporates an electronic/hip hop feel to most of his music, he never strays too far from the classic sounds that influence many of his tracks. If you’re looking for bleeps and blips, you may be disappointed with Maga Bo, but then again, I’d be disappointed with you if all you looked for were blips and bleeps. He has released work on various mixtapes and EPs, namely the Nike Sportswear Pitch Perfect South America Mixtape. He’s also put out a couple of studio albums, with his most recent album, titled “Quilombo do Futuro,” having come out earlier this year. As far as quality producers south of the equator, you’d be hard pressed to find one better than Maga Bo. 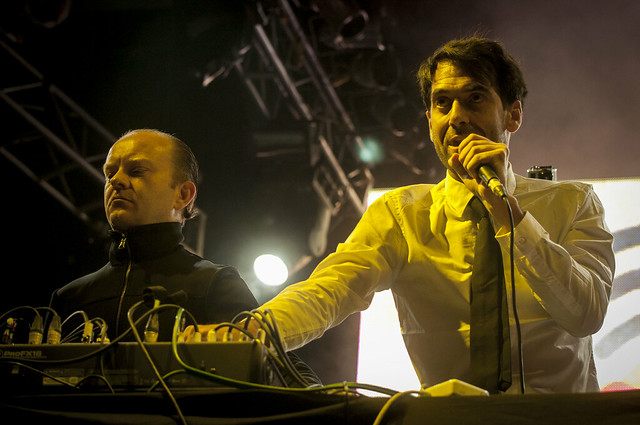 A group that I’m certain Your EDM has covered in the past, Surtek Collective has just started making waves in the United States and Europe after having released songs under the Boys Noize Records series, BNRTrax. The group, comprised of DJs Atom Heart and Original Hamster, is based out of Chile and brings a faster and livelier spin on Latin electronic music (if that is possible). Their sound over the years has evolved from one situated atop their self proclaimed genre of aciton, a combination of acid and reggaeton, to one that feels like a mix of electro, disco, and everything that was cool in the 80s. They’ve released one album, “The Birth of Aciton,” in 2006, and have released two EPs in the last couple months, titled “Shari/Vari” and “Moon Patrol.” Given that they’ve been working with Boys Noize Records, I expect Surtek Collective to show up at your doorstep faster than you can seek them out.

Now the running gag that most people seem to bring up with the Mexican Institute of Sound is that there is no institute, no organization, and no group. MIS is just one man named Camilo Lara, based out of Mexico City. He’s a producer and a DJ that really pulls on some of my Mexican heart strings, not only because he’s Mexican, but also because he incorporates more traditional Mexican Folk and Ranchera music sounds into his quirky and extremely danceable tracks. He’s been around since the mid 2000s, releasing his first album “Mejico Maxico” in 2006, followed by two more albums in 2007 and 2009. His most recent album, “Politico,” was released recently and has been getting some attention among more eclectic music lovers. Keep an eye out for his new album, as I’m sure it will come with some tour dates in the states.

Ondatropica is a group that has recently come to my attention. It looks to marry the smooth, hot sounds of Colombia cumbia with the electronic sounds pioneered in London. The group is made up of Will Holland and Mario Galeano, two guys from (you guessed it) London and Colombia. They’ve got a bouncy cumbia sound to rival much of what’s already out there, but they really haven’t done too much aside from produce a few decent tracks, like “3 Reyes de la Terapia.” They seem to be only scratching the surface, but if you keep your ear to the internet, I’m sure they’ll be making waves this way soon.