On Friday, April 19th, Super8 & Tab kicked off their North American tour at Sound-Bar Chicago. Despite a severe case of jet-lag after making the 10-hour journey from Helsinki to Chicago that same day, the Finnish duo was all smiles as I sat down with them backstage to talk about ASOT Kuala Lumpur, upcoming projects and… naked elevator rides. Intrigued? So was I.

“We. Made. Anjunabeats!” Janne erupts into laughter.

“We created Above & Beyond!” Miika chimes in.

While intended to be a joke, the more I learn the more believable it starts to become. It was 2000, the world had survived Y2K and Janne Mansnerus (DJ Tab) and Miika Eloranta (Super8) were holed up in a studio in Finland.  There was no Super8 & Tab, and Anjunabeats had only just launched as a new label in the trance world. Janne and Miika were interrupted by the arrival of two curious producers who were passing by the studio looking to meet new artists and make new connections. Neither pair recognized the other nor had they heard of each other. Just who were these surprise visitors? None other than Jono Grant and Paavo Siljamäki. The two were on holiday from university visiting Paavo’s native country of Finland. Tony McGuiness had yet to even join the group to form the acclaimed trio that is Above & Beyond. The four quickly realized they had something in common: a strand of trance DNA. It became quite clear to Jono and Paavo that they walked into the right studio that day, and Janne and Miika quickly become two of the first artists to be signed to Anjunabeats. Sounds like trance destiny to me.

It’s been quite a fairytale year for Janne and Miika, and it’s only April.  In three short months, the duo has traveled all over Australia for the distinguished Future Music Festival and played to a crowd of nearly 30,000 fans from around the world at ASOT Kuala Lumpur.

I’d bet you my ticket to Tomorrowland that trance isn’t going anywhere.  There’s no denying that this genre, above other genres of EDM, seems to attract an almost cult-like following of devout fans. Don’t believe me? Google “trance family.” You’ll find an official site, Facebook page, Twitter handle, custom t-shirts, a Tumblr blog, you name it. Now run a search for “dubstep family” or “electro family” or “deep house family.” Mmhmm. That’s not a knock against other genres of EDM but simply an acknowledgement that the trance recipe holds a secret ingredient.

Two of the greatest trance producers can’t even seem to put their finger on it. After much back and forth, we land on an answer we can all agree on.

“Tears of joy. Yes! We’ve been searching for that sentence because we have a sentence in Finnish, but it doesn’t translate into English. It’s kind of like…longing after something, but there’s not really a word for it.”

For those of you who remain skeptical, don’t give up on me quite yet. In the fall of 2011, Janne and Miika were touring through Argentina and had booked a show in a small town a couple hours outside of Buenos Aires. They walked into the club, paused and looked at each other…

“We are in the wrong place…this isn’t going to end well.”

The resident DJ was playing a set of deep house, and his fans didn’t seem to be looking for a mood change anytime soon. In fact, Janne and Miika were fairly confident the crowd was completely foreign to trance as they took the stage. Fast-forward about 30 minutes, and the club had transformed into a sweaty, pulsing crowd of trance fanatics dancing in circles with their arms wrapped around each other. After a nearly 3.5 hour set, the owner of the club had to pull Janne and Miika from the stage, having already stayed open nearly an hour later than their license permitted. The melodies cut out, and the reaction was similar to a hoard of coupon clippers clawing their way through Wal-Mart on Black Friday. Crazed panic. People started hurling their beer bottles at the stage crying out for the music to continue. These weren’t acts of anger directed at Janne and Miika, but rather these clubgoers were experiencing the immediate side effects of trance withdrawal. Either there was something in the water, or trance really did prove its magic that night. 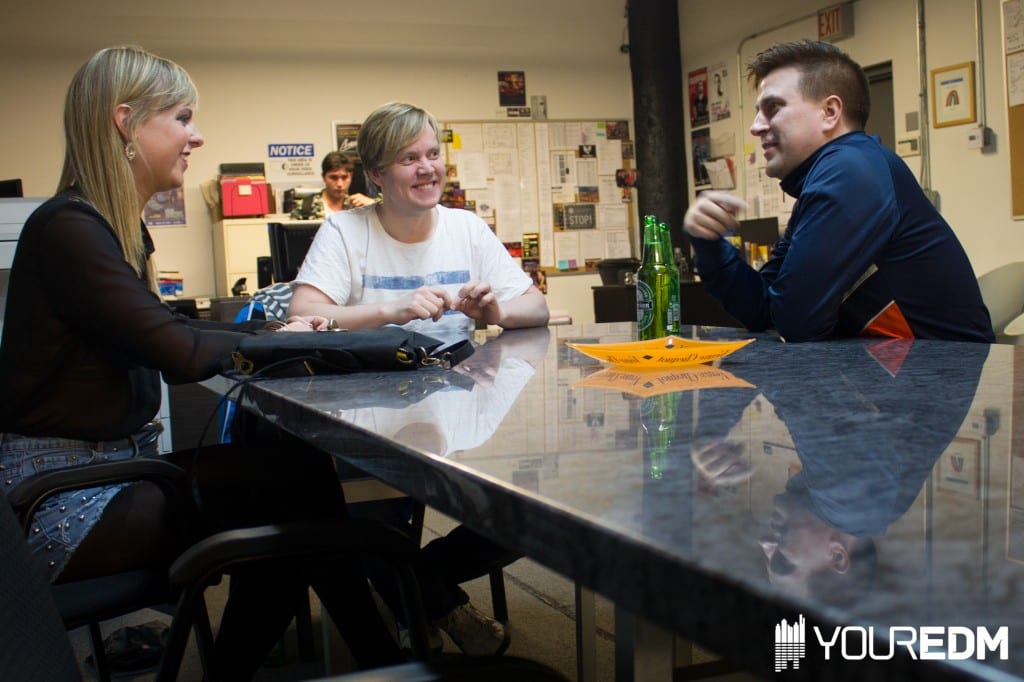 Despite a busy tour schedule during the first half of the year, Super8 & Tab will be spoiling fans with a variety of upcoming projects and collaborations…and (hopefully) a new album by the end of the year. Released less than a month ago, the anthemic “L.A.” has exploded in the trance community and quickly climbed to the top of charts worldwide. A track of particular excitement for Janne and Miika is the soon-to-be-released BT remix of “L.A.” which will be featured alongside a second remix by Juventa.

“I fell in love with the BT remix,” Janne begins, smiling ear-to-ear. “He was absolutely fantastic, he’s our hero, you know. From back in the day, and he still is, the mastermind of trance music… I think the remix he did at the moment, it sounds like that. It has this new sound, but it feels like the old feeling… There’s the original trance roots with new sounds.”

And in exchange, fans can expect a Super8 & Tab remix of BT’s “Surrounded” which they played for the first time during their Sound-Bar set. I’m going to need to find a solid distraction until its official release later this spring. Another new treat for the ears is their new track “Your Secret’s Safe” which premiered at ASOT Kuala Lumpur and sent the social media universe into a frenzy. Oh, and expect another dream collaboration sometime this summer with another trance legend. I’d tell you who, but that would be bad trance karma.

Some exciting news I can share… Janne and Miika are determined to spend the latter half of 2013 concentrating on a new album, a project they’ve been talking about for the past 2-3 years.

Your EDM: “What if BT needs another remix?”

Miika: “He is better than God actually, so…well…then the album is going to be delayed.”

One of the benefits of having nearly two decades of industry experience is the ability to read a crowd and shape your sets to feed off the unique energy at every venue you play. That Friday at Sound-Bar, Janne and Miika were able to create the feeling that we were in a world of our own as they threw down fan favorites like “L.A.” and “Teardrops” to Anjunabeats classics like “Alchemy (Club Mix)” and “Sinai” and debuted some of their new tracks mentioned above.

“We always try to read the crowd and play with the different kinds of moods and go with the flow…” Janne explains. “…To be honest, when we started to play 15 or 20 years ago, people were playing a lot longer sets. In Finland, there were club nights and there was 1 or 2 DJs and they were playing like 3 to 4 or maybe 6 hour sets. We’ve kind of grown from long sets. And now with festivals and all that, you have one hour to play those 50 or 60 tracks. It’s always too short.”

With such a long list of accomplishments already under their belt this year, you’d think Janne and Miika may have already reached the peak of 2013. Wrong. When asked what they’re most excited about this year, they both lit up as Miika eagerly shouted, “Me first!” Turns out both Miika and Janne will become fathers this year, each of them expecting a baby girl within the next few months. Onneksi olkoon. We’ll be eagerly awaiting your next trip to the Windy City.

And if you’re curious about the naked elevator rides, you’re going to have to ask Miika about that pre-show ritual. 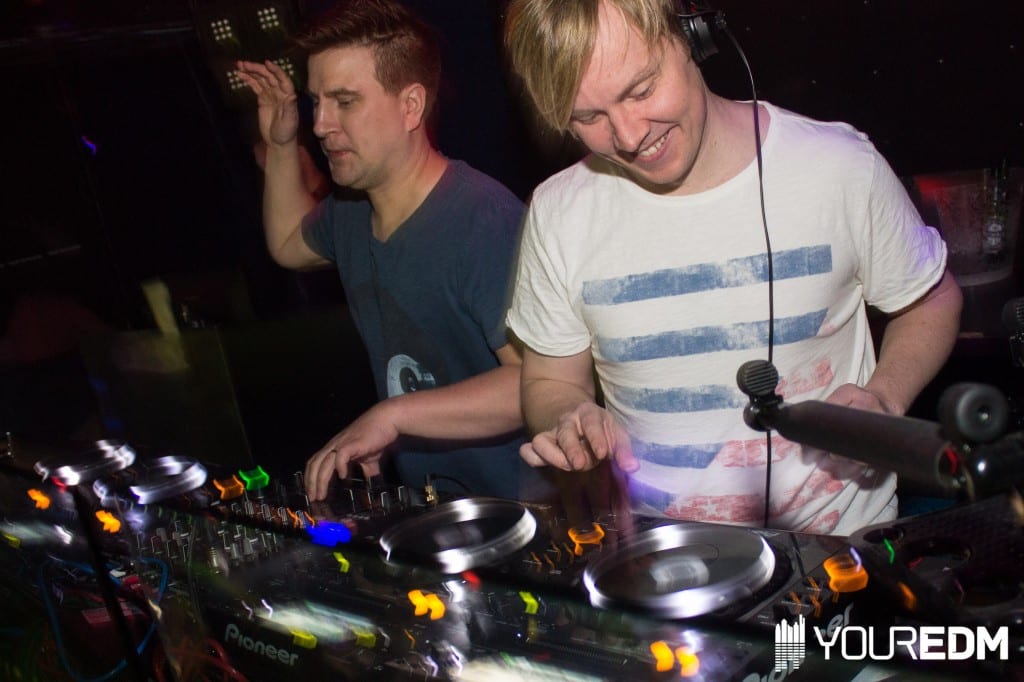