If one day the world was cursed and EDM ceased to exist, most producers and DJs would be struggling to find a backup career. Hungary’s Myon & Shane 54, however, would have no trouble breaking into the world of stand-up comedy. Of course those of you who tune into International Departures every week would hardly be surprised that these two can give you quite an ab workout the second they open their mouths. Their animated Hungarian accents certainly add some pizzazz, but I would argue it’s their sometimes subtle and often not-so-subtle raunchy humor that keeps fans eagerly tuned in every week.

For those of you who still own and frequently watch Billy Madison on VHS, think of the smile on Adam Sandler’s face when he realizes it’s Nudie Magazine Day. That’s the expression that was plastered to Márió Égető’s (Myon) and Előd Császár’s (Shane 54) faces when they played Palladium at Castle Chicago on April 26. These two rising producers are kids trapped in grown-up bodies. They bring inflatable pool animals to their shows. They can quote Star Wars and Batman without a second thought. Shane played the majority of their Chicago set wearing a blinged-out eye patch. They’re having just as much fun today as they were 10 years ago. And that’s just one of the many reasons that EDM fans can’t seem to get enough of them these days.

If you haven’t joined the Myon & Shane 54 bandwagon yet, please stop whatever you’re doing and spend the next 1:00:48 minutes of your life listening to this:

If you found no pleasure in that experience, then I have no desire to ever meet you. If you felt the need to scale the tallest piece of furniture in your room while thrashing your body around like an orangutan, then we should probably be friends. Naturally, my inner Olivia Benson needed to know how the mix’s magic came together:

“Preparation always takes months. During the year we’re collecting stuff…like this one’s gonna be good or let’s keep this breakdown or we have to take care of that vocal. By the time we have to sit down and do it, it’s not that hard,” Shane explains. “There’s always a couple of moments when we think it’s never gonna be ready. When it’s around 11-12 minutes first…and then when it’s around 35-40 minutes we get stuck again, and then the head scratching starts. We used most of the tracks we were supposed to and what are we gonna do now? But somehow it always gets together, but it’s always a struggle.”

So what’s the final track count?

Shane laughs…“I screwed the tracklist up… We just start to put stuff together…Lego’ing as we call it…we just start Lego’ing with the bricks and all of a sudden we have this semi-castle. Like a Palladium. We put it together and then we try to put nice things around it.” 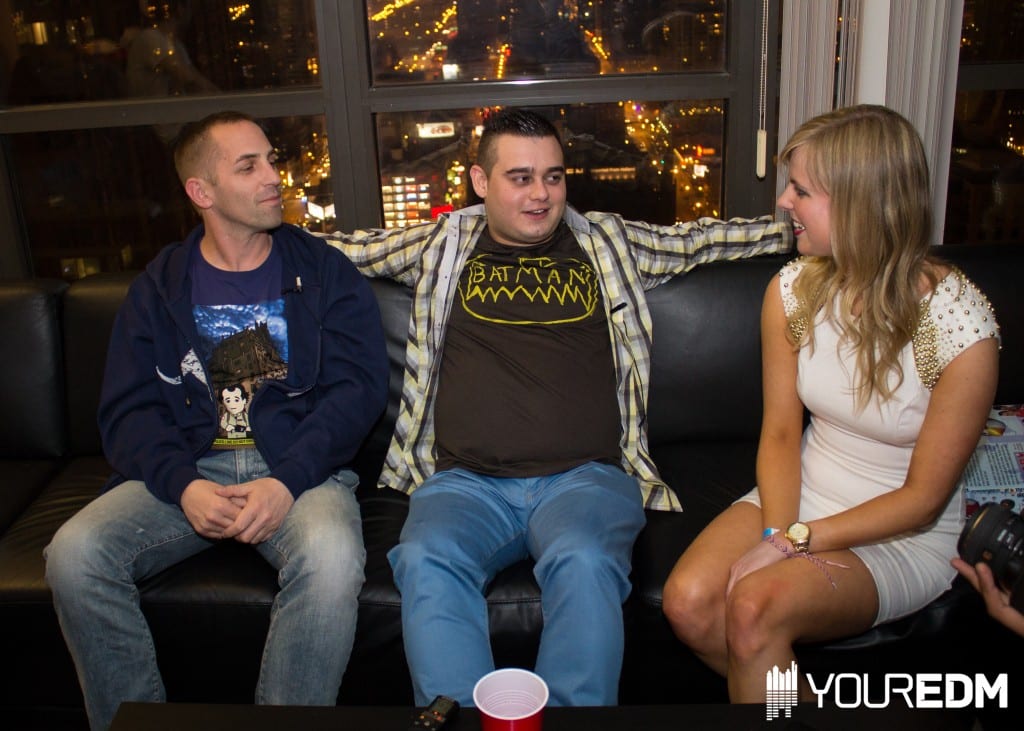 These two haven’t had much downtime in the past few months. In addition to kicking off their North American tour a few weeks ago, they joined the godfather of trance, Armin van Buuren, for ASOT Sofia and launched their own record label, Ride Recordings. With 8 tracks already signed, I’d add Ride to your watch-list. As they look to bring new talent onto the label, they’ve recruited a couple of artists from their native Hungary. One track they’re especially excited for? “Perverse” by a Hungarian promoter turned producer by the name of Charlotte Courage. The track was featured on episode 171 of International Departures. Myon goes on to tell us more about their vision for Ride…

“We’re planning to make nice label parties. And our agent wants to make some stages at festivals…like the Ride Stages.”

And speaking of festivals, what’s on the lineup for the rest of 2013?

“All of them! Every festival, sometimes we play 5 festivals a day. We’re going to play all of the festivals,” a wide-toothed grin spreads across Shane’s face as Myon chimes in…”That’s going to be the money day!”

Even these two Energizer bunnies probably couldn’t pull off 20+ festivals in a year, but they will be making some select appearances around the globe this summer.

There was not a single dull moment during Myon & Shane 54’s set that Friday in Chicago. It is no easy feat to keep a crowd’s energy level on a steep climb for 2 hours, but they pulled it off flawlessly. Not only do they know exactly which tracks to drop to make their fans lose their minds, but they interact and engage with their fans as if you were all at one big house party together. And they thrive off that connection. When asked if they prefer clubs or festivals, they answer without hesitation.

Shane: “In a stadium, the closest person to you, you have to wear goggles to see them. And in a club, you can touch their fingers.”

It’s quickly approaching 1am, and these rowdy mischief makers are ready to do what they do best. But not before sharing their pre-show ritual.

Here’s a glimpse at their show at Palladium Chicago on April 26.