by Your EDM Staff
in Artist Spotlight, Editorials

The cute-but-creepy mouse head. The incredible live show, whether you’ve experienced it yourself or just heard about it from friends. The mixed studio albums, chock full of big beats and interesting sounds. We all know so much about deadmau5: he’s undoubtedly one of the biggest names in dance music. From his humble beginnings as a computer nerd making beats in Toronto to doing massive arena tours in every far-flung corner of the world, deadmau5 has truly made a name for himself and worked his way into the hearts of millions. But why just him, and not countless other talented people?

Well, to start, there’s the mouse head. It’s iconic: those big eyes, the wide grin, the big ears. Whether it’s its original red, multicolored, or lit up at a show with LEDs, the mouse head is a constant, pervasive symbol of deadmau5’s music and persona—and it’s effective because of that: symbolism stands out in peoples’ minds more easily than words or music do, and they quickly become strongly associated with particular people. As such, they’re excellent marketing tools, and while this was probably not what deadmau5 originally intended the head to be used for, it certainly has contributed to his meteoric rise to fame. It also helps that he wears the heads at live shows and other events, putting Joel on the back burner and bringing the character of deadmau5 to life. 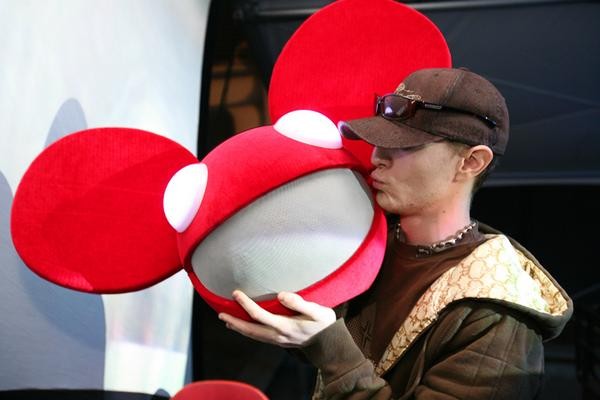 Joel also panders to groups that are frequently neglected in the mainstream. With his extensive knowledge of technology, he could be called a nerd—in fact, the deadmau5 moniker comes from a chatroom—and nerds are not typically a group that dance music is marketed towards or consumed by. Nightclubs, the primary place where dance music is played, are largely marketed as upscale venues for the young, rich and beautiful. Raves are generally places of love and acceptance, but it can be difficult to break into that scene. By not alienating the nerd set, deadmau5 has brought EDM to a new group: using internet lingo like FML and Moar Ghosts N Stuff in his song titles and even appearing in Epic Meal Time, he creates interest and a common ground for people without prior EDM experience to stand on.

Then there’s his versatility. From the smooth, silky progressive house on Random Album Title to the minimal second half of For Lack of a Better Name to the hard-hammering electro on 4×4=12, deadmau5 has proven time and time again that he is far from a one-trick pony. Vanishing Point shows this quite well: utilizing a set of sounds that he typically reserves for electro tracks, the song is still undoubtedly a progressive tune at heart. Despite the wide range of sounds and styles he uses, however, all of his tunes are still undeniably deadmau5: there’s an underlying, recurrent feeling that he brings to his music that ties it all together; it’s a spacious, even slightly ironic sense of self-awareness of his place in music history. Take, for instance, This Is the Hook: one of his lesser-known tracks released on an album that has not been in wide release, This Is the Hook is part electrohouse thumper, part DJ instructional video, and part metanarrative of what goes on at a nightclub. It’s a tongue-in-cheek, ironically self-aware examination of the modern dance music scene, encompassing every aspect of it and acting as a commentary on the industry. This Is the Hook is the perfect example of deadmau5’s very high intelligence—and it’s a marker of how he got to where he is today.

deadmau5 – This Is the Hook

His live shows are another huge selling point for deadmau5. Few producers create a spectacle such as this: elaborate stage design, ridiculous amounts of varied lights, and unparalleled sound setups make deadmau5’s shows a truly unique and intense experience. Aside from his skill at production, he’s an excellent DJ as well: his mixes have incredible flow, and he is expert at sampling, filtering and making things interesting. I haven’t had the pleasure of being able to experience his live show for myself, but from what I’ve heard from friends and seen in videos online, it’s truly something special.

Perhaps the most notable and important factor in all this, however, is deadmau5’s profound understanding of emotion. A far cry from the hard rockers like Ghosts N Stuff and Sofi Needs a Ladder are tracks like his breakthrough I Remember with Kaskade: a silky, sexy, deep progressive house tune with an unforgettable chord progression and a beautiful vocal from Haley, I Remember is full of nostalgia—it makes you wistful for experiences you haven’t even had. Analogous to this is his other Kaskade collaboration, Move For Me—a stunning tune with a similar vibe and another great vocal. The first half of Raise Your Weapon is a testament to the power of musical simplicity: built on a simple series of open fifths with minor dissonance, it manages to end up being more than the sum of its parts before breaking into one of deadmau5’s (thankfully few) dubstep experiments.

Kaskade & deadmau5 – Move For Me

Faxing Berlin is perhaps the most compositionally simple song I’ve ever heard—it’s only three chords repeated for the entire track—but effective use of filters and his incredible knowledge of depth and progression turn it into one of the most beautiful and emotionally poignant house tracks I know of. Then there’s Bleed, a pleasant ambient experiment: a washed-out, fuzzy wall of sound with few definable edges, Bleed unhurriedly works its way through a sea of filters and effects and eventually ends up wrapping itself around you like a warm blanket. It’s comforting and consoling, and intensely beautiful.

The ultimate emotional expression in deadmau5’s repertoire is, of course, the big one: Strobe. Strobe may very well be the best progressive house track of all time. The gentle, atmospheric point-counterpoint construction in the song’s first three minutes is simple but very effective: glass-like synths build into a rising bassline and are doubled on piano, gradually swelling into white noise and a building sense of unbearably emotional tension before its release. That first section alone is perhaps enough of a song on its own, but deadmau5 treats us to even more: constructing a complementary melody that ends up being the track’s main motif, he increases the tempo, drops a kick beat and lands us in atmospheric progressive house heaven. Strobe’s complexity only continues to increase at the second breakdown/buildup section: splitting that main motif into a carefully arranged series of sixteenth triplets, he adds yet another variation of the theme. At this point there are five distinct melodies working to build into that last massive drop that ties the entire track—and the entire album that precedes it—together in this magnum opus of emotional expression, before gently winding down to that main theme and leaving you absolutely breathless. Strobe is the perfect example of why EDM is a force to be reckoned with in the modern musical landscape: it has structural complexity that far surpasses radio standards, and its undeniable emotional core is soulful and intensely radiant.

Why does one artist make it and another doesn’t? There are hundreds of thousands of talented producers all over the world who don’t end up making it for countless reasons. deadmau5 certainly got it all right, though. With the recent announcement of his new album > album title goes here <, out on September 25, alongside continued touring and festival dates scheduled throughout the summer, he’s continuing to make a name for himself and forge a path into yet-uncharted territory. I guess you could say he found his way through the maze and got his reward—cheese.

Note: When moving to new servers we sadly lost some of our old posts, for that reason we will be sharing some of the very early Your EDM editorials and artist spotlights once again!