Summer is here and festival season is kicking off with a bang. Chicago is just about two weeks out from the 2nd annual Spring Awakening Music Festival and the city could not be more a buzz.

As of now all 3-day VIP passes are sold out, but you can still purchase single day GA and VIP passes. As well as a limited amount of GA 3-day passes. And if you want to keep the party going after the festival be sure to check out the after parties that were just announced!

Saturday Night:
Nicky Romero at the MID
Zeds Dead with Salva at House of Blues
Cajmere at SpyBar
Nervo at Palladium

Sunday Night:
Calvin Harris at the MID
Excision and Minnesota at House of Blues
Boys Noize at SpyBar

Not only were the after parties announced but also which days each artist will be performing! 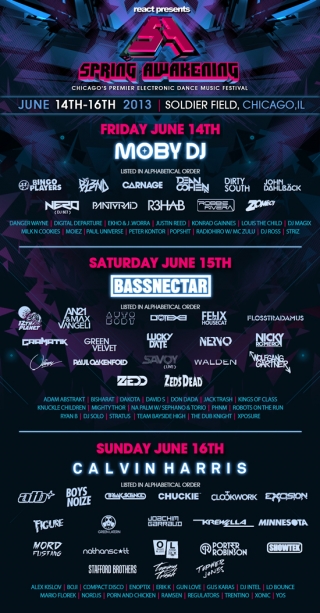 Be sure to snag your tickets at Clubtix.com for the fest and all the after parties while they still remain. See you guys in two weeks!
Get your tickets here!