Hold the Cheese: How To Evade Stalkers with Tom Swoon

Turns out Justin Bieber isn’t the only one fighting off frenzied lady fans these days. Tom’s been known to make a girl or two swoon in his presence. 20-year old Dorian Tomasiak (or Tom Swoon as he’s known to most) has been turning a lot of heads these days and building up quite an international fanbase. And fan club.

“There was a girl in San Francisco and she was stalking me. Like totally stalking me. Everywhere I went – to the bar and stuff – she was following me. And she came up to me and said ‘YOU’RE AWESOME!!!’ and I was like ‘Oh, thank you.’, Tom replies humbly. “It’s not the stuff I’m pursuing, but of course I like that stuff.”

Tip #1 for all you Swoon groupies. If you really want to get Tom’s attention, focus your flattery on his music.

“I like when somebody’s telling me things about my set, about my music. Especially when somebody’s showing me their phone with an iPod on and my tune which I made like two years ago. I’m like ‘Wow, that’s a serious fan there.’ So yeah…I’m pretty happy that I’m getting some hype and people sometimes recognize me.”

If you were to ask Tom five years ago where he would be today, he probably would have told you he’d be working some average desk job in corporate America. When Tom first started producing music under the name Pixel Cheese back in 2009, he never imagined it would become anything more than a hobby.

“When I started making music as Pixel Cheese, I never was thinking that it was going to be my full time job. I thought I was just going to do it for myself, as a hobby for friends and stuff. And then I’m going to go to university and get a job, and the music was going to be something I was doing during the after hours. But then, it went up so fast and so quickly and I got some hype and so I decided to move on. When I realized it was getting more major, I decided to change the name because it was quite silly and cheesy.”

Now he’s opening for some of the biggest names in the industry like Avicii, Steve Aoki and Dimitri Vegas & Like Mike. How many 20-year olds can put that on their resume? No one is more blown away than Tom. He’ll be the first to admit that it’s easy to get lost in the clouds.

“One year ago, I was in Malta opening for Avicii for a crowd of 7,000 people. And the energy was so amazing… Normally I was playing clubs and maybe at one festival for 1,000 people, and then suddenly you have 7,000 people in front of you. I went there, played and gave it my best, and when I went back stage when Avicii was on, I was like ‘What the hell just happened?!?’ And when I got back home after a week, then it hit me ‘Wow, I did that.’… You just don’t realize how big it is, how crazy it is that 7,000 people have all eyes on you. And you’re the guy giving them the music, giving them the reason to dance. The best thing is the shock you get after a couple days or weeks.” 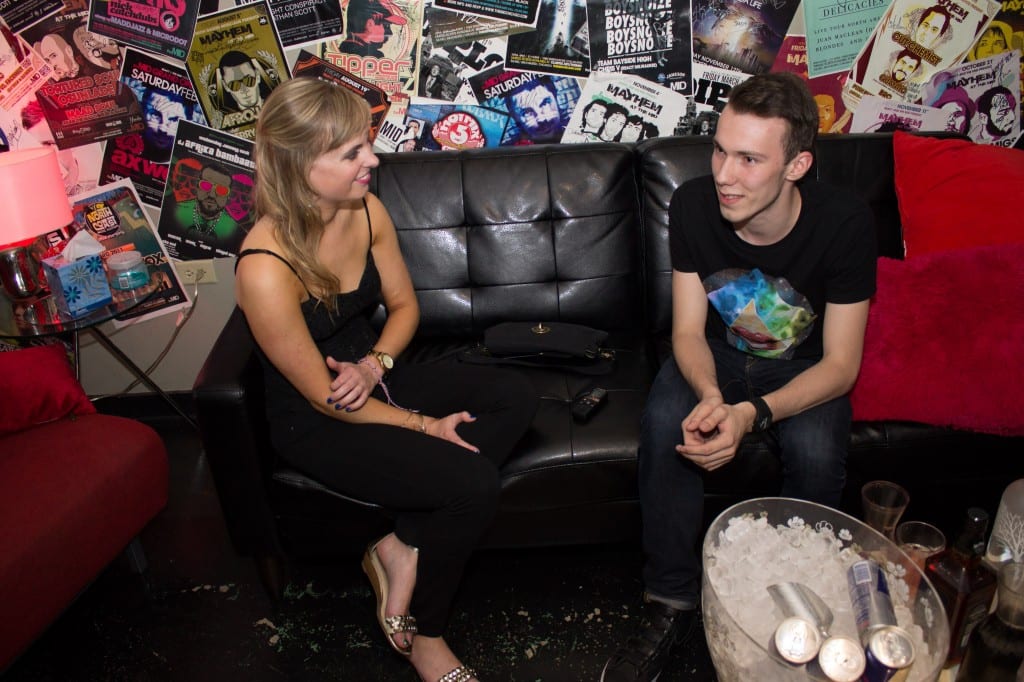 If you’ve never had the opportunity to see Tom in action, you should get your shit together and make it happen. You know when you go to a show and the DJ presses play and then just stands behind the DJ booth and pounds Grey Goose for two hours? That’s pretty much the opposite of what Tom does. He’s one of the most animated and fun guys to be around. When asked how he structures his set, he lets us in on his process.

“Some of the guys are planning their sets from A to Z. They don’t pay attention to the crowd, they don’t have fun. With me, I just plan the first one and the last one. And whatever happens in the middle, God only knows. I have 500 tracks on my USB stick, and then I’m picking a playlist of 100 tracks. In two hours of time, I’m able to squeeze like 50 tracks so the transitions are really quick and I don’t have time to even sip a drink. And then after two hours I end up nearly fainted with a dry throat and like ‘God help me!!!’”

Another reason not to miss Tom when he’s in town? He’s not playing every gig thrown his way. While he loves touring and playing shows, his focus continues to be putting out new work.

“We’re trying to be picky about the shows we’re playing. We’re doing 2-week tours and 3-week tours, and then after that, for a month I’m going back home to focus on my stuff and complete my music. I don’t want to get to the point where I’m touring and I don’t have time to produce.”

And speaking of production, Tom’s got some new tricks up his sleeve that will continue to prove to his fans that he’s not a one-trick pony.

“Right now, I just did a track, a remix actually which is going to be an introduction to my new project…still without a name. It’s totally different than the Tom Swoon and Pixel Cheese stuff. It’s going to be totally slow, house-y sound, to put on in the lounge or restaurant or H&M or whatever. They’re going to be really chill songs to put on in the car and just drive. I’m really excited about it because I want to prove myself as a producer.”

It’s just about time for Tom to polish off his vodka Red Bull and take the stage at The MID but not before some Swoon trivia time! What’s the #1 most played song in Tom’s iTunes library?

‘Disappear’ may not have made its way into Tom’s set that night, but he did manage to squeeze in my all-time favorite mashup. So on one last blissful note, I will leave you with this. Happy Monday kids.