Martin Solveig wears quite a few hats. DJ, producer, director, tennis player, actor…shall I keep going? He has an unmistakable style and enthusiastic stage presence that makes for an unavoidable dance party whenever he takes the stage. His award-winning tracks like “Hello” and “The Night Out” can be heard everywhere from TV commercials to nightclubs to department stores. On Friday, May 24th, we had the opportunity to sit down with Martin before he played Chicago’s inaugural EDC at the Chicagoland Speedway to discuss upcoming projects, career milestones and his native Paris.

Martin has a special talent for creating songs that we just can’t seem to get out of our heads. His latest single with The Cataracs, “Hey Now,” is no exception and was the first of many fan favorites that Martin played during his one-hour EDC Chicago set.

“We started the track with The Cataracs in October 2012…we sat on it for a little bit because we couldn’t find the time to see each other and finish it. There was a version where I was singing a little, but I knew I wanted another voice with me. It took a while to find the right person. When I found Kyle I thought he would be perfect and I wasn’t disappointed.”

“Hey Now” was officially released several days after EDC Chicago.  It’s a track Martin poured himself into, working feverishly to hand select a team to record and release the track. He also shot the track’s music video himself in LA earlier this spring. And while we’re on the subject of music videos, we’re curious to know which artist Martin would like to face off against in his next tennis match. If you have no clue, what we’re talking about please press play:

“The Swedes have started training around tennis – Axwell, Ingrosso, Steve – they posted videos of themselves playing tennis on tour. I have no idea of their playing level. Their rackets seemed alright, but the rest of the outfits were awkward,” he laughs.

This seems like an opportune time to give Martin the gift we’ve brought him…what else but Chicago Cubs tennis sweatbands. He was very eager for his fans to check out the picture below in his trailer. 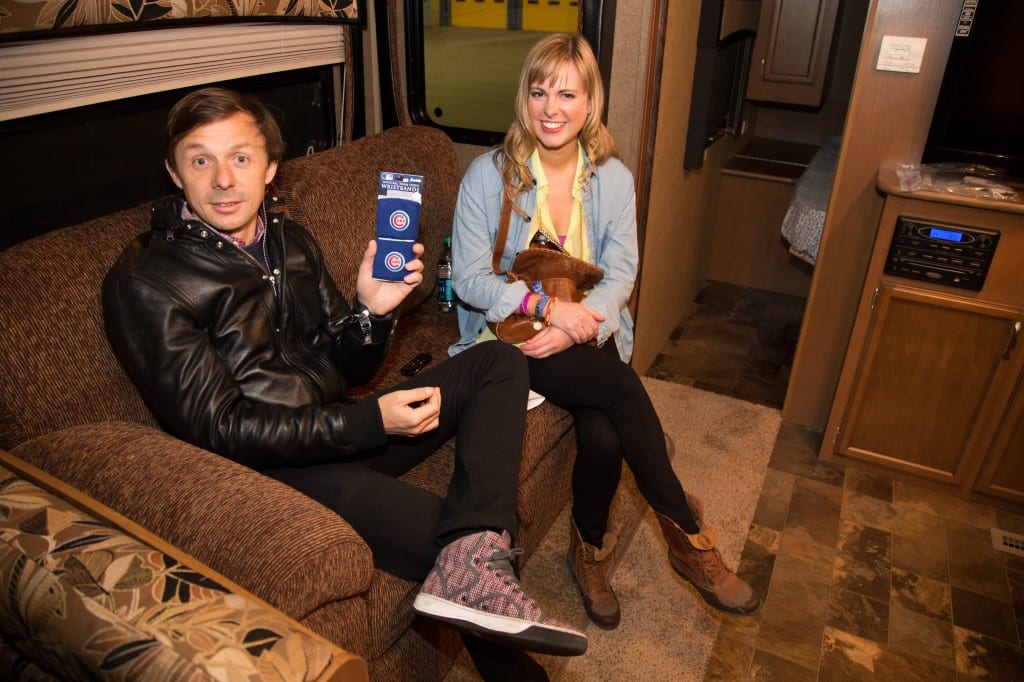 With over 10 years experience in the industry, Martin has played thousands of shows ranging from the world renowned Tomorrowland to tiny indie clubs in his hometown of Paris. He explains his creative process when preparing for a festival like EDC Chicago.

“Preparation is not the same for a festival and a club. So many factors are an influence for what’s eventually going to happen. Like set length. Festivals are short sets but need to give more energy in one hour than two hours in a club…it’s not like going to a club where you’re hitting on a girl and having a drink and listening to music. That’s why set times are shorter, it depends on who is playing before you and after you, who’s on the lineup, if you’re playing early or late. When you’re playing later, you can let the record play for itself. People are in the flow by then. If you’re in the US, there’s a lot of excitement around the EDM culture. You have core fans who are really into it and know everything and are expecting a lot of new music, tricks, the whole experience. All of that can be a good factor…it’s good to be prepared. The more prepared you are, the best you can let it flow and adapt to your audience.”

One fact that surprises us? Martin hasn’t played a Paris show in three years. His last Paris performance took place at the coveted Olympia theatre where world acclaimed artists like Edith Piaf, The Grateful Dead and Jeff Buckley have played before him.

“Paris is my hometown, it’s where I started DJ’ing a long time ago and I had a lot of residencies there. The last show I played there was at the Olympia theatre. After that, it became difficult for me to accept random club shows. I’m still playing summer shows in the south of France and in Corsica where the Parisians are. In Paris, you have 2 categories of clubs – the super tiny indie hipster clubs and monster commercial places and nothing in between. It’s just not really the place for me.”

With a new Vegas residency signed at XS Nightclub and a busy tour schedule for 2013, Martin certainly won’t have a lot of down time this year. So what is he most excited for?

“There are some shows that are my favorite, like Electric Zoo in September. But I’m more excited about the new tracks I’m working on than shows and festivals. I am really excited for tonight though. Chicago is a city that I like, it’s always treated me well and this is my first festival in Illinois. I’m looking forward to it.”

You can listen to Martin’s EDC Chicago set here: