Eat, Sleep, Rave, Repeat. Fatboy Slim’s latest track and the mantra of EDM addicts around the world. But for Norman Quentin Cook, an average day is more like Rave, Rave, Rave, Repeat. His recent trip to Chicago was no exception. After closing out the second day of Chicago’s second annual Wavefront Music Festival with an electrifying 1.5 hour performance, he hustled right on over to The MID where he played a 2.5 hour after-show for a smaller group of devout fans. Did I mention he played Marquee in Vegas the day before? And Maya in Scottsdale the day before that? But when Cook took the stage at Wavefront, he appeared to have the adrenaline of an eight-year-old child who’d just downed a two-liter bottle of Mountain Dew. We were lucky enough to squeeze in a few minutes with him backstage at The MID before his second performance of the night.

“ I really enjoy playing festivals and club gigs…not necessarily both in the same night,” he laughs. “Right now I’m thinking ‘I have to do it again???’ Especially because I’ve already played the big one. It’s a really big thrill playing a show like I did earlier, but you can’t take many risks and you can’t really relax. Everything has to be big and turned up to 11. It’s really nice to get back into a club and go with the groove and feel it a bit more and be relaxed. It’s nice to get back in the soul of it. There will be a different kind of energy to my show tonight – a different vibe – it won’t be ‘Slam, slam, slam!’ It will be more like ‘Tease, tease, tease…’ then ‘Slam, slam, slam!’ Earlier on at Wavefront, it was just a full-on assault. The delicious thing is that I have no idea what I’m going to play right now.”

Whether or not you consider yourself a fan of EDM, I’d be willing to bet you have at least one Fatboy Slim track in your iTunes library. While his musical education dates back to his grammar school days, Cook’s career in electronic music really started to take off when he started playing in the Brighton club scene.

“I was born in London, but I went to college in Brighton and I’ve been living there ever since. We’ve done five really big beach parties in Brighton, and that is fantastic. It’s like tonight was, but it’s my hometown. So it’s got that extra soul to it. I don’t actually play enough in my hometown – I can’t remember the last time I play in Brighton. I get so caught up doing this all year that sometimes I forget. ‘Note to self: Must play hometown.’” 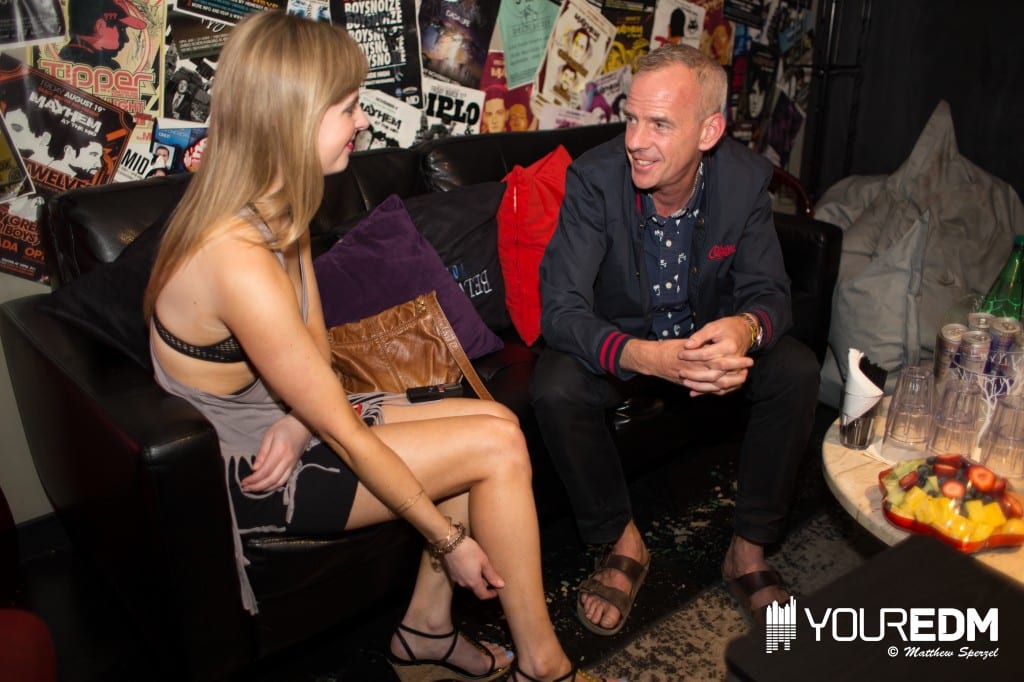 With nearly 30 years experience in the music industry, Cook has established quite a diverse music resume – ranging from worldwide hits like ‘Rockafeller Skank‘ and ‘Praise You‘ to an array of tracks released under projects Beats International and Freak Power to his latest rave anthem ‘Eat, Sleep, Rave, Repeat.’

“I kind of have my feet in both camps – I’ve been underground and mainstream. I’m always flitting back and forth between the two, to be honest. Electronic music has gotten very commercial and widely accepted at the same time, which is great for the whole industry. Even the most underground people are feeling the effects of people like David Guetta and the Swedes. It’s really interesting to come to Chicago which is the birthplace of house and see how it’s kind of cross-pollinated and evolved. We all listen to these records that came from Chicago or Detroit, and then we did a European version and a Frenchman and some Swedish guys threw it back to you. I’m very aware of Chicago’s place in that whole story.”

Another interesting addition to Cook’s resume? His own musical. Well, sort of. ‘Here Lies Love,’ a project Cook collaborated on with David Byrne of the Talking Heads, tells the story of Filipina First Lady Imelda Marcos and follows her rise to power and subsequent descent into infamy and disgrace. The project has only appeared in New York City to date. Not quite a musical or a period piece, ‘Here Lies Love‘ is a theatrical event encouraging audience interaction and boasting a 360-degree scenic and video environment.

“I think the idea is that it will run in other places. They extended the run in New York as much as they could. David’s plan was to do it around the world. It’s always going to be Off-Broadway. It’s quite a weird show, so it’s never going to be in traditional theatres. My involvement in that was in co-writing. The theatrical part of it is all David’s thing. It’s great fun – I went out for the opening in New York, and it’s one of those things you never thought you’d do in your career. Go to the opening of your own musical. Nothing David Byrne does is by the book – he always has a slight twist. It’s a musical, but it’s not like ‘Evita.’ You have to stand and dance and get involved.”

It’s time to give Cook a few minutes alone time before he takes the stage at The MID. Perhaps time for a couple Red Bull’s or a 5-hour Energy? Not quite. Cook has established his own pre-show ritual to avoid encroaching exhaustion from kicking in.

“I put on my Hawaiian shirt, I kick off my shoes and Al my tour manager slaps me really hard in the face. Because that way you go on fighting.”