10 Lessons I Learned On Planet Tomorrowland

Saturday, 7/27/13. It’s day two of Tomorrowland, and Armin has just taken over the decks on the main stage. The thunderstorms show no sign of letting up, ponchos have rendered themselves useless yet the torrential downpour only seems to add energy to the already bustling crowd. Armin gets on the mic, and on the jumbotron we see the happiest smile in the world take the face of the happiest man in the world. Through tears, Armin announces to the world that his wife has just given birth to a baby boy. And as the violins of “Intense” fill the air and fans not so subtly start to wipe their eyes, he dedicates his set to his new son. This is what Tomorrowland feels like.

For those of you who weren’t lucky enough to join us this year, here are a few lessons to keep in mind as you plan for Tomorrowland 2014.

1. Everyone speaks PLUR. Tomorrowland is the happiest place in the world. It doesn’t matter if you traveled to Boom alone or with 20 of your college buddies, everyone at Tomorrowland is looking to make life memories with new and old friends. Even the Dreamville bros (see #8) paused their late night renditions of “Don’t You Worry Child” to wish us the safest of travels as we departed our campsite at 4am on Monday. And a shoutout to my Austrian friends who decided after thirty seconds of meeting me that I deserved to be put up in a cheerleading mount so I could have a better view of the stage. Now that’s rave love. 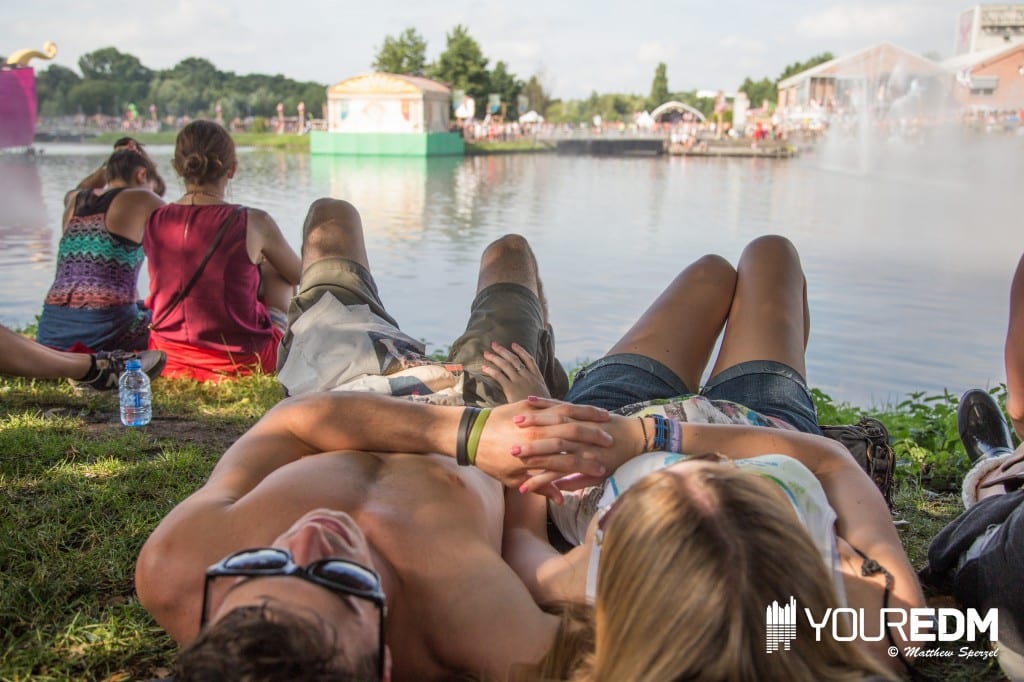 2. The Belgians control the weather, not God. Fun fact: It rains in Belgium. And by rain, I mean 1-2 times a day the sky catapults tidal waves of water onto your head. Monsoon rains can be highly entertaining for about 5-10 minutes as you wash off all of the day’s sweat and throw your hair from side to side like you’re in a rap music video. But soon you find there is about 3-5 inches of water in your combat boots, your teeth are chattering so loud you can barely hear the music and your poncho is as wet inside as it is out. Fortunately for the people of Tomorrowland, the Belgians don’t put up with rain. They’ve resurrected the cannon, and this time it isn’t being used in a game of battleship. As one of our Dutch friends kindly explained to us on day one, the loud booms we were hearing were not thunder but rather the sound of “hail cannons.” Originally developed for farmers to prevent crop damage from storms, these cannons disrupt water droplets poised to become hailstones and break up rain clouds. Take that Zeus. 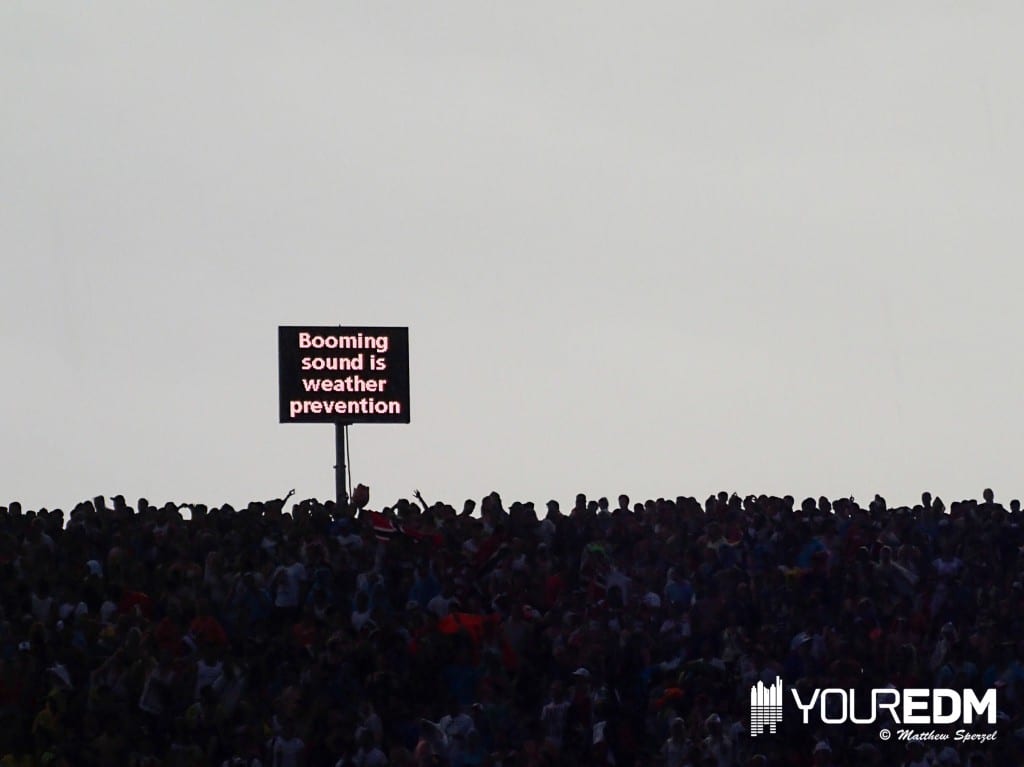 3. Europeans really like Calvin Harris. And “Animals.” And Afrojack. When I arrived at Tomorrowland, I was optimistic that I’d be greeted by a musically sophisticated, more cultured crowd than what I’ve grown begrudgingly accustomed to in the States. By the fourth time “Sweet Nothing” came on (I’m just talking about day one), I was tempted to take out the free earplugs given to us in Dreamville. While the sets played on many of the smaller stages were more original and showcased new and less mainstream music, the bangers dropped at the main stage all weekend were representative of what’s played on your local radio station’s weekly top 40 show. And the crowd went nuts for it. Over and over and over again. The good news? Front row seats for some of our favorite artists who weren’t at the main stage, including Markus Schulz’s 12-hour set on day one. 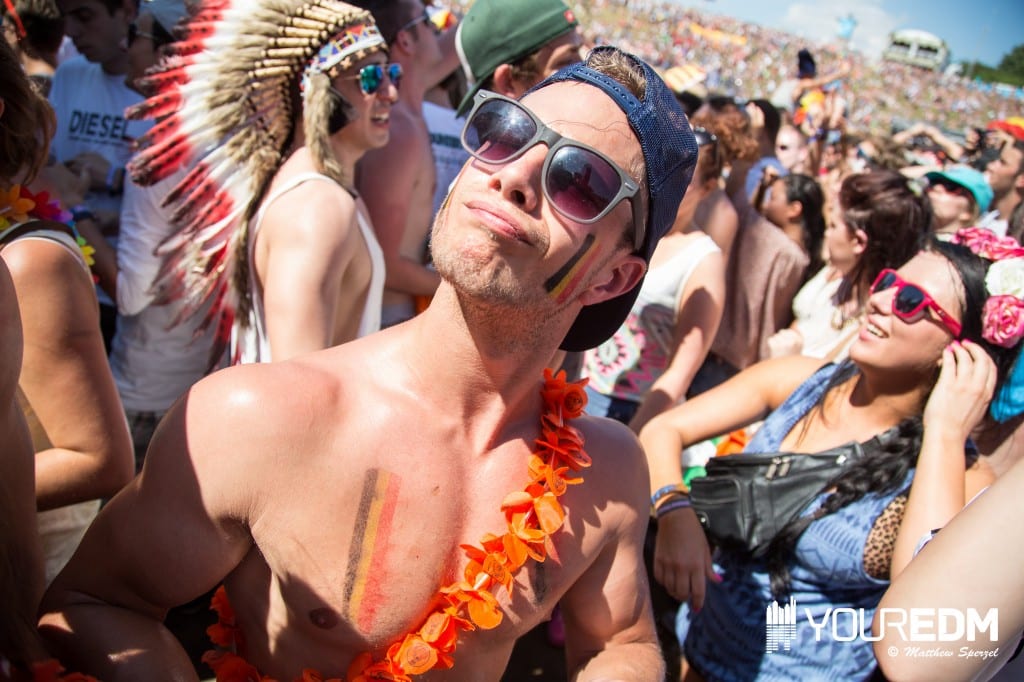 4. Intensity runs 1,000 rows deep. While we didn’t agree with their music taste, the stamina and energy of our new friends made it difficult to hold a grudge against them. While sitting on the shoulders of my friends and looking around, not a single person was standing still. At most festivals, you find the most passionate fans in the first 10-20 rows closest to the stage. At Tomorrowland, we’re all crazies. You don’t just go to Tomorrowland last minute because your friend happened to have an extra ticket lying around. Tomorrowland involves planning…for some of us it involves a full 12-months of planning…so we want every second to count. 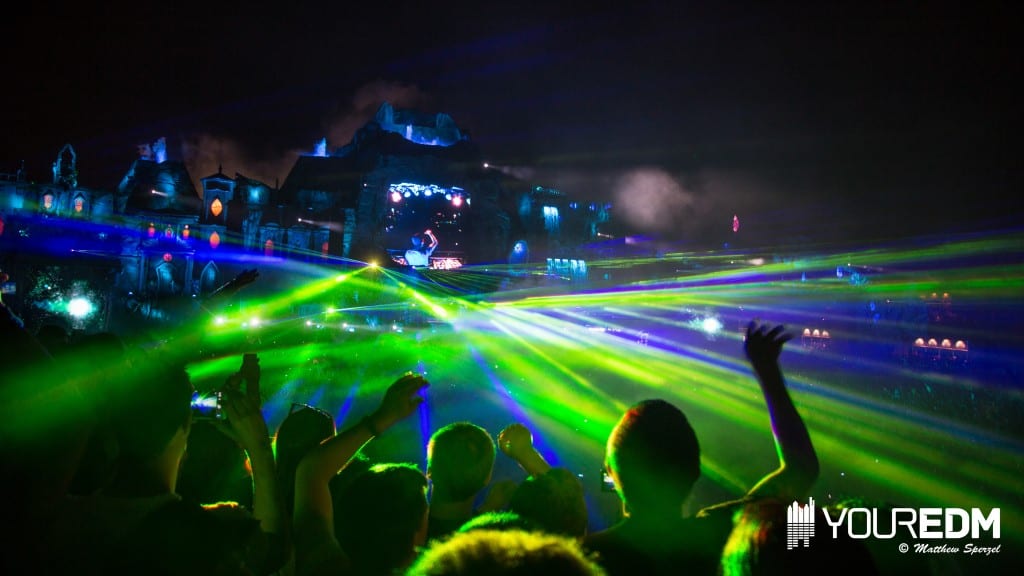 5. It’s all about the little luxuries. Tomorrowland was festival six of eight for me in 2013. Eight festivals equals 24 days of sweaty, smelly crowds, porta potties, getting your feet trampled, watching boys pee on fences…you get the point. We do it for the music, but there are some aspects of the festival scene that wear you out. But the minds behind Tomorrowland have your back, and they recognize that even the smallest detail can impact your overall experience. Freshpoint stations quickly became my best friend. This was the name given to the bathroom and sink stations set up all throughout Tomorrowland. Not only were the vast majority of porta potties in Tomorrowland flushable and stocked with toilet paper, but there were staff at the exit of each Freshpoint station equipped with men’s and women’s deodorant sprays. Yes. You just walked right up to them, lifted up your arms and you left smelling like a flower. Another common cause of festival stress? Your phone battery is already down to 20% and it’s only 6pm! Tomorrowland has you covered there too. For 8 tokens, you could rent portable phone chargers that fit right in your purse or pocket. When your phone is fully charged, you return the charger and receive 7 tokens back. These are just a few of the little things that went a long way in making our three days in Boom even more carefree. 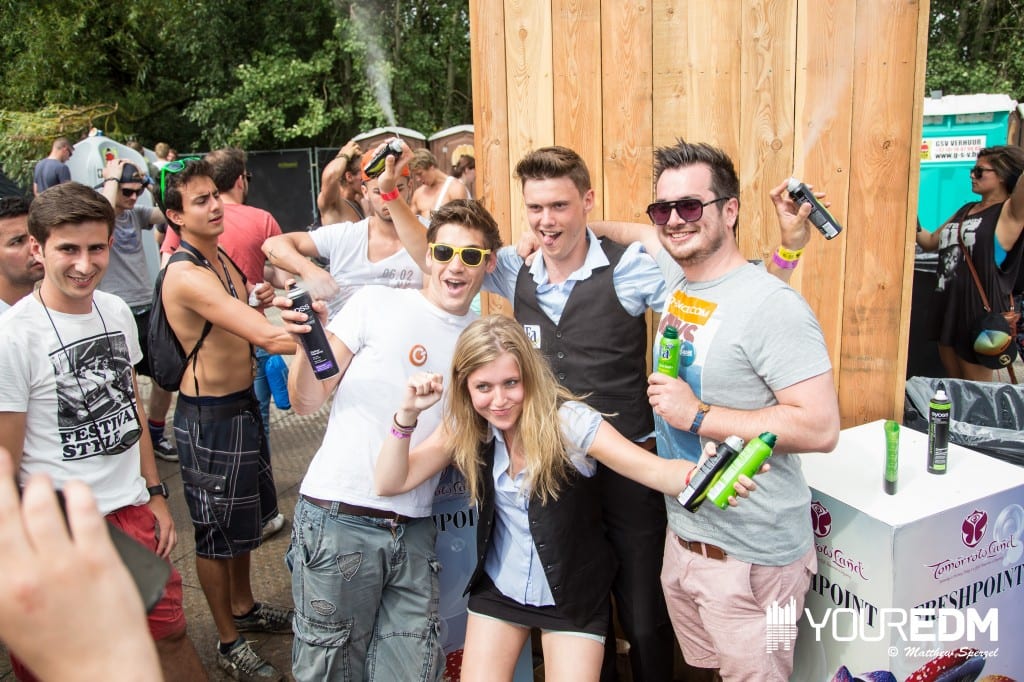 6. Sometimes the view is the best from the back. As seasoned festival goers, my rave crew has lengthy discussions around where we want to station ourselves for certain performances. While we normally opt for navigating our way through crowds of dirty stares and elbow jabs to get as close to the stage as possible, a sentimentally persuasive text from a friend convinced us to leave our spot near the main stage and head up to the top of the hill as Aoki closed out day three of Tomorrowland. And that mental snapshot is something I’ll carry with me until I’m buried in a pit of glowsticks one day. 180,000 world citizens united by music, 1,000-watt smiles plastered across their faces while throwing their arms in the air in unison. 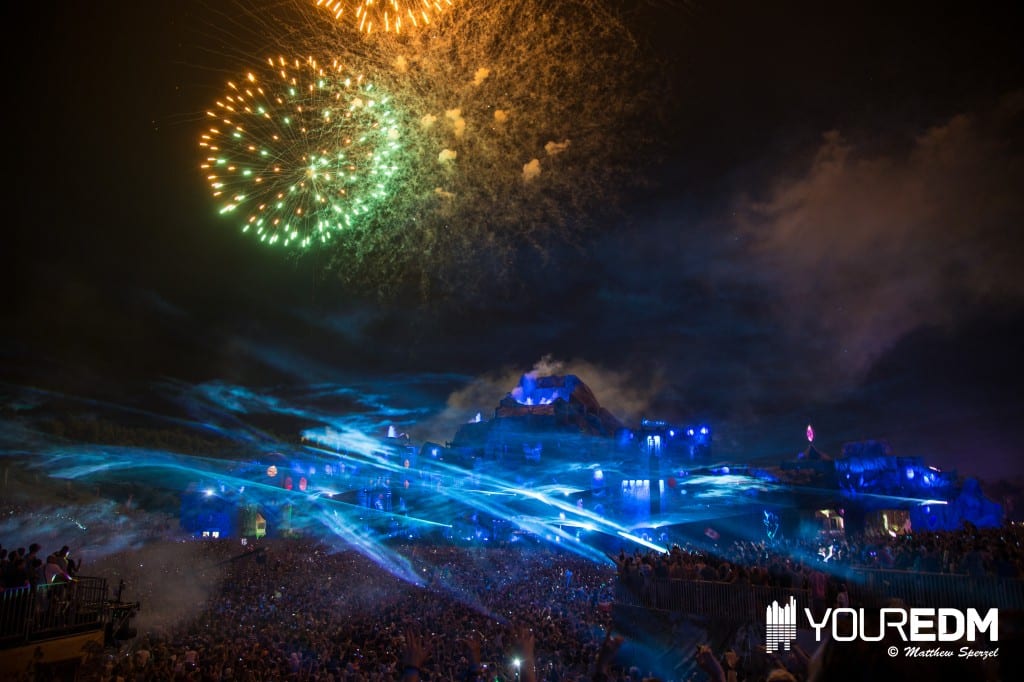 7. When you have an international guestlist, you have to plan your menu accordingly. While I can easily justify the calories when eating mediocre quality burgers and pizza for three days at a festival, my immune system pays for it come Monday. Tomorrowland made mealtime an enjoyment rather than a chore by offering a wide range of meals and snacks to satisfy festival goers from all over the world. Some of our favorites were spicy Korean noodles, freshly made sandwiches, tapas and of course, Belgian fries. They even had a gluten-free vegetarian stand with delicious hummus sandwiches even a carnivore could enjoy. Not to mention the sit down restaurants within the festival grounds, including a steakhouse, if you wanted to get off your feet for an hour and relax. 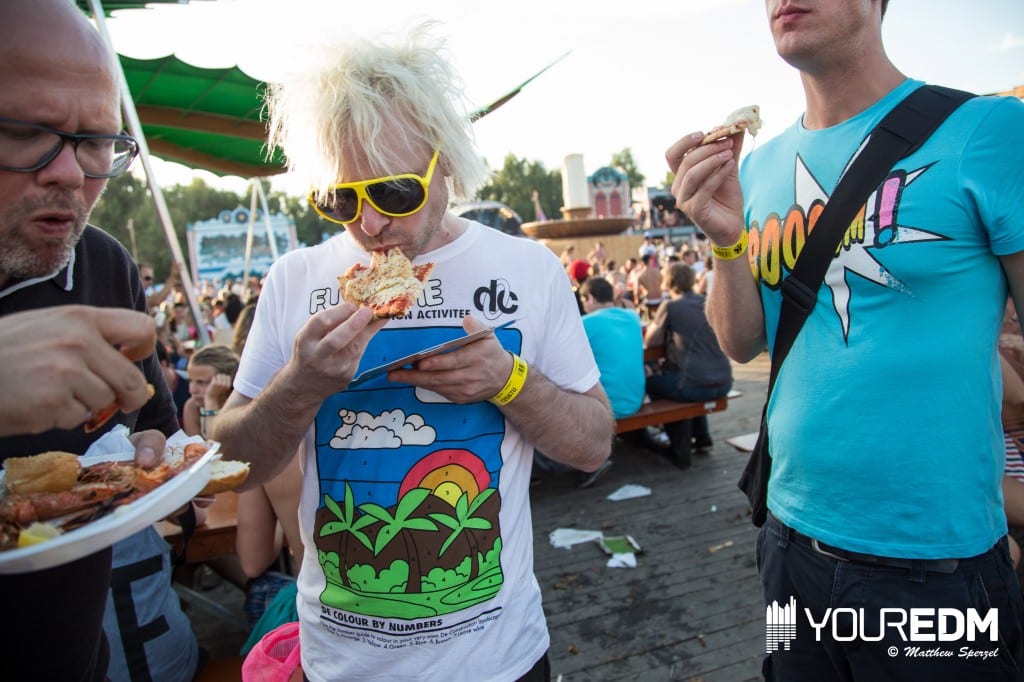 8. Dreamville is a Euro bros fest. After a full day of travel the day leading up to Tomorrowland, all our rave crew wanted was a solid night of sleep as we looked forward to three days of fun. Unfortunately, we were not on the same page as some of our tent neighbors. Rather, we were woken up at 4am on Friday morning to a group of barbarian men chanting “Levels” as if they were at a Chelsea vs. Manchester United football match. As a reminder, it is August of 2013. After what seemed like 20 hours of torture, a lively Australian angel came out of her tent and shouted some beautifully aggressive threats their way until they shut up. The girl-to-guy ratio in Dreamville is about 1-to-10. This has its advantages (hint: little-to-no shower lines for girls!), yet it can also lead to dreams of all-girls boarding schools in Switzerland. If I have to see one more guy whip out his noodle and pee against a fence or in the middle of a crowd, I’m going to announce a life of celibacy. 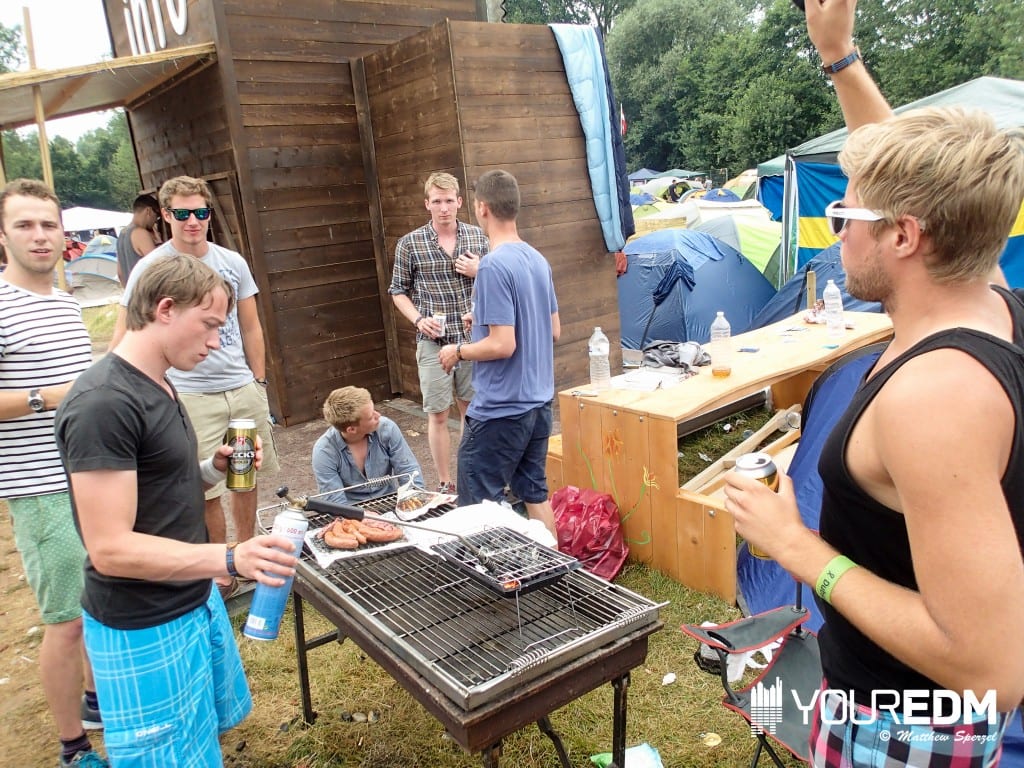 9. Dance it off. What do you get when you mix 2 days of extreme sports in Switzerland and a friend who’s read one too many issues of Outside Magazine? A trip to the medical tent in Dreamville. When one of our friends lost all feeling in her left thigh during the trek from Switzerland to Belgium on Thursday, another one of our friends convinced her she might have a blood clot that could travel to her brain and kill her. So we figured we might as well familiarize ourselves with the location of the nearest medical tent to our campsite. Most of us waited outside as she checked herself in and filled out the mandatory paperwork. First, we watched a lonely blonde girl stumble out of the tent wrapped in a space blanket and weave her way down the campground trails back toward The Gathering. She was alone. And incapable of walking. But I’m sure she held it together with that space blanket by her side. Lesson 1: Space blankets cure all. A few minutes later another lost soul began limping out of the tent sans ankle brace or ice pack. So what if you rolled your ankle? Get back out there and dance harder! Lesson 2: Dance it off. All joking aside, our experience within the festival walls was much more positive. Medical tents were clearly located throughout the park and medic crews were constantly perusing the crowds looking for festival goers in need of help. And when we approached the medics for Band Aids during our travels on day two, they stopped everything they were doing to help us sterilize and dress our rave wounds. Oh and my friend with the numb thigh? She’s alive and kicking it. 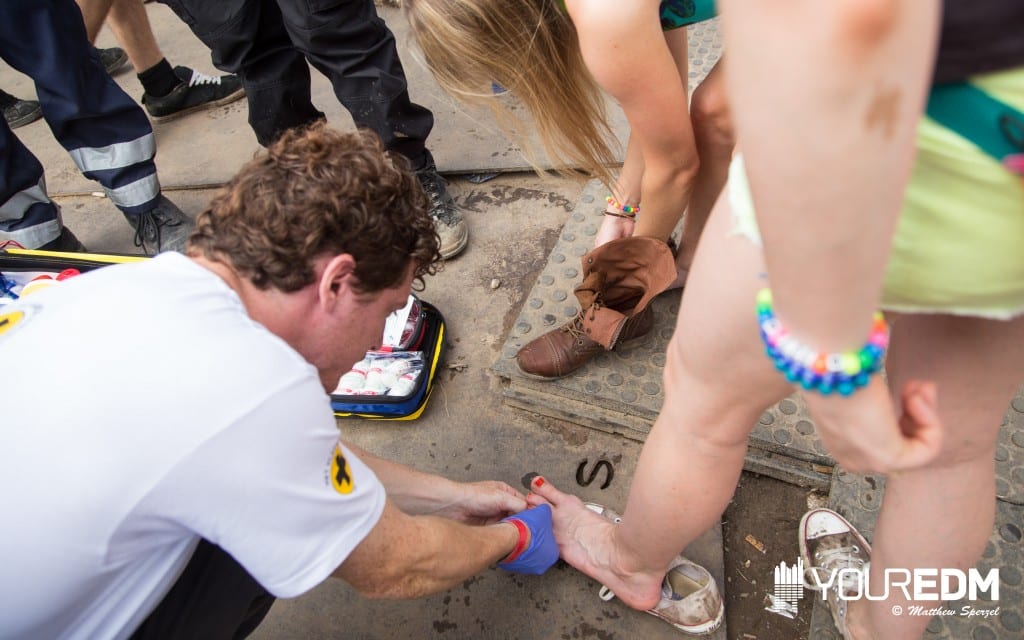 10. Tomorrowland is the Aston Martin of music festivals. After two years of anticipation, Tomorrowland lived up to the hype. Despite the bro chants in Dreamville and the mud-ridden boots that were left to the Belgian wilderness, Tomorrowland is hands-down the best music festival I’ve ever taken part in and was one of the most incredible experiences of my life. So much so that I’m hesitant to say anymore because words simply cannot do it justice. My biggest piece of advice? Start befriending Belgians. Immediately. Because I’d love to be dancing beside all of you next year in Boom. 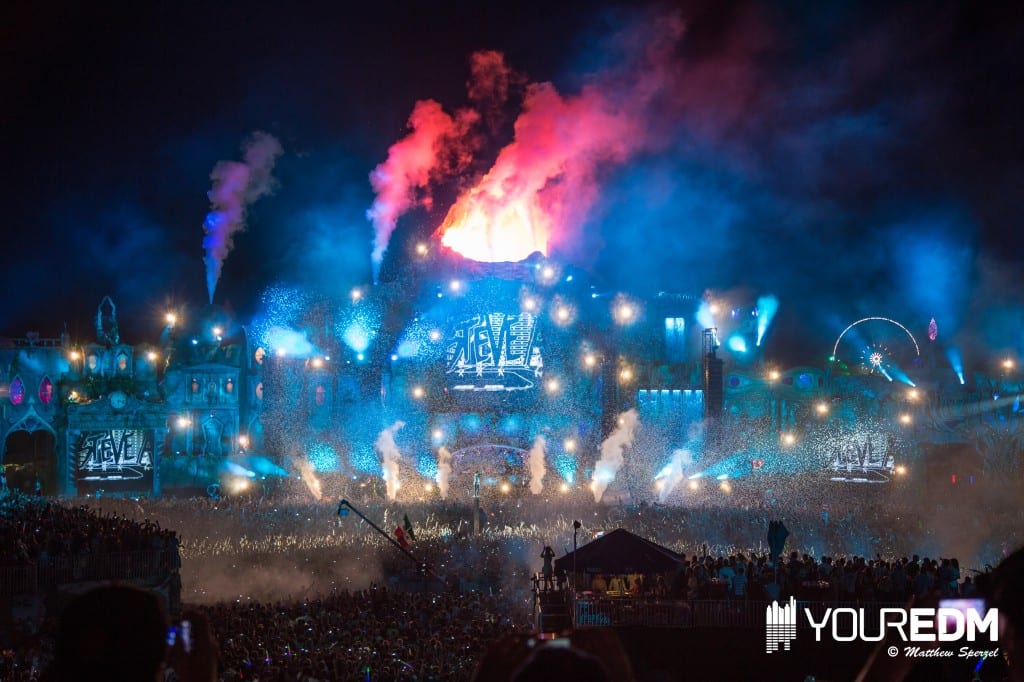 See you next year, cheers! 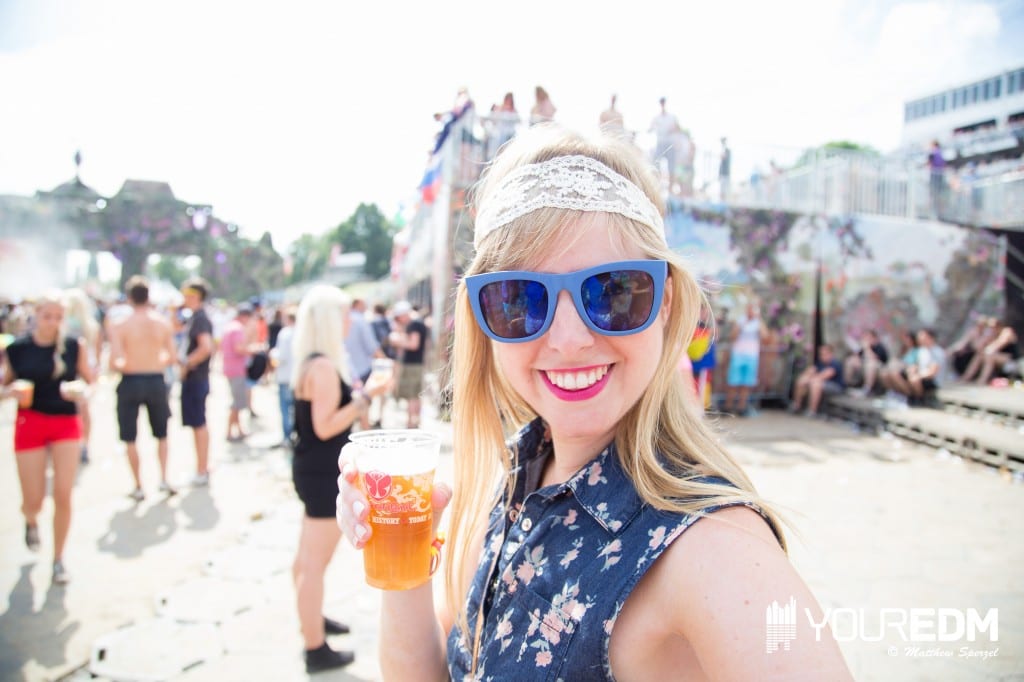 Rusko Teaches You How to Cook Fried Chicken