Unfortunately, it doesn’t exist…yet. Producer, composer, audio technician, DJ, singer…Brian Wayne Transeau (or BT as he’s known to most) is truly one of the most talented and inspiring people in the EDM industry. With the recent release of “A Song Across Wires” on August 16th, BT presents his fans with a 12-track, 76-minute intricate and seamless album. Last month, I had the opportunity to sit down with BT before his show at The Mid in Chicago. Here are five reasons BT isn’t just your average producer.

1) He’s brainier than your high school chemistry teacher. BT has been a music junkie since he began studying piano as a young child…without sheet music. That’s right, he studied a method called Suzuki where learning music by ear is emphasized over learning music by reading. As his musical education continued, it became clear that he had two equally important passions: technology and compositions.

“I think of myself as those two things. And anything that falls in the realm of a need to facilitate those two things, I’ve found a way whether by force or accident to do.”

Fast forward 25+ years later, and he’s one of the biggest names in electronic music with a long list of accomplishments including the creation of his own software company called Sonik Architects and a Grammy nomination for “These Hopeful Machines” in 2011.

2) He’s responsible for trance music as we know it. Before you get your panties in a bunch, just keep reading. When BT started making music, the name “trance” didn’t even exist. And while he had some awareness of house music, it was still very much in its infancy.

“I was playing around with classical music, and I found new wave. I was applying the aesthetic of classical music, specifically its form, to electronic music. And I didn’t know what that meant. Some of my peers would say to me, ‘You can’t do that.’ I heard that so many times in the first 3-5 years of my career. People would say ‘Well you made this song, and then there’s a part where there are no beats…what are people going to do?’ Flash forward twenty years and you see 80,000 hands in the air at EDC during a breakdown, and I’m like….this is what they’re going to do. A lot of my early ideas were very disruptive in dance music.”

3) He could care less about the latest EDM Twitter war. Afrojack and Deadmau5 are fighting. Wolfgang and Avicii are fighting. Deadmau5 and Wolfgang are fighting. Who cares? BT would rather focus on the progress and transformation of the industry and the collaborations and cross-pollination of genres within EDM.

“I love what’s going on in bass music right now, trance as well. So something I look forward to is the trance kids and dubstep kids getting along, and the thing that’s going to mend that gap is the music and the guys like Seven Lions and Fractal and Grizmatik and these guys that are creating trance-influenced bass music. In general, bass music has played such a disruptive part in dance music culture. It’s really inspired me and it’s influenced a lot of what I listen to. This is the first time I’ve looked at my peers and seen a lot of detail in their work, especially some of these really young new producers. This entire record is about me being inspired for the first time in 20 years by dance music. My fans have been asking for a dance music album. This album is really about one feeling – I’m excited to see how my fans expectations of what they want me to do and what I want to do line up. Music is so exciting right now…I feel so lucky to be alive and participating.”

4) His daughter is his wing man. Diplo, take notes. BT’s nine-year old daughter accompanies him on the majority of his touring, having flown over half a million miles in her life and having stepped foot on six continents. And don’t worry, she’s not confined to a tour bus during her travels. BT’s been able to strike a balance between his career and fatherhood. He’s learned how to juggle touring and producing with vacations and family time.

“My proudest accomplishment is being successful as a really involved parent and being able to have a career at the same time. I have a lot of peers who have kids and check out, and that makes me sad because I wouldn’t want to miss any of it. I just do touring differently now. Instead of doing ten shows in a row, now I’ll do two shows on the first weekend and two shows on the second weekend, and we’ll go somewhere awesome in the middle. When I played ASOT Guatemala, we had an amazing time. At the beginning of the week, we were in Belize and we went diving and she got to go scuba diving. Then the second half of the week, we were hiking in the mountains of Guatemala. We’ve slowed down to stop and see these places, and it has enriched my life getting to see places I never would have stopped to see without her.”

5) He’s been there since the beginning. In the late 90s when people like Moby, The Chemical Brothers and The Prodigy were doing band tours in America, BT was also selling out huge venues like the House of Blues Chicago. Then dance music was replaced by genres like hip hop in American music culture. Cut to 13 years later, and he’s playing in front of 40,000 people at festivals like EDC Vegas.

“To see the rise of dance music at home in America, it’s inspiring. It’s amazing to see this incredible growth. That being said, there is something to watch out for as a community. People in venture capital, they look for disruption in a market. We’re in this incredible period of flux, but there’s so much noise in what’s happening. It’s very important that as a community we’re curating what is good. I’m not seeing tightly held reigns on that because corporate America is stepping in and the periphery starts sloping off where we funnel what’s easy to digest. That is NOT what we do. We don’t make 4-minute songs just so they can be played on the radio. It’s fine if you want to make big bottle service club music, but it shouldn’t just be that. And the diversity of our music needs to remain intact. I think we have a tremendous amount of responsibility as a culture to filter as we grow. Producers and promoters have a lot of responsibility to uphold the legacy of house music and honor its diversity.” 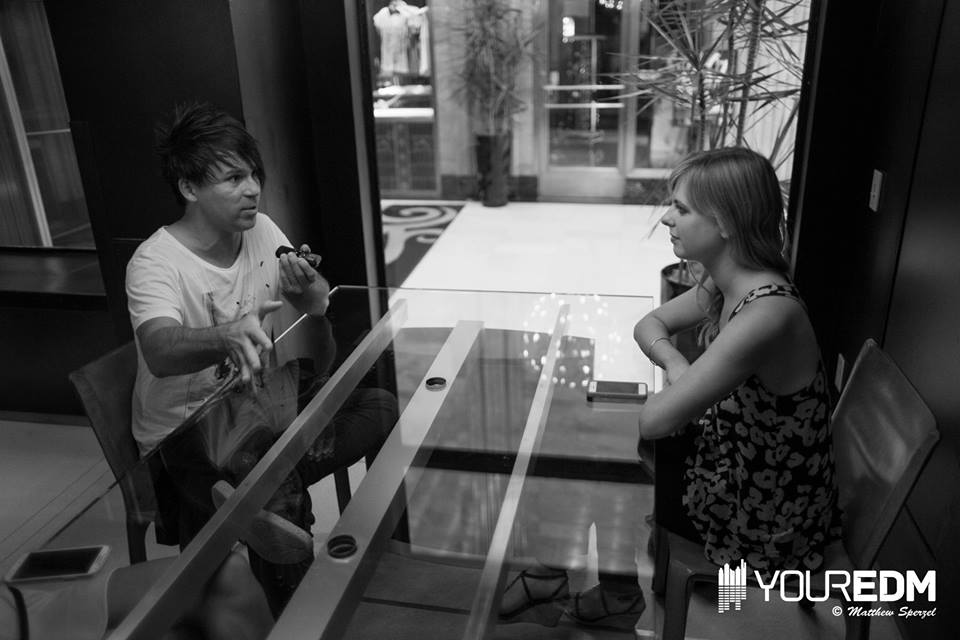 So what’s up next for BT? Where to begin. His biggest focus is writing a series of string quartets…something he’s dreamed of doing for quite some time. He was recently approached by some of his heroes so the dream is quickly becoming a reality for BT. He’s also in development cycle 6 of a 12-14 development cycle burn…a new DAW software application that he believes will change the way people approach rhythm programming and eventually change what people conceive is possible.

“It’s one of the most powerful things I’ve ever seen in my life, and I can’t believe I’m a part of it.”

He’s also scoring his first TV show called “Betrayal” which will be airing on ABC this fall.

“There’s a lot keeping me inspired.”

We can’t wait to see what the next 20 years hold for BT. You can purchase “A Song Across Wires” here: http://www.beatport.com/release/a-song-across-wires-extended-versions/1133838.

My personal favorite? Stem the Tides.

Kaskade Slated To Sing Live On His Tour