It’s no secret that the advance in technology and specifically digital music sales has had a negative impact on the vinyl/CD markets. 2013 marked a significant rise in UK vinyl sales, however, anchored by strong albums from Daft Punk, David Bowie and Arctic Monkeys. 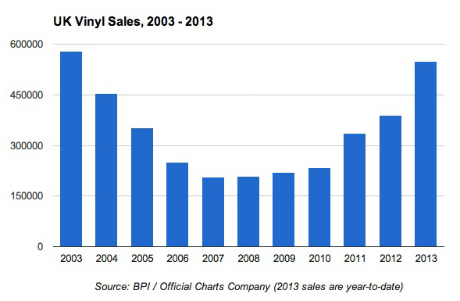 The above graph shows just how staggering this information really is, as nearly 550,000 vinyls have already been sold this year, with end of year predictions stating that the number could rise above 700,000. For more specifics from BPI and all the contributing LP’s check out the report from our friends over at The Guardian.

Now, back to Daft Punk. ‘Random Access Memories‘, which was initially received with significant criticism, has set all kinds of records (no pun intended). Amazon reported that UK record sales have increased more than 100% from last year, this is largely due to ‘RAM‘ becoming the top-selling vinyl since 1999…in just six months. I think an emphatic ‘Congratulations’ is order for the French duo.

If you haven’t already be sure to grab the vinyl LP from amazon, here.