Dani Deahl Speaks Up From Being Put Down By “Bigger” Artist

We all love the Hollywood nightlife especially when it hits Thursday night because we all know its #LURESDAY. Last night Alvaro hit the decks and prior to him was an opening set by the head bangin’ trap, and funky producer that goes by the name of Dani Deahl. We all know we don’t see too many ladies that hit up the decks. Some only have an expectation that ladies should be dancing by the DJ booth and acting like they are famous for some odd reason. On the other hand, when we see females that are playing for the crowd in the club people talk, judge, underestimate their capabilities as a producer. Also, we can even add that somehow men’s testosterone creep up on them and things spiral downward. Just like last night’s incident at Lure in Hollywood. Dani Deahl posted this status on her Facebook page stating the following incident. 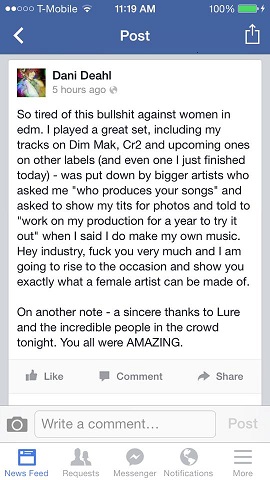 She stated as she was put down by a bigger artist (no name given) with her music, and was also asked she were to show her cleavage and expose herself for photos. Well, once I read this my mind just went on a rampage. Whoever this “bigger” artist is completely has no respect for women or for Dani’s music. Just because you may be a well-known producer doesn’t mean that you should sway your attitude.

Clearly this Chicago-raised producer has amazing talent, and definitely stamped her foot in the dance music scene. Listen to her DSquared Podcast 005 just to prove my point, and hers!