by Chris Wood
in Events

One of the legendary frontman of Dubstep and the EDM scene, Skrillex, just released the dates and locations for his “Takeover” tour which is beginning this February worldwide. Kicking off on the 3rd, Skrillex will hit San Francisco California from then to the 8th where he will venture to Brooklyn from the 10th to the 14th. Wrapping up the tour stateside in both the west and east coast, Skrillex will perform in Amsterdam from the 19th to 23rd! Finally to conclude this takeover which monopolizes every venue within each city Skrillex touches down in, Barcelona will be the last city to receive a four day Skrillex fest from the 26th of February to March 1st!

This 2014 “Takeover” includes many special guest appearances such as A$AP Rocky, David Heartbreak and many more, to see who is appearing where, just click a venue in the city nearest you! There is also an option to buy a package deal in which you can attend all the shows, have a meet and greet and get cool commemorative token items to remember your amazing excursion through the city you saw Skrillex “take over“!

Click the image below to buy tickets to a city near you! 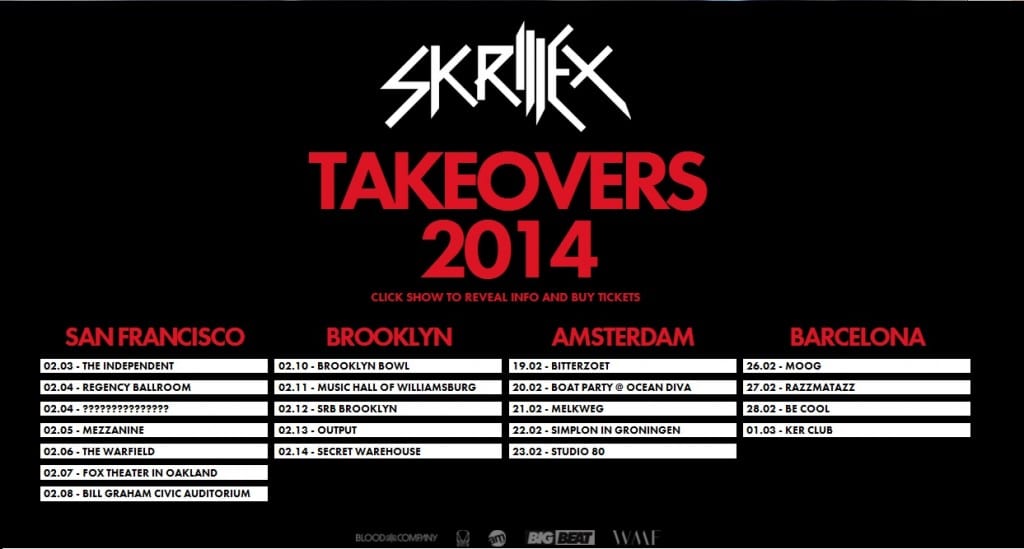