Morgan Page has just ended a breathtaking tour that spanned over 50 cities, including 21 sold out shows. The #MPP3D Tour 2013 was more than just a show, but an interactive experience that left fans in awe. Morgan had also invited many well known and respectable artists to come along his 3D journey like Audien, Project 46, Beltek, Maor Levi, Walden, and Topher Jones. As MTV News said, “Morgan Page’s 3D tour will make you totally forget where you are.” Once the 3D glasses were put on you were drifted into a magical venture as Morgan pioneered your journey throughout the night with pure and vibrant melodies which let your imagination run wild.

While Morgan Page has ended his 3D tour, he now presents a one of a kind bidding opportunity for fans. The #MPP3D Tour Auction, which includes signed gear that he has used throughout his tour, like CDJ’s, mixers and so on. The #MPP3D tour auction will begin January 2 at 10 AM. click here to bid on the gears! 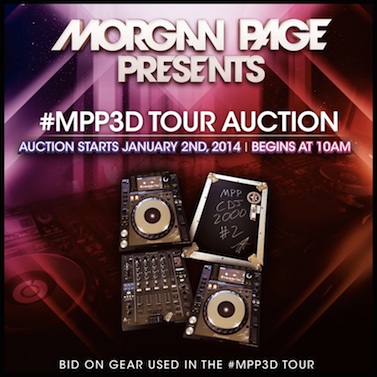