In what sounds like a strange mashup of the most over-played songs from 2013, Sidney Samson and Justin Prime deliver “Thunderbolt” released on…Spinnin’ Records…

Imagine a track which had one sound from all of the big room tracks that proliferated the edm world in 2013. Then listen Thunderbolt. You will have heard what you just had imagined. Now of course there will still be those hype-fans and this is disappointing to say but some big artists in the scene are showing it support, apparently, based on the limited quotes given on the sound cloud page: 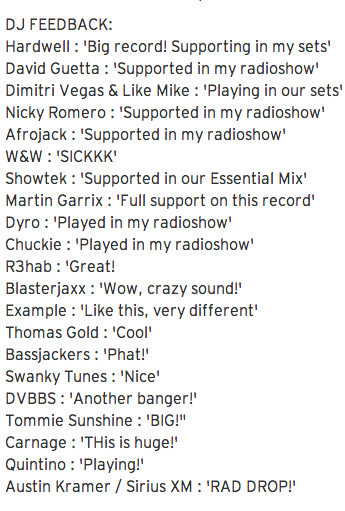 Of course this is all my opinion and I’m sure there will be some supporters of this song that actually like it as opposed to just throwing it in based on a record deal of endorsing fellow artists (yes I know not all those listed above are signed to spinnin’). Overall I just feel like this tune is lacking in more than one area. Play the track below and let me know if you agree/disagree in the comments below.

PS: Is anyone else weary of the future of Spinnin’?