Over the course of last year, a total of $2.4 billion went to investing in the music industry. The electronic boom that the industry has felt has warranted numerous business transactions, however this does not account for even most of the money. One of the main focus points was platforms that deliver music to the ears of listeners via streaming, like with Spotify, who landed $250 million for growth. They make up more than half of the $406 million in total for streaming services.

If you thought that was a lot of money, then you’d be surprised to hear that one deal from Warner Music Group topped the entire streaming total. $765 million was the sum for Warner’s acquisition of Parlophone Label Group, Chrysalis and EMI operations which all fall under one umbrella. These companies aren’t strictly geared towards electronic music, however there were plenty of moves made that are more in line with the music we focus on. 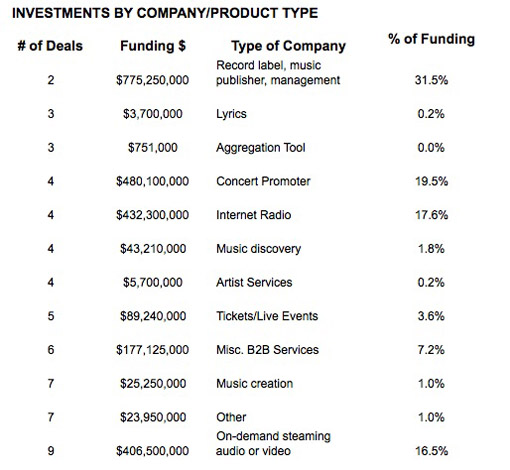 Within the 57 deals made, the second largest investment went to SFX Entertainment, who’s concert promotion scored them $480 million. It was a big year for the company who acquired ID&T, i-Motion and Totem OneLove Group; all of whom promote dance music events. The other big move was the initial public stock offering which accounted for $280 million for SFX.

Besides for these major deals, a lot of the investing went towards start-ups and smaller companies. The most notable being the recently launched Beats Music, who was given $60 million from Access Industries to help get things rolling. Bop.fm, Songdrop, MFive Labs and Shazam also received notable investments; they all contribute to bringing and identifying new music to listeners.

With all this money put into these companies, you can be sure 2014 will be a huge year. The only question being, can the music industry, more specifically EDM, keep up it’s growth? I think that has been a question on all of our minds for a while now. For more details and information head over to Billboard for the full article if you are interested!