by Matthew Meadow
in Bass Music, Dubstep, Featured, Worth Sharing

When I first heard the song ‘Crystallize,’ I was sitting in a friend’s apartment and Pandora was being pumped through some cheap $20 speakers being streamed through an iPhone. As the song began, it seemed to catch everyone’s attention simultaneously. Little by little, everyone seemed to turn toward me. By then, I had already established myself as the one in the group who knew about EDM, so naturally their first question to me was, “Wait… is this dubstep?”

I listened intently. Certainly, the powerful violin caught me off-guard. But I soon caught hold of the kick-snare pattern and the subtle, yet reverberating bass. I responded, “Yup. That’s dubstep.” 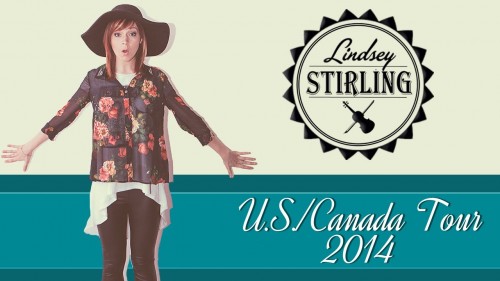 That was two years ago. Now, Lindsey Stirling has released her second album Shatter Me and is headlining her own US/Canada tour visiting over 40 cities in over 30 states spanning nearly three months.

Her own brand of punky eccentricity and undeniable talent has shot her through to the forefront of classical/EDM fusion. There are many acts like Arkasia who introduce an element of classical into their compositions, but none do it with as much focus and determination as Lindsey.

The show in Los Angeles at the fantastic Club Nokia (right across the way from the Staples Center) was one for the record books. Opening the show was singer/songwriter Dia Frampton with her new project Archis. This was their first LA show, and Frampton was in full form as she threw herself around on stage in wild emotion and sheer agony as she sang epic ballads of love and pain. Her raw power on stage has earned her a place as one of my new top female crushes and performers.

It took a long time after Archis departed the stage before Stirling began the real show, but it was well worth the wait. As the curtain dropped, Stirling was shown dancing and undulating to her own beat. She was trained in dance and ballet from a young age, which help contribute to her vivaciousness on-stage.

The show consisted of tracks from her first and second albums. Additionally, she performed a couple of acoustic songs as well as a Legend Of Zelda medley that she dedicated to all the “gamers in the audience.” Dia Frampton came out on stage once again for a live rendition of ‘We Are Giants.’ Lzzy Hale also came on stage for the show closer and title track of her second album ‘Shatter Me.’ So intense was the emotion at the show at this point that, I shit you not, I shed a single tear. Stirling came back on stage to perform an encore of ‘Stars Align’ from her first album.

Overall, I don’t think I have been to a more fun and eye-opening show in a long time. It removed me from my element and brought some seemingly deep-seated emotions to the surface. The production was top-quality and demonstrated a clear vision for the tour and what she wanted to present to the audience. If you have a chance to see her in your city, I would highly recommend it. Find dates and tickets HERE.