How Not to Promote Your Event

by Diane Tamulavage
in Editorial, Editorials, EDM News, Featured, For the lulz, Just For Fun

In today’s overly saturated EDM world, everyone is a DJ. If you’re not a DJ, you’re a promoter. If you’re not a promoter, you’re a blogger. If you’re not a blogger, you’re at least a fan. In some cases, you are a few or even all of these options, and without each of these assets, our EDM world would not be able to spin round. You need a DJ to play a show and you need a promoter to promote the show. Now I’ll admit, I’ve never really dabbled in the promoting-business (and you would not want to see me behind the DJ decks), so I don’t exactly know the recipe to make for a successful event promoter; however, as a blogger, fan, and member of this industry, I do unfortunately know what it takes to be an annoying one.

Below are the top 5 criteria on how NOT to promote your upcoming event in Juneau, Alaska that “is sure to sell out soon” and is “cheaper than online!”

1. Mass messaging random people on Facebook…who you are not even Facebook friends with.

Recently I received a message from an account who has contacted me several times before to promote his shows. 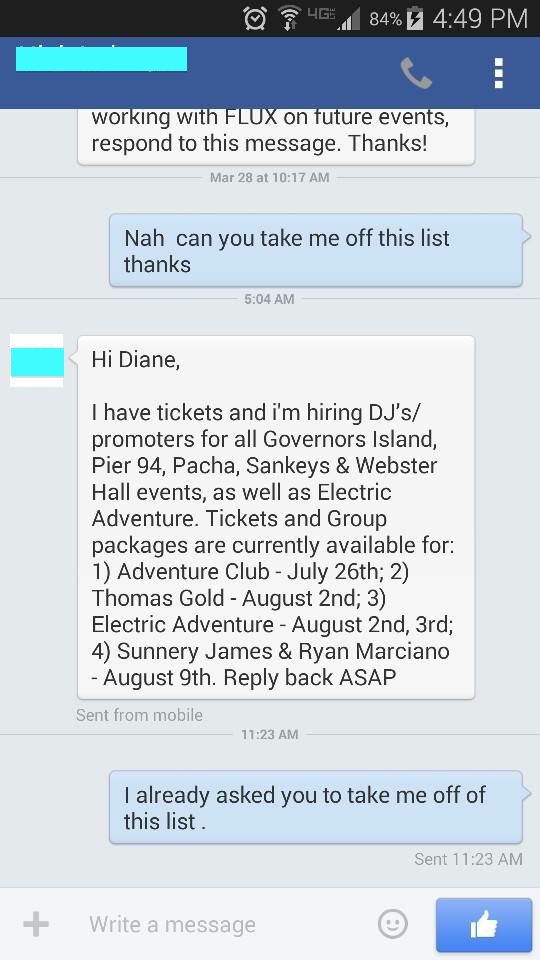 Now I know I could have taken the high road and simply ignored his message, but when this kid has been sending me messages since MARCH and my reply has remained unchanged, of course I’m going to get a little annoyed. And after posting the conversation on Facebook, apparently my internet friends felt the same. 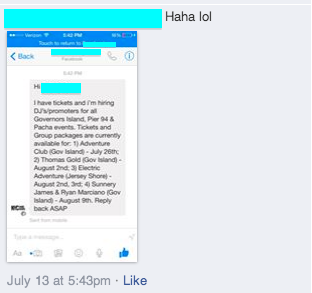 Separately uploaded was a screenshot of the same mass message in a group I’m in posted by another target. 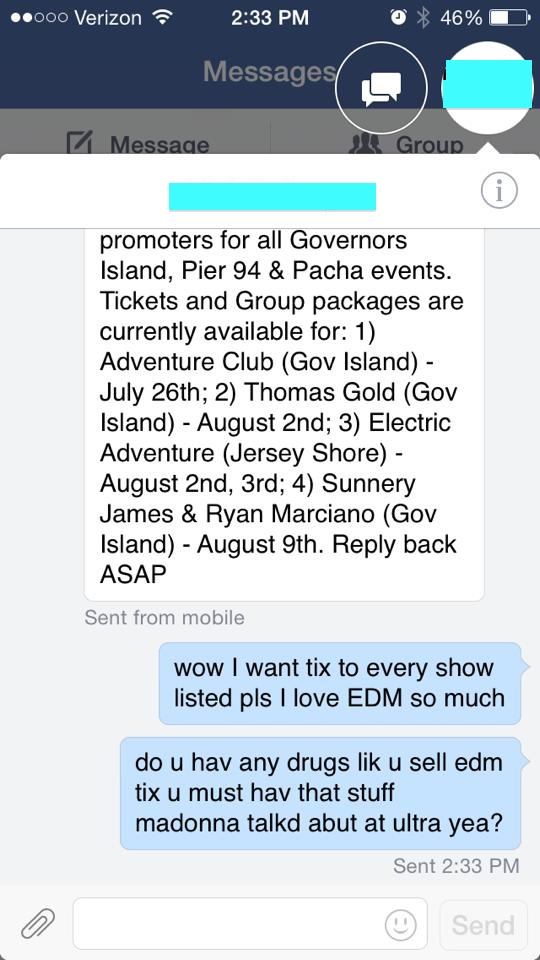 The feelings were similar.

Clearly the tactic of mass messaging every Facebook account in the surrounding states only ends with a very annoyed customer base. Do better.

This one I am 100% honestly and truly guilty of. While I have never been a “promoter,” I was asked on a few occasions to send out invites in exchange for comps…and this broke postgrad will do almost anything for a free show. Although I do have 1500 “friends,” the majority of them are around the country and world. Clearly my friends in San Francisco, Montreal, and Dublin do not care about a Philly event, yet, for the sake of numbers, I sent it to ’em anyway. I used that Facebook code and boom, invited my dear Aunt Sue, my 14 year old cousin, and the Chaplain of my college to a “rave.” I don’t see how this is “effective” promoting considering the majority of my “friends” will not be interested in attending said event…

And while I am being hypocritical here, I really wish my friends in Colorado and Toronto would stop sending me invites to Red Rocks or The Guv.

3. Adding and then tagging every one you know in the poster on Facebook who may slightly be interested.

This one I have to give you promoters props for- that is quite time consuming to tag all 150 people you do. Yet, as one of those victims shamelessly being tagged, we hate it…

Haven’t you ever noticed that out of the 150 tags, maybe only 3 people ‘like’ the post? Even less comment on it. What we normally do is a) untag if we’re ambitious enough to go through the untagging process or b) easily hit ‘unfollow post.’ Bonus points if you’re a promoter AND DJ who also tags all of your friends in your brand new mixes.

4.  Saying anything remotely close to what this guy says…

Earlier today a conversation between a bachelorette and a Vegas promoter leaked (courtesy of Jezebel) . While I understand that Vegas clubs have a certain image they need to uphold, his aggression and annoying tendencies is similar to that of a stage 5 clinger. Just stop texting back, sir. Do less. 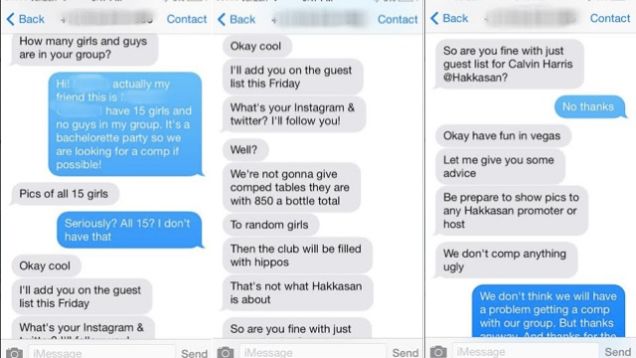 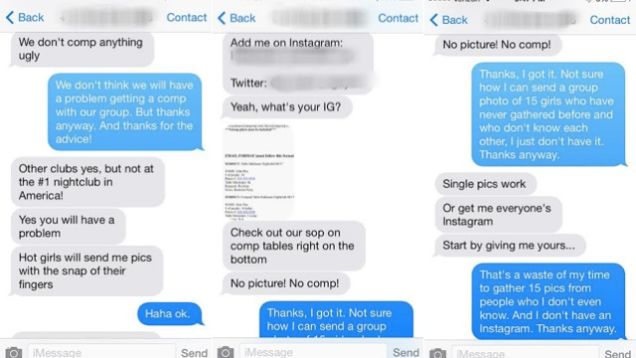 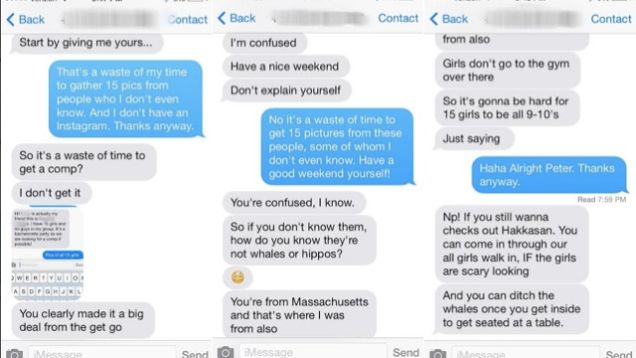 I kid you not, this is a real interaction I had. (The first & last interaction…) 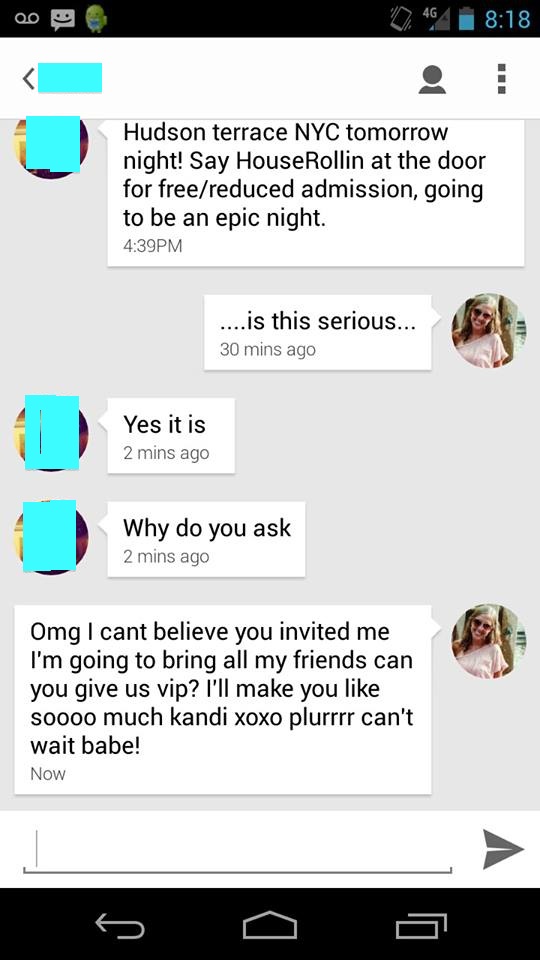 Protip: Don’t make your promo name anything to do with rolling either…

Now we all know at least one of these promoters – be sure to call them out with a tag in the comment section!