Elitism In EDM, The Downfall Of Our Community

With the recent rise in popularity of electronic music, an interesting development has begun to surface ever more prevalently. It is not an issue of laziness in production, or anything having to do with the music. The problem lies in the community.

Those who listen to electronic music absolutely love to brand themselves as open and inviting to others who are new to the scene. Many people find this culture a safe haven from more poisonous environments where their body type, their sexual orientation, or even their taste in music is looked down upon. The whole concept of “PLUR” was created in order to give a name and an identity to that philosophy. For those of you who are not aware, PLUR stands for “Peace, Love, Unity, and Respect.” It is an innocuous enough phrase, and yet it is the only acronym I can think of in which the individual parts are greater than the whole.

There is a very popular quote by Kaskade that gets passed around from time to time, and it says, “As far as music culture goes, EDM is the one who will accept the kids on the outliers, the ones who get bullied, the ones who feel like they may not quite fit in. This community is exceptional in its ability to bond all types together, and I am not exaggerating when I say it saves lives.” 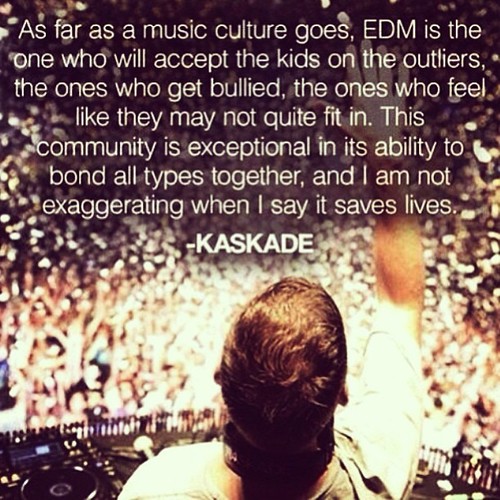 And this is very true. But as with all things, there is another side to the story. I’m talking about the “EDM elitists.” These are the people who will tell you that “you’re not going to a rave, you’re going to a festival.” They will say “You don’t know who Steve Duda is? Get the fuck out.” They will see you at a festival and silently judge you for going to see Avicii as they’re on their way to watch The Polish Ambassador. They are the desert ravers, the PLUR sympathizers, the house purists, the ones who shame you for saying that ‘Animals’ is “actually a pretty good track.” There seems to be this caustic relationship between those who claim to have been in the scene for years and years and those just now finding a foothold.

Part of the issue, I believe, is the current rise of commercial dance music. These are tracks that serve no creative purpose, but rather serve to be played strictly on main stages at festivals to get the crowd jumping. There’s nothing inherently wrong with that — it’s perfectly reasonable, and encouraged, to create music that will make people dance. That’s part of why it’s called “Electronic Dance Music.” What ends up happening though is that festivals like Coachella, Bonnaroo, Lollapalooza, etc. book these superstar DJs to play on their main stage, and play main stage music. As the name would suggest, the main stage is generally the most popular at large festivals, and exposes the greatest number of people to new music.

When someone hears ‘Tsunami’ or ‘CUBA’ at the main stage, two things can happen:

Now, the problem hasn’t really reared its ugly head yet. Sure, it’s reasonable to think that young kids thinking that DVBBS or Dimitri Vegas & Like Mike represent EDM as a whole is detrimental to the scene, but it’s nothing that education on the vast history of electronic music can’t fix. And that is exactly where the problem is. Rather than trying to educate newcomers on the history and legacy of electronic music — the Chemical Brothers, the Daft Punks, the Kraftwerks, etc. — they malign, berate and rebuke those who find themselves as small fish in a big pond.

Now please, do not twist my words to imply that I am speaking of all listeners of electronic music. I would not be so stupid. Remember, I am talking about the elitists here. In a culture that is supposed to welcome newcomers with open arms, we have a rather vocal sect of supposed “experts” and “connoisseurs” who specifically target those who cannot possibly know better. And the funny thing is, so many of these elitists have known about EDM little longer than the ones they are shunning. Just because you learned about Justice last week does not give you the right to call someone out for asking who they are. It doesn’t work that way, or at least it shouldn’t.

Another example of elitism that I commonly see, as I mentioned earlier, are the people who will tell you that “you’re not going to a rave, you’re going to a festival.” This one in particular makes little sense to me because it is of so little importance in the long run. I understand, and empathize with, those of you who actually attended underground raves in the 80s and 90s. I wish I could go back in time and experience them with you, I really do. But it has become utterly counter-productive to belittle someone’s experience or knowledge because they used a word that you think still has relevance. Underground raves are no longer as prevalent and widely held as they were 20 years ago. They’ve actually moved above ground. They are the Electric Daisy Carnivals and the HARD Summers of the nation and the fact that tickets are sold for these events does not diminish their status as a legitimate showing of electronic musical talent.

Furthermore, in a culture that is supposedly so welcoming, why is it that adolescents and teenagers are repeatedly ostracized and left out of the discussion? Elitists will say that they are tainting the scene, that they don’t belong because they spend all night at the main stage rather than explore the stage off in the boonies. Who are you to judge someone for how they enjoy music? Honestly. I am so sick and tired of people who should be mentors for the younger generation attempting to remove them from the culture altogether.

Elitists of any culture will inevitably taint the culture they are trying to preserve, and it’s very unfortunate. Their wealth of knowledge and experience could be much better suited to educating the younger generation on electronic music before it was EDM, and yet they insist on continually resting on the coattails of their “one time at that warehouse party.” If we are to survive as a culture, the education and welcoming of newer listeners should be of tantamount importance. As it stands now, it’s not the drugs and kandi-bitching that will kill the scene. We’re dying from the inside out.