On a hot, sunny Friday afternoon in New York City, Your EDM had the chance to sit down and chat with Hook N Sling after his Electric Zoo main stage set. The festival had just opened hours prior, but the energy was already starting to pick up on Randall’s Island as Hook N Sling took over the decks with an enthusiastic gig. During our conversation, Hook N Sling was eager to discuss what it was like performing, his upcoming releases, and where he thinks the sounds of dance music is headed. Today Your EDM is proud to present the exclusive premiere of Hook N Sling‘s Club Mix of his remix of Lana Del Rey‘s Ultraviolence.  Check it out below as you read through the interview! You can purchase his remix of Ultraviolence on Beatport.

What was it like to perform Main Stage East at Electric Zoo this year?

It was good. I managed to be here at a time when it wasn’t too crazy. I kind of got on stage before the crazy started happening, and then towards the end of my set, you saw it was getting a bit wild out there, which is great. It was great; perfect time of day. I love playing outside while the sun’s out. Coming from Australia, I’m used to it- love hot weather.

Your remix of Lana Del Rey’s Ultraviolence is coming out soon, what inspired you to remix that track?

I was lucky enough to get off with that remix. That doesn’t always happen. Sometimes I have to hunt them down or I have to work harder to find a mix that I love, but that one came through from her manager who offered it to me to see if I wanted to do it and I jumped on it because I liked the record and the album is really cool too.

You also have a few original releases coming up before the end of the year, what can your fans expect from them?

Well I’m trying to push a new sound. I really want to do something fresh, not like completely different. It’s still my style. I’m trying to push a new big room sound, which I’m really happy with. The next one comes out in November and then we’ve got a few more planned but I cant really announce any. But I have a great collaboration going with Sultan + Ned Shepard, which I’m really buzzed about. I played it today. It’s probably going to play on the radio. They played it on Sirius already because they broadcasted the gig. I played it right in the middle [of my set.] I announced it too, “This is my new shit!”

What do you predict the next big trend in dance music is going to be?

I don’t know. *laughs* … to be honest. Making these predictions, I could say like jam tempo or deep house is going to be the next big thing but no one really knows until some of these producers take inspiration from these new movements that are coming through and they create a new sound; because the inspiration is obviously coming from one of these new movements that are coming through, like house music or even bass music, and I think once that funnels into a big room sound, which is the kind of stuff I play, then what is going to be up next…I have a feeling it’s going to be a very mix mashed kind of sound. Like it’s not going to be a progressive sound or it’s not going to be a deep sound because we’re at a stage now where I think every one is taking a lot of inspiration from a lot of the genres.

So is that kind of where your new style of sound is going?

That’s kind of how it’s going. Very melodic. And then the drops, for me anyway, are a mix mash of stuff that I’m inspired by right now. 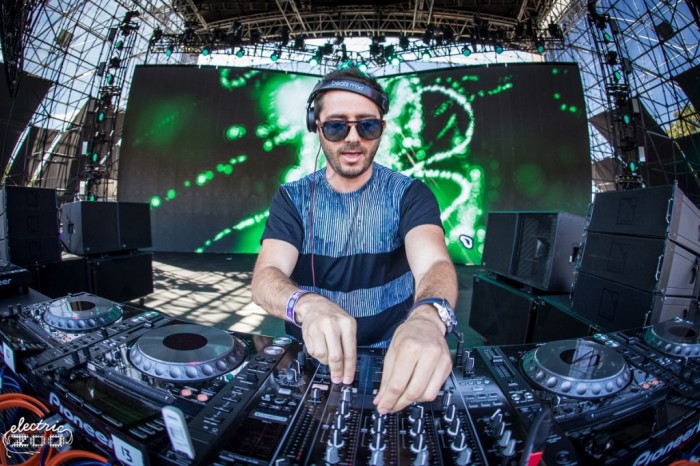 What’s the weirdest thing you’ve seen happen at a show or festival?

Oh, umm, I was DJing once in Australia and I saw people climbing….people climb on things in festivals. They all go a bit crazy. Me included –I’ve done some stupid shit. This guy was climbing scaffolding like 80 ft in the air just to get a better view. I’ve seen crazy shit like that. What else did I see? I’ve seen people fall off of stages. I’ve seen golf carts crash and people fall out of those. I’ve seen fights. I saw Steve Angello in Australia play ping pong or football out the backstage and every one started throwing the ball and someone threw the ball too hard at Steve Angello and…well…you can’t fuck with Steve.

Do you prefer festivals or small intimate shows?

I love festivals but I have to say I love playing to a crowd that I can even hang out with. I’m going to go take a walk out there right now. I want see a few DJs playing. I want to check out Otto Knows; I know he’s playing soon. I saw a bit of Firebeatz. New World Sound. Other Australian guys. There are some house guys I wanted to see. I’m going to go walk around and see stages.

What do you think makes Ezoo unique from other festivals?

The fact that it’s right in the middle of NYC!

ZHU Being Teased For HARD Day of the Dead