The Most Often Booked Dutch DJs

It’s no secret that Dutch DJs rule the world. The Dutch have been responsible for giving the world some of the top performing DJs of the current era including the likes of Tiesto, Hardwell, Fedde Le Grand and many more. While the Dutch DJs continue to travel the globe and spread their music, it is important to track the changes in influence they carry throughout the years.

Netherlands based company Buma/Stemra, an organization that represents the general interests of musicians, released a full scale report highlighting the trends in international bookings seen among Dutch DJs throughout the past few years. Because it takes a very long time to accurately account for the international travel of all Dutch DJs, the company has only just released their findings from the year 2013. While Buma/Stemra continues to compile their report for 2014, we can still see the overall trends start to appear as we compare the numbers to the previous 3 years.

After examining the data, it would appear that Dutch DJ’s actually played less international shows in 2013 then the previous year on a roughly estimated scale. Whether this is due to higher booking prices, less demand or just a cut back on touring life still remains to be researched.

In the meantime, below is a list of the top booked Dutch DJs and a screenshot of the report issued by Buma/Stemra. Make sure to check it out:

You can check out the trending report below: 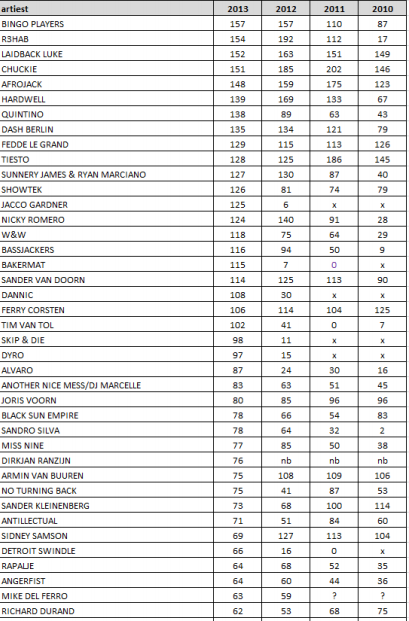 Zedd Makes a Fan's Day by Getting Her Tickets To Counterpoint