FireChat Brings You The Best of SXSW “Right Now”

Open Garden, the creator of FireChat, announces today that the popular off-the-grid messaging app will provide live interactive news at the SXSW conference.  The FireChat SXSW edition is available today.

Attracting more than 80,000 attendees over the course of 10 days, SXSW is a myriad of parties, panels, events, and performances – many happening simultaneously throughout the city of Austin, Texas.  FireChat will help attendees get the most out of SXSW by highlighting the very best of “what to do right now” at any time.

The FireChat app enables live and interactive communications between attendees, speakers, tastemakers, and artists.  By tuning into FireChat, people will know where to find the most popular shows, the best food and parties, celebrity sightings and everything else that is happening at that very moment.  Anyone at SXSW can also start their own live discussion about the panel they just attended, the celebrity they just saw walk by, or their favorite DJ.

The new FireChat introduces a new type of hashtag: “chat-tags.”  Unlike social messaging apps that use hashtags as a way to filter a feed of information, FireChat’s hashtags allow people to instantly create or join a live discussion on a specific topic, simply by typing a message.  These live discussions can gather as many as tens of thousands of people.  This makes FireChat an ideal way for people to instantly reach a very large audience.  In addition, these chatrooms work with or without Internet access.

“From Burning Man to the streets of Hong Kong, Delhi, Moscow, Paris, and Manila, I’ve always been surprised by how people use FireChat,” said Michael Benoliel, cofounder and CEO of Open Garden.  “SXSW attracts a very interesting crowd of creative and tech-savvy people.  I can’t wait to see how they use FireChat in Austin to make the most of the event.”

FireChat is a free application for Android and iOS devices.  Join the live SXSW discussions now by following this link on your mobile device: http://firech.at/SXSW & http://firech.at/YourEDM

About Open Garden and FireChat

Open Garden, Inc is a San-Francisco based startup dedicated to connecting the next billions of mobile devices with peer-to-peer connections.

FireChat is the first messaging app that works off-the-grid.  It enables people to communicate even without any Internet or cellular connection, by allowing mobile phones to create their own peer-to-peer network.  Launched in March 2014, FireChat has reached the top 10 amongst social networking apps in 124 countries around the world.

FireChat has been selected as a finalist for the prestigious SXSW Interactive Innovation Awards in the “Innovation in Connecting People” category. 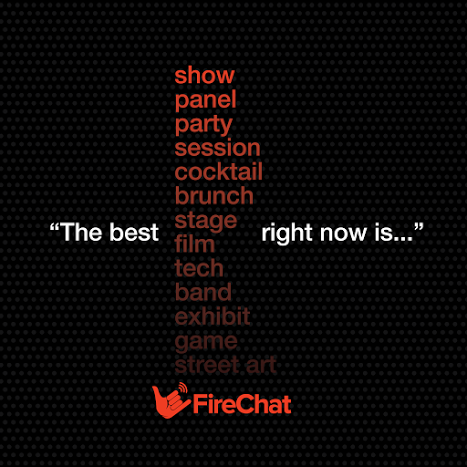 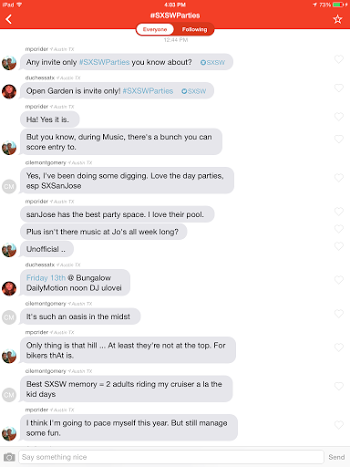