I remember my birthday a couple years ago, trying to get tickets to see Radiohead at a fairly small venue in Santa Barbara, CA. I knew when tickets went on sale, and I had my browser open and ready to purchase, finger hovering above the refresh key. Even still, tickets remained elusive and I wasn’t able to secure any.

Though not as big as Radiohead, Kaskade also has the unique ability to sell out shows in minutes. Fans were understandably angry as Kaskade’s Redux show in Miami on March 28 sold out in a matter of minutes. However, it seems their anger is misplaced.

At just $40 a ticket, the supply was swooped up fast – Kaskade even made sure to remind fans to be ready to purchase tickets right when they went on sale, but it seems people are still angry.

Kaskade responded on Twitter, removing the blame from himself, essentially reminding fans that he had done all he could to help them, but that it was out of his hands. 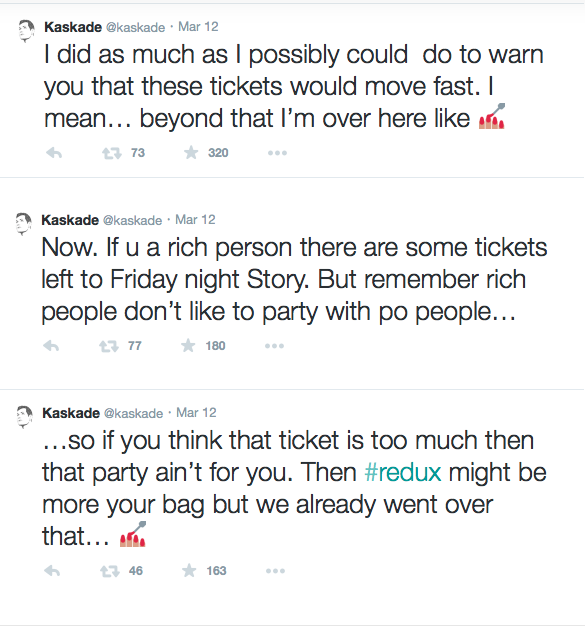 As Kaskade says, fans can still catch him at Story Nightclub on the 27th, though at exorbitant prices – $75 for the ladies, $200 for dudes.

New Show in the Works for DVBBS

New Show in the Works for DVBBS