Astronaut’s & Barely Alive’s Rivals EP came out yesterday. Why am I just getting to writing about it late tonight? I’ll tell you why. I spent basically all day listening to it yesterday.

Influences from both duos are readily apparent. I found myself thinking, “Oh yeah, that’s a Barely Alive effect right there.” The next moment, I would hear something from Astronaut, or vice versa. Collaborations can work two ways – producers can work together to create something completely new that is a combination of both styles; or they can each use their individual styles piecemeal. For the most part, Rivals is the latter, but that’s definitely not a bad thing. Each track is fully polished and, honestly, being able to point out the times at which you can hear the styles switch is really fun.

And even more so, that style of production basically perfectly fits the whole concept of the EP: Astronaut vs. Barely Alive.

Listen below. And buy on Beatport and iTunes.

In addition to the EP, Astronaut & Barely Alive have released a free game via the Play Store and App Store. If you’ve ever played a flash game on Newgrounds, you’ll find yourself right at home with this one. (My age is showing…)

You play as either #TeamEggplant or #TeamHamburger and work to collect good items while avoiding the bad, all the while upgrades and downgrades are mixed in. If you’re the type to play mindlessly for hours attempting to get a high score, this game should be perfect for you. My one gripe is that on Android, the ad at the top directly covers my score so I have to wait until the end to see what I’ve gotten – but it doesn’t affect gameplay, so whatever.

As an added bonus, when you reach the Score screen, screenshot your score and send a tweet to @astronautuk, @BarelyAliveUS and @disciplerecs for a chance to win a one-off signed and framed piece of concept art! Seriously though… they would look great on your wall. 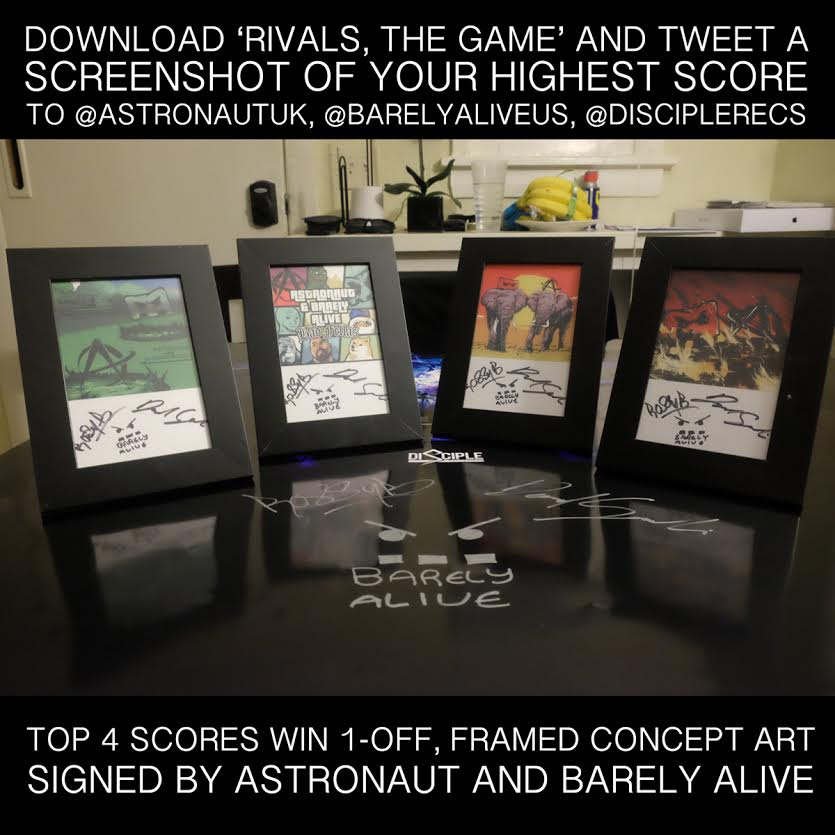