Your EDM Sits Down With Beatgasm President Jeff Rimmer

This year, the cost to party with all your favorite DJs in South Beach wasn’t an arm and a leg. It was Free.99. A new streaming app, Beatgasm, held their official launch party by taking over The Clevelander Hotel during Miami Music Week, giving fans exclusive access to some of the sickest parties for free, as long as they downloaded the app. Big labels like Astralwerks and OWSLA hosted showcases featuring Porter Robinson, Markus Schulz, Afrojack, and a laundry list of others. Your EDM visited Beatgasm HQ to check out the festivities as well as sit down with President Jeff Rimmer for a one-on-one chat about how it all came together.

So tell me how the energy has been this week at The Beatgasm Hotel?

Yeah it’s been really dead (laughs). The energy’s crazy, everyone’s really pumped up for this. We’ve been getting a lot of great buzz and fedback about the app which is what I’ve been really excited about and obviously the kickoff party. Good energy from all sides.

How many people do you guys have on staff for this event?

Not enough! Between The Clevelander and our staff , there are well over 100-120+ people and everyone’s working around the clock – long shifts, long days for four days in a row, but everyone’s still in great moral standing. They’re all still really excited even though they’ve been here for 20 hours straight.

So how many downloads have you had so far this week?

I have no idea. I haven’t even had a moment to check since the party started. I would hope we’d have 20-30,000, somewhere in that range. Based on social media, from the artists RTing us and people tagging their images, hopefully it’s beyond just the people in Miami and everyone else in the country is downloading the app now too. I’m waiting until this is all over to sit down and check the final totals. I really hope we’re at 12 million though. 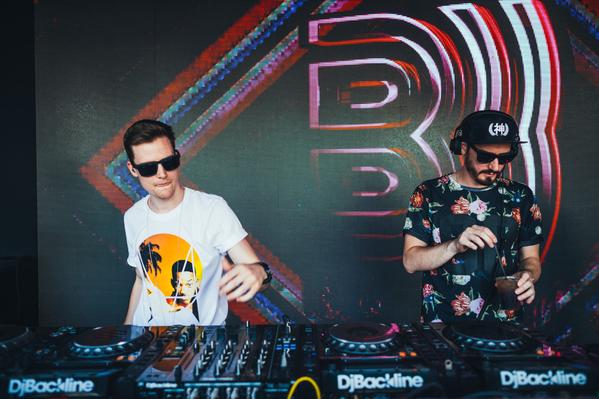 Based on your strong social media push paired with all the advertising here on South Beach, do you think it’s safe to say this has been a success?

Absolutely! I took a a couple minutes to take it all in and see how it was going today. It’s all flowing so well and I’m really proud of everyone here.

Where did the idea of a hotel takeover come from? Avicii did something similar last year but it was in no way as big and as busy as this.

It was a combination of all of the ideas from our team. We sat in a room and were trying to figure out what can we do . We were supposed to launch last year and finally it came together in time for this year and I remember the Avicii hotel and I think that’s what sparked the idea. Somebody in the room said ‘let’s takeover a hotel,’ but instead of just changing the sign out front, let’s do everything: rebrand every tiny piece and bring all the DJs that really represent the app and what we’re trying to do with the app and make it a blowout. And nothing’s more fitting than throwing a 4-5 party for a dance music app

What sets you apart from all the other apps?

Mainly we’re amazing, every single one of us (laughs). But really it’s a couple of things. You can go into our app and our web player and see local cities. For us that was really important because electronic music is so different in every city. In Miami minus this week, the sound is different and in New York it’s very different, etc. We really wanted to capture the community itself, so for each smaller community of fans who live in that area and support their area we wanted to capture that. Beatgasm NY is all about the New York sound and all about the New York DJs and the guys who are in those clubs and their mix shows being on those stations and things like that. We really wanted to localize things and that’s very different. I don’t know any other digital platforms that are streaming music that really care about that anymore, and in dance music that makes a lot of sense as far as we’re concerned.

Another big thing that is really going to escalate and as we progress is the music discovery side to it, and this was really personal to me because I had this DJ name – Nocturnal Intensity – and I made this music that was really badass, the greatest thing you’ll ever hear in your life. And by greatest thing I mean the worst, and even though I knew guys at labels and I never made it. For me, being able to create a platform where music can be heard was key and that’s what we’re doing here at Beatgasm. Instead of uploading your track to Soundcloud or one of those other guys and then still having to self promote and send your links out, people upload their tracks and then our team of curators who are DJs program the music into the stations with the big level and mid level guys so that it’s heard. And that’s exactly what this hotel about, bringing all those guys together in this one place so that everyone can be heard from different levels of discovery. 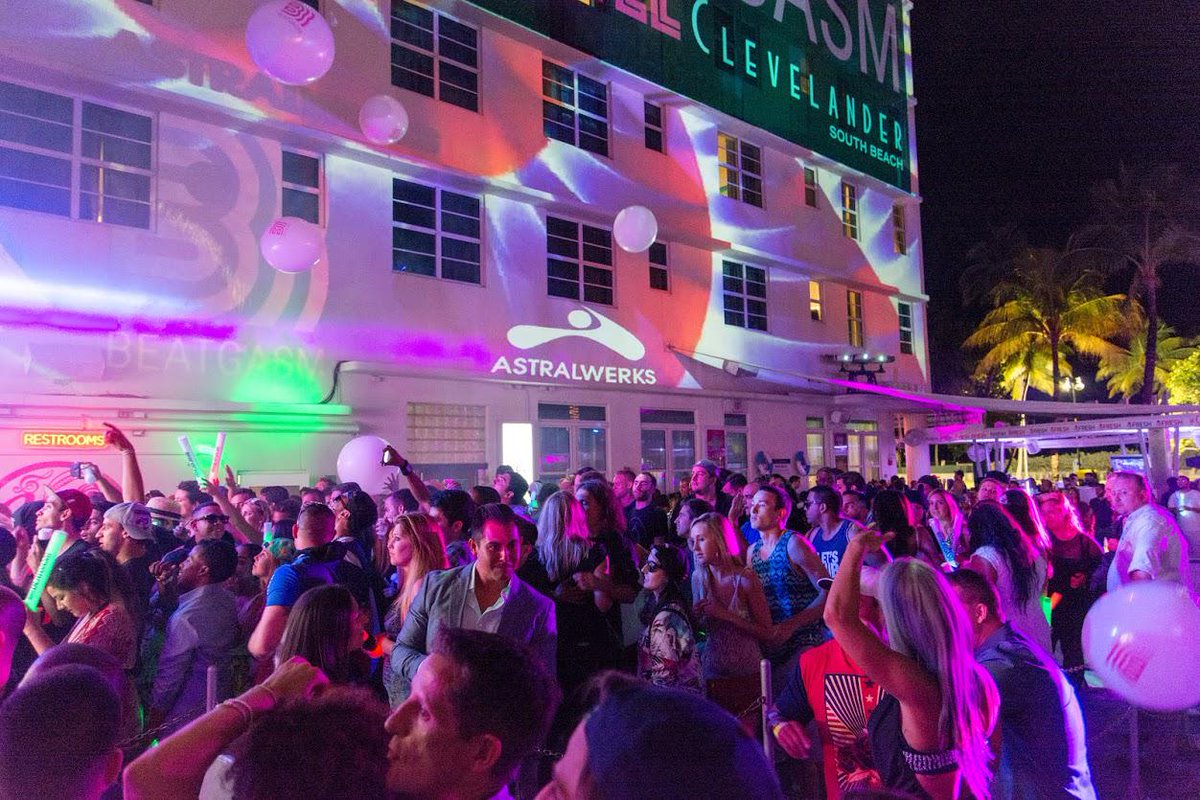 So what went into the selection process for each event? You have major labels like OWSLA and Astralwerks being represented this week.

Really good partnerships, going to the labels and talking to each of these guys, and finding the right partners who wanted to team up with us from the start. These guys have a lot of up and comers as well as their big stars and it was really a no brainer to loop them in and throw label based parties over the course of the four days. These are people who are really in line with what we’re trying to do.

What are your short and long term goals for the Beatgasm app?

Short term goal is to get to 12 million users (laughs). No but really, short term goal is to get through these next two days. This is our coming out party; I really feel like we’re making a buzz, but I haven’t left South Beach at all so I don’t really know what’s going on as far as our name goes. The goal is to continue to grow the buzz we’ve been creating here this week, and continue to update our platform. We have some cool shit on the way that will be coming out.

Long term goal…? The music discovery piece will continue to grow tremendously to music collaborations so artists can collaborate with other artists within the Beatgasm platform itself, and then to expand internationally. Obviously there’s so much more music out there in so many different cities in countries we can do big things in so that’s currently on our radar, to continue to move towards that is our goal.

Will we be seeing label sponsored nights or Beatgasm tents at other festivals this summer?

Dance music is all about the experience, that’s what people come for and for us we wanted to create a digital platform that’s still connected to experience and that’s what this is all about – making sure there’s a real life experience attached. So to answer your question in a very long way: yes. We are going to tie into festivals when they happen but not be attached to them or be inside them. We’re going to throw our own party, do it by our rules and make our own name. If we would have looped into Ultra and bought a tent and went over there, I don’t think the same kind of buzz would have been generated. For us, I don’t want to be restricted to what everyone else and we want to continue to do events in the local cities we’ve chosen and we have New York, San Juan, and LA lined up to start doing events we’ve already started planning.

I know the week isn’t over yet, but what has been your favorite event so far?

I’ve said this before, and I’m going to keep saying this until someone else comes along and blows my mind. There’s an 11-year old kid named Aiden Jude. I met his dad and his manager a couple of weeks ago in New York and they asked if there was any space to fit him in to what we were doing. We have two levels here so I put him on the rooftop to start and I watched him for a couple of minutes and immediately he blew me away and I was like cool we gotta make some space for him downstairs. We cut some time for him because he was killing it and dude gets onstage and everyone’s kinda standing around really skeptical because they announced him as ’11-year old Aiden Jude’ and he starts playing this song and something hit me; I had no idea what was going on and he was really playing to the crowd. That’s exactly the music discovery side I was talking about earlier. The big guys, they all had to start somewhere, and we appreciate those guys but we also appreciate the ones who no one knows about – 11 or 45 years old – that blow it out of the water too.

So what are some things that we should be looking out for after Miami Music Week?

We’re doing a smaller partnership out of Coachella in the surrounding area. As far as the app goes, look for a community element, very social…those are buzzwords that people use but we’re gonna do it in a cool way. I don’t know if it’s different, but it’s different in a sense that it’s connected to dance music and the dance community. People will be able to engage and interact with each other but also interact with the artists and the artists can interact with them in a way that’s never been done before, and I’m speaking in code for a reason, but there’s some cool things happen.